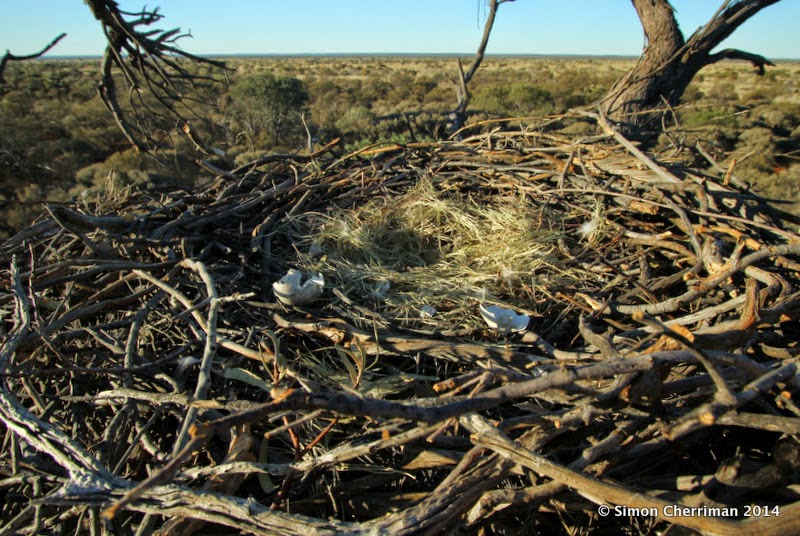 Smashed eggs! Never a nice thing to find on any bird's nest that you have been monitoring with the hope it will soon house an eagle chick. However, such findings are to be expected and teach us a great deal about both the bird and its environment.

Above you can see a clutch of Wedge-tailed Eagle eggs that have been pecked apart by crows (judging by the beak size and shape, shown in detail below). This is not an example of predation - crows are unlikely to be game enough to 'eat from the lion's den', given how regularly they appear as eagle food. It is instead an indicator that the eggs were probably left exposed, which points to a desertion by the incubating female after she was forced off the nest in search of food. Clearly her mate was not hunting regularly enough, and perhaps there was not much to hunt.


It is easy for us humans to imagine that when birds breed, they incubate their eggs and produce young successfully with each attempt. However, the truth is that life in the wild is never easy, and it is naive to think that every bird succeeds at every breeding effort. A range of factors influence breeding success - food supply, weather, time of year, age and experience of the bird, predation, human disturbance, to name a few - and one or more of these can come into play for any pair of birds at any time. Successful breeding is indeed a miracle!

Being relatively long-lived, large raptors such as eagles do not need to breed every year, and in many cases they will not even attempt to do so unless conditions are perfect. Our research at Matuwa (Lorna Glen) over the past few years has shown that only about one third of the 35 or so eagle pairs will lay eggs each year. These pairs are in territories where local conditions suit reproduction. Other pairs remain present as long as their is enough food to support themselves, and only breed in good seasons (as published by Michaels Ridpath and Brooker in the 1980s, and Graeme Robertson, in 1987).


Laying eggs is only the first step. Assuming both eggs are fertile (often one isn't), an incubating female must be provided with enough food to sit for 6 weeks before the eggs hatch. Then if they do, there is high demand from a growing eaglet for a constant supply of 'portable' prey for the next 3 months. In an arid environment like central West Australia, there is a minimum prey threshold required for eagle breeding. It is only after good seasons (sometimes one or two years after rainfall events) that this threshold is met, and it must be maintained from the onset of laying (May/June) right up to after fledging (around November).

In the last three years we've found that in most cases, arid eagles do not even hatch their eggs. The nest is deserted before hatching, leaving the eggs exposed, and scavengers like crows eventually break inside and consume the contents. In past years I've checked nests in November or December, by which time any evidence of eggs has gone (if they were abandoned in July or August. The state of the nest platform, and its lining, can tell us whether or not the eagles have bred in any given year, but that's another story!). However, this nest was inspected in late September, and the broken eggshells were still there to tell us their story.


**In case you are wondering about 'researcher-induced failure', here is some more information. When I mentioned 'monitoring a nest' at the top of this post, you might think 'are nests climbed during incubation and could this be a reason for the eggs' desertion?' In some cases, nests are climbed during incubation if we are unsure of their contents, but mostly climbing is avoided until chicks have hatched. However, failures that have been recorded at climbed nests have occurred in the same season as unclimbed nests, and there is no evidence in our studies which attribute failure to climbing. If flushed, an incubating female is often observed returning to her nest to sit again. And we have found broken eggs or shell fragments on many nests that were not even visited (let alone climbed) during the incubation period, but checked later in the year. The above photos show a nest that was visited and climbed for the first time in 2014 in August. The last time it was climbed was in October 2013 in a year when it had also failed. In 2012 this nest had 2 chicks in August, and when inspected in December that year, contained a dead nestling aged ~7 weeks, whose death we attributed to heat after a prolonged period of daily maxima above 46˚C. Prey abundance is clearly low in this territory although the resident eagles are regularly observed within it.
Posted by Simon Cherriman