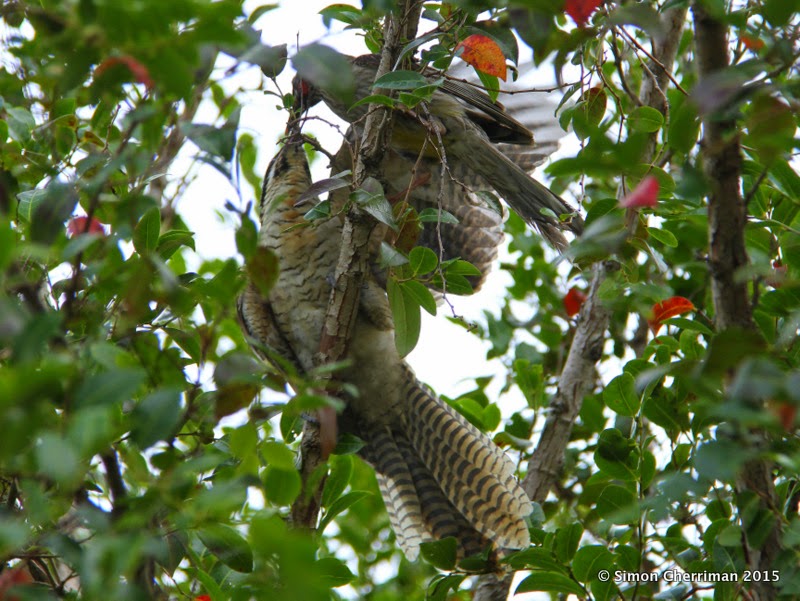 Like a lofty, obese teenager putting an arm around its tiny parent, this cuckoo chick barely notices the food morsel go down its throat as it flaps its wings and continues begging, even though the collection of insects in the mouth of an unsuspecting surrogate mother makes her cheeks bulge! The large bird visible in this photo is an Eastern Koel (Eudynamis orientalis) chick, one of the eleven species of cuckoos known to occur in Australia. But who is the bird you can see here feeding it?

On a recent walk to the local shops near my Christmas accommodation in Sydney, a repeated begging call caught my attention, and I looked up to see a large and beautifully marked bird. I recognised it as a cuckoo but not having seen a Koel before (they do not occur in the south-west where I live), I had to check my field guide to confirm its identity. Rushing home to grab my camera, I returned to find the bird gone, but it didn't take long before I honed in on its begging call and found it in a tree not far from my first sighting. I then waited to see who would come in and feed it.


It only took about five minutes for an adult Red Wattlebird (Anthochaera carunculata), a large and very well known species of Australian honeyeater, to fly in with food, quickly feed the chick and then disappear. It flew up to the canopy of a large Eucalypt where it began busily foraging among the foliage. A second wattlebird (which later proved to be the Koel's other 'parent') quickly flew in with another mouthful of insects, which seemed to have little effect on the cuckoo's appetite. Its real parents were nowhere to be seen - they were probably off looking for fruit to sate their own hunger. But how did they come to deceive the wattlebirds?

Cuckoos are certainly clever birds. When the breeding season spreads across the Australian bush, cuckoos migrate from their wintering grounds  - in the case of the Koel, this can be as far north as Papua New Guinea - an arrive in southern breeding areas. The calls of several species of cuckoo can often be heard ringing from the tree-tops, such sounds being a telling sign that spring has arrived. Male cuckoos call to attract females, who, after mating, seek out the nests of another bird in which to lay a single egg. Different cuckoo species have their own targets, depending on the size and shape of the nest. Koels seek out species which build fairly large, open 'cup-shaped' nests, including wattlebirds, friarbirds (another type of honeyeater) and magpie-larks. An egg is dropped swiftly into the host's nest, often after one of the existing eggs is removed. Even if the nest owners catch the female cuckoo in the act of laying, they do not usually suspect anything is wrong, as the cuckoo egg normally has similar markings to those in the target nest. (They will, however, attack the female cuckoo and chase her away, especially if they have seen her remove an egg, which host birds simply think is an act of predation. This is why you see many songbirds chasing or mobbing cuckoos in the same way they do Kookaburras, ravens and raptors - they have learned to recognise those species capable of predation). The cuckoo egg has a shorter incubation period that its new 'siblings', and once hatched, instinctually expels the other eggs in the nest. It then proceeds to grow and grow and grow, taking all the food for itself, and creating a huge 'shopping bill' for its poor surrogate parents! The sad thing is that, again because of instinct, the hosts often attack other would-be predators with great gusto, defending the cuckoo chick as their own. After all, it came from their nest, and hatch from their eggs. Didn't it!?

Although we often feel sorry for birds which are 'cuckoo-ed', this method of reproduction is certainly ingenious when it comes to getting the best 'bang for your breeding buck'! It also provides another example of how amazing the natural world is, and how different animals have evolved such a variety of strategies to succeed.