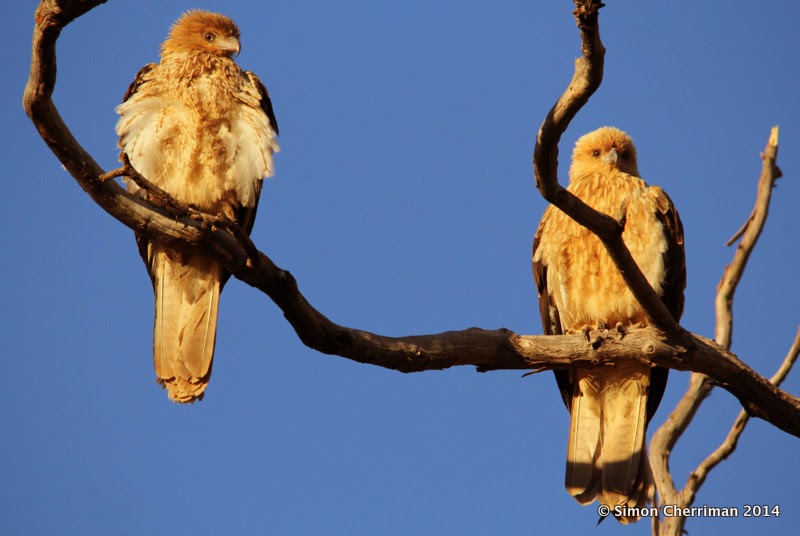 When you uncurl yourself from a warm swag and step out from under the homestead verandah, not many things make such a beautiful morning scene as a pair of wonderful birds of prey!

I've just returned from a fortnight doing eagle research in the arid interior of WA and one of the bird species I saw daily was the Whistling Kite (Haliastur sphenurus). The scientific name comes from Hals (Greek for 'the sea') and astur (Latin for 'hawk'), sphen (Greek for 'wedge') and urus (Greek for 'tail'). The species does have a slightly wedged tail, although nothing like that of our largest eagle! Whistling Kites are usually found near water, but on outback roads they may be seen circling over road-killed animals in dry areas, sometimes in small flocks. They can be distinguished in the field by the way their wings bend downwards at the tip, and a unique 'floating' flight, hence the name 'kite'. The species' call is a long whistle, followed by a series of shorter, ascending notes, and they are Australia's most vocal bird of prey. Not many other raptors call like a Whistler!

Above you can see a male (left) perched next to his mate, one of four pairs I've kept track of for the past three years. The slight plumage difference is probably due to age, with the male being darker and hence younger. This pair spent the pre-dawn period of  each morning adding sticks to their nest, then took advantage of the first warming sun rays to bask, preen and watch small birds flying around their nest site. Being nearly September, the timing is right for the female to lay her eggs very soon, and these will take about a month to hatch. Last October at the same study site, I climbed to the nest of another pair of Whistlers to check for prey remains, and was greeted by a tiny chick emerging from the egg:

This chick is still moist and totally helpless. You can see its eyes ('blue' section of the head on the right) are still closed; these will take several days to open, by which time the second egg will have hatched (like most raptors, Whistling Kite eggs are laid one or two days apart, leading to asynchronous hatching). The chicks' down feathers will slowly dry out as the female kite broods, and they will rely on her to keep them warm for the first one to two weeks. After taking this photo, I quickly descended the tree and watched as the female kite flew straight back in and resumed brooding. 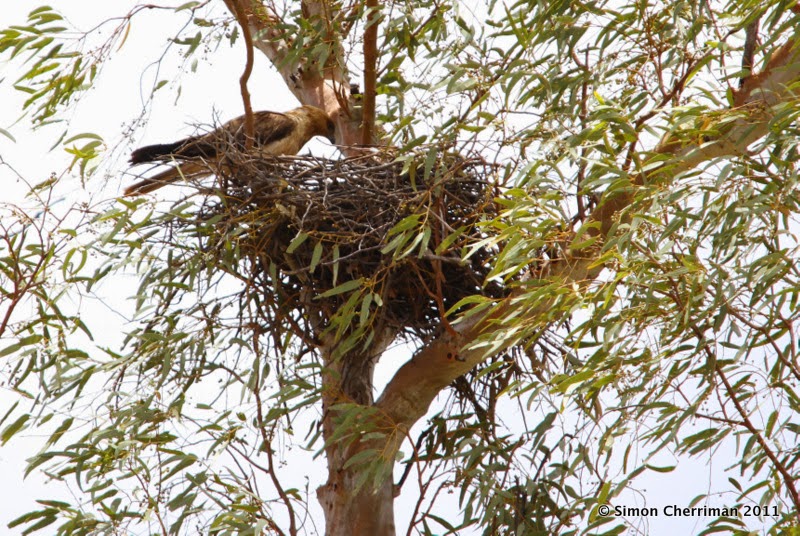 Three years ago, I photographed two half-grown chicks belonging to this same pair of kites, who in that year used an alternate nest in a neighbouring tree (see this post for more on that adenture). The below photo was taken at the end of October when the kites are about 2 weeks old. You can see a freshly plucked Galah at the edge of the nest in the background, a good meal for these developing raptors. 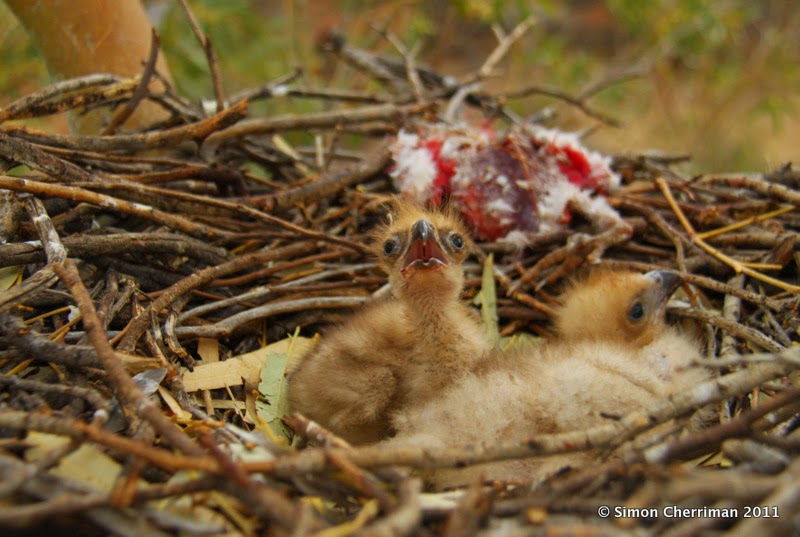 By late November kite chicks will be ready to fledge. Hopefully I will be able to return to these nests later this year and check up on their progress. Another example of the many creatures which call the desert regions of Australia's interior home.
Posted by Simon Cherriman No comments: 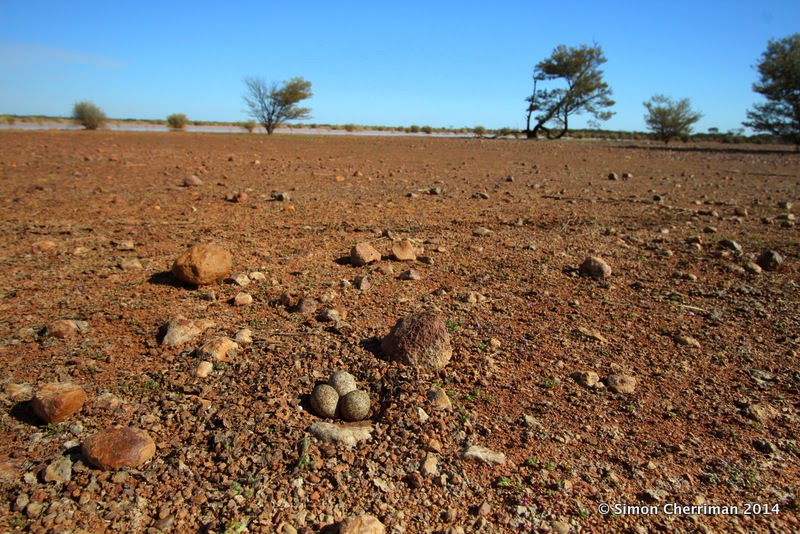 Today while conducting nest surveys as part of my Wedge-tailed Eagle research at Lorna Glen, I was fortunate to be with a fellow ornithologist Neil Hamilton when he spotted this very camouflaged nest. Can you spot the eggs? They look just like small rocks and have been laid on a patch of bare ground next to a small wetland. The owner is a pretty little species of waterbird - the Black-fronted Dotterel (Elseyornis melanops). The eggs are beautifully marked and although they should seem obvious out in the open, they actually blend in very well. 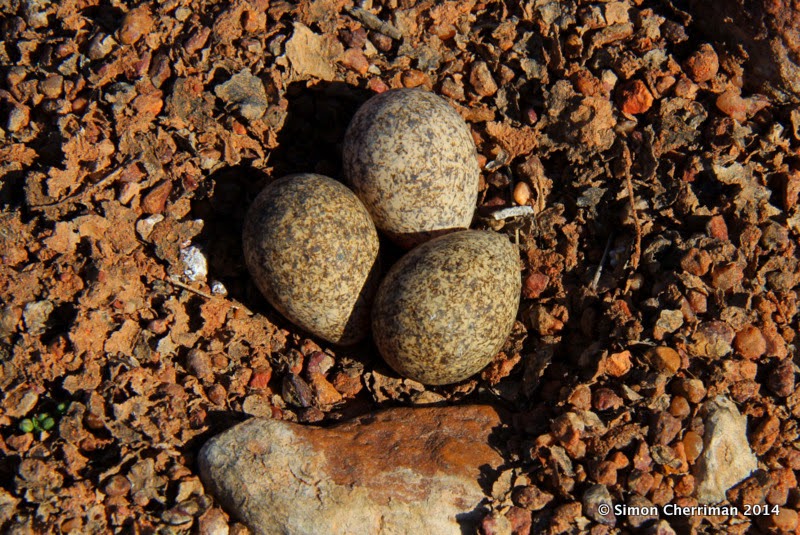 I am always amazed how waterbirds can turn up in the most remote deserts and breed when claypans are inundated. This rare event sets the surrounding ecosystem flourishing and gives birds like dotterels and other species the chance to reproduce quickly. We also found evidence of ducks and grebes breeding, and observed quite large flocks of Zebra Finches still nesting in the area. I am hoping the good conditions will prevail for the next few months as this will give the newly hatched eagle chick we found close by a strong chance of survival.