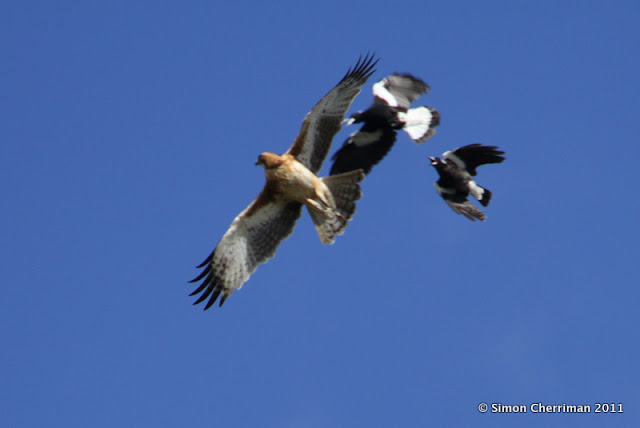 One of my earliest memories of seeing an eagle was at the edge of my dam at home. I was only young - about 10 - and I’d been catching frogs or fish or something at the water’s edge. It was Kambarang (late Spring) and the water level had already dropped quite a bit. Wood ducks were accumulating in numbers around the dam at this time of year as the broods of ducklings reached adult size.

The whooshing wingbeats of about twenty Wood Ducks clipping the treetops as they descended swiftly downward to the dam made me look up suddenly. In the commotion of their landing I hadn’t noticed the speck spearing in after them, but it did, and before I could realise what was happening, an eagle dropped like a bullet and killed one of the ducks outright as it landed. BANG!! The duck lay lifeless beneath the eagle’s firm grasp, and the rest of the flock dispersed into the surrounds like greased lightning. A sudden neck-jerk had the eagle’s eyes fixed firmly on me as I stared in amazement. I’d just seen my first kill.

After only thirty seconds or so, the eagle spooked and took off, leaving the duck behind and disappearing from view as quickly as it had arrived. As a small boy I wasn’t aware of which species this predator had been. It was only years later, with the beauty of hindsight, that I had ‘identified’ the picture frozen in my mind as a Little Eagle.

This species has a rather plain and confusing common name:
“I saw this bird of prey... pale underneath, smaller than a wedgie.”
“It could have been a Little Eagle?”
“Yes, the eagle was quite little. What are the names of some little eagles?”
“No, that IS its name - a Little Eagle!”
“Oh - that’s funny. I thought you meant little as in little, not little as in Little!”

I now regularly sight Little Eagles over Parkerville, though they are far less common in the general region as Wedgies or Accipiters (Goshawk/Sparrowhawks).

Today I was lucky to snap the above shot of one as it was frantically flapping away from the snapping beaks of aggressive magpies. The eagle alerted me to its presence by its yelping call, which had me jump up from my computer and rush outside with my camera and long lens.

Nature is always hunting, lurking, fleeing, calling, moving and working around us. I think sounds are the most important thing in guiding us to many exciting experiences. We just need to tune in and listen.
Posted by Simon Cherriman No comments: 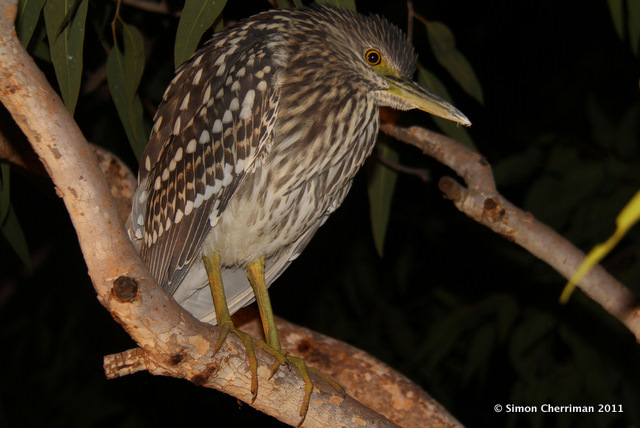 This fabulously marked, intriguing and often cryptic specimen of a bird - a Nankeen Night-heron (Nycticorax caledonicus) - was the last image etched into my mind after returning to Perth. I crept up the verandah post and streeeeetched on my belly across the corrugated iron roof to get as close as I could to this juvenile bird, who sat silently in a eucalypt, unfazed by the din of drunken laughter and live music below us. Minutes before, some party-goers had pointed him out to me, roosting in a low sapling near the campfire. He then flushed from this perch, and in about three strokes of his silent wings, missed the live band’s drummer by inches as he flapped up to the new perched. What a magic moment! One that summed up a magic time, with inspiring people, in a magic location. A privilege to be part of.

I’ve just spent 3 weeks exploring the gobsmacking landscapes of the vast El Questro Wilderness Park on the 2010 Australian Geographic Scientific Expedition. You’ve probably already guessed that it was a remarkable, once-in-a-lifetime experience, filled with too many stories to talk about here. The only thing I can say is look at the Photo Album which contains a small fraction of the photos I took while I was up there... then if you’re keen to see these things for real, keep your eyes on the Australian Geographic website for news of another trip in 2012.

Ok... just one more image to leave you with! You could guess it was going to be a Sea Eagle :-) 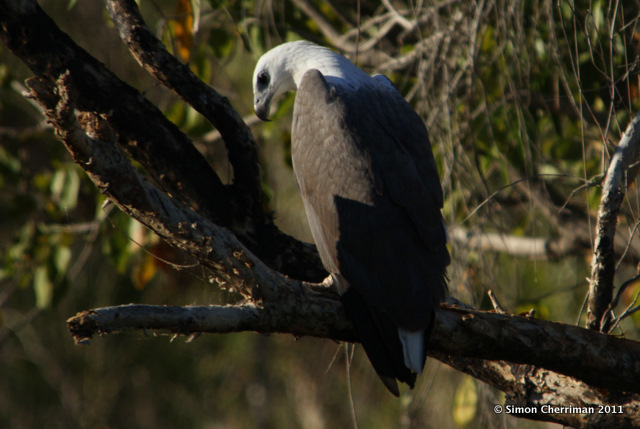