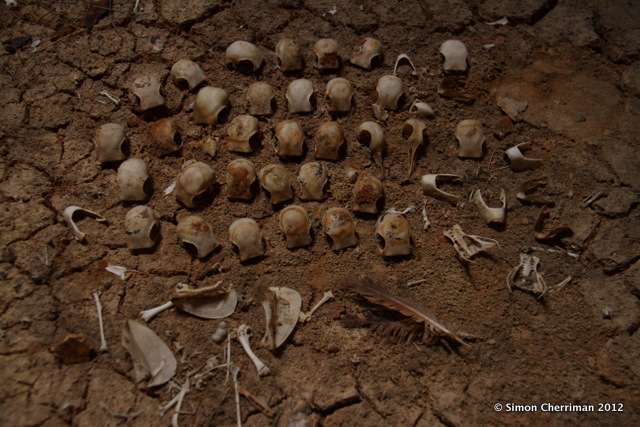 The above skeletal collection is something that I would usually be very excited about, having found bones beneath the nest of an Australian bird of prey. However, the 32 skulls pictured above do not represent birds killed in a natural situation... they were recovered from an outback death trap, in Western Australia’s Murchison region.

This death trap was the abandoned water tank pictured below.

I’d spent the first rays of daylight eating my breakfast and waiting for birds to come in to drink at an old trough on a farming property just south of Cue. The bent windmill nearby had stopped working, but the trough had filled with water from recent rains, something which had not escaped the attention of local birds. The previous few days I’d seen Australian Ringnecks (Barnadius zonarius), Bourke’s Parrots (Neopsephotes bourkii) and even Mulga Parrots (Psephotes varius) gathering at the precious water source in an otherwise barren landscape. They drank momentarily before fleeting off into the scrub. On this still morning, a lone Budgerigar had burst from its roost, narrowly escaping with its life after a male Collared Sparrowhawk (Accipiter cirrhocephalus) chanced a sudden attack.

I walked over to the trough, the water supply in which was now dwindling and covered in algae. Only a few insects floated down to the moisture. The surrounding silence was deafening.

The large, fiberglass tank near the windmill then caught my attention. Curious to see if any water remained inside, I walked over to an opening in the top and peered inside. As my eyes adjusted to the darkness, I could make out the shape of many small bones scattered over a layer of cracked, dusty mud on the floor of the tank. Grabbing a head-torch from my dashboard, I climbed up to the opening and lowered myself inside.

Closer inspection revealed the bones were all those of birds - skulls, lower jaws, sternums, wing bones. Five, eleven, sixteen, twenty-five... thirty-TWO!! I gathered the skulls together and arranged them in front of me. What a terrible shame, and a horrible way to die.

Most of the skulls belonged to galahs, with a couple of pigeons and a few parrots, probably of the species mentioned above. These individuals must have been attracted to a shallow layer of water that once remained inside the tank. Over decades the birds had learnt about this artificial watering point, and had come to drink one day... but the trough was dry. So they inquisitively sought out moisture inside the tank. Once inside, they would have had nowhere to land, and no easy way out. The opening in the top was too small. Flapping frantically, they eventually became bedraggled and were sucked under the water. Slowly submerging and drowning inside the plastic prison.

And unnecessary deaths like this could have been avoided...     with ONE LITTLE LID.

There is an old saying “Out of sight, out of mind.” When we make changes to the landscape, then forget about them, impacts resultant from these changes cease to exist in our thoughts. But they don’t cease to occur. Such things should be carefully considered when humans come and go, leaving these changes which can have profound affects on other beings. 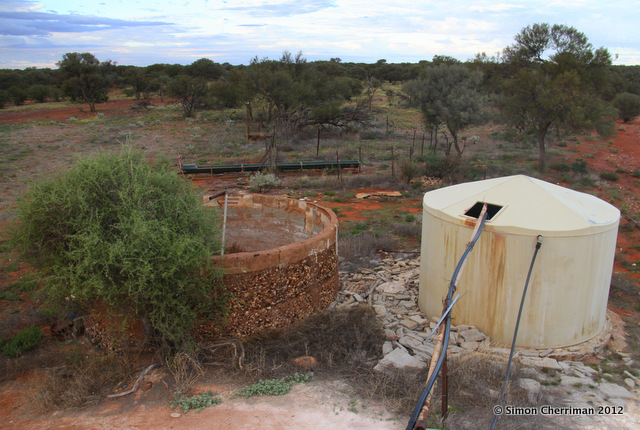 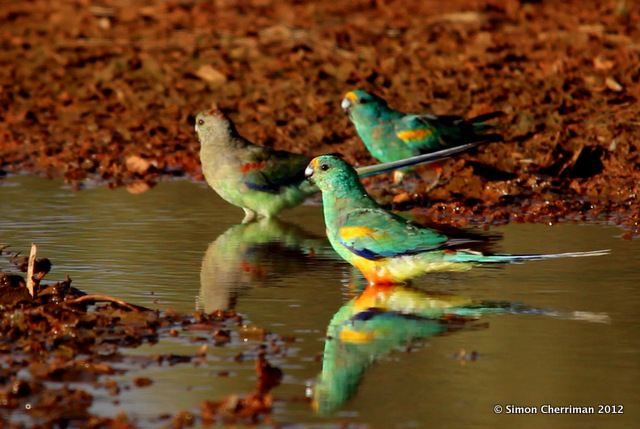 A family of Mulga Parrots (male at front right, female back left) drinking at an outback puddle.
Posted by Simon Cherriman No comments: 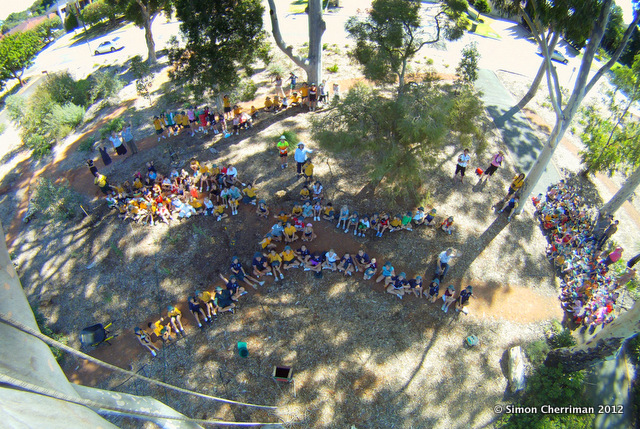 Looking down from the leafy canopy and seeing over 150 smiling faces beaming up at me today was one of the most wonderful moments of my short ‘education history’. This photo was taken from about 20 metres up in a Lemon-scented Gum at the front of the latest school to participate in the School Nest Box Program. Why was I up there? Read this Re-Cyc-Ology website post to find out... 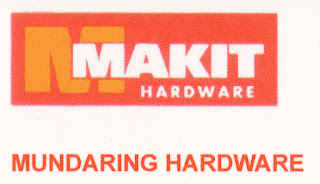 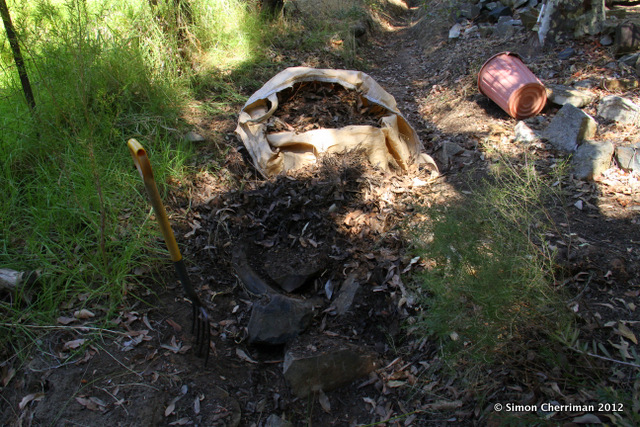 If you think this looks like nothing more than a pile of wet leaves, then you’re right! And what could be interesting about a this? Well, the secret lies beneath...

Today I was helping my mum in the garden by shovelling piles of leaves out from the drain that runs down the side of our property. These, along with much soil and sediment, had accumulated after recent ‘flash floods’ in the Perth Hills. Leaves, rocks and sticks are actually important to remain in drains and creek beds to help control the flow of water and minimise erosion, but when a massive build up occurs, this can do more damage by acting like a dam, causing excess flooding once winter creeks begin to flow. Land management is always about finding the right balance!

After moving a few wheel-barrow loads of leaves out of the drain, I was scraping the last pile together from the now very moist layer at the bottom of the ditch. Even throughout the baking days of summer, which have sometimes exceeded 40˚C, there was moisture here. Then something moved. I looked carefully but struggled to spot anything. I ran my hand across the ground again and a tiny creature hopped. A frog! It was so well camouflaged amongst the leaf-litter and gravel, but its movement had given it away. 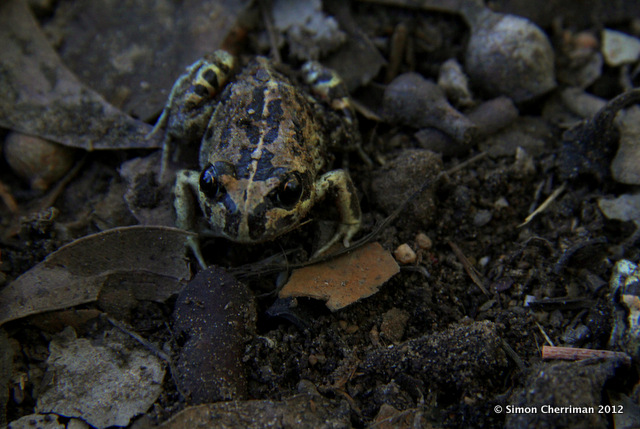 As I picked it up I realised it was a tiny, newly-metamorphosed Banjo Frog (Limnodynastes dorsalis). At the end of Kambarang (late Spring) 2011, this animal would have emerged from its tadpole state in the dwindling pools of the creek. Before all water dried up, it, along with many other froglets and adult frogs, sought out a cool, damp place in which to spend the summer. Sometimes in wet soil nearly a foot below the surface. Occasional damp nights would bring the creatures out to forage for insects, but they would quickly retreat to their damp hidey-holes before the heat of day.

I searched the leaf-litter in front of me and found two other tiny frogs, probably from the same brood as the first one. Removed from their camouflaged home, you can see their beautiful markings. After a quick photo and a ‘show-and-tell’ to my family, I found a new pile of damp leaves on the creek bank and buried them under it. Here they will stay, patiently waiting for the soothing rains of Djeran (Autumn) to wet the landscape. Adults of this species will look forward to the soaking Makaru (winter) rains, when they spread throughout the livened waterways to find suitable breeding sites. From here they emit their loud ‘Booonk’ calls, like the strum of a Banjo, which gives them their name. For more information about Banjo Frogs, read my other news story here, or visit the Frogs of Australia website at  http://frogs.org.au/ 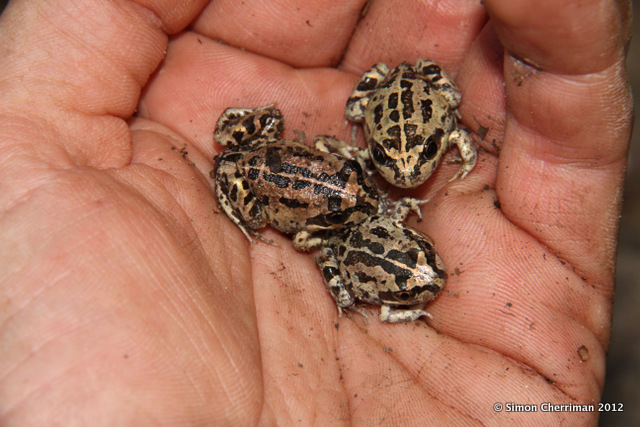 Nest Boxes: Off the Ground! 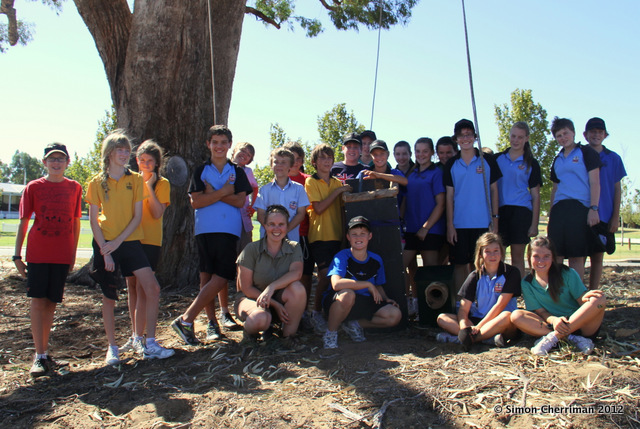 The Schools Nest Box Program "Home Among the Gum Trees" has finally begun, with our visit to the first school today.

But to start with, we need to say a BIG THANKYOU to the fabulous, generous staff at Mundaring Hardware. Last week we were thrilled to receive a phone-call from Carolyn and Rusty regarding our sponsorship letter to say the shop was willing to donate various material to help us build nest boxes with school children. They happily gave us hammers, screwdrivers, screws, paint and several other bits and pieces to help us run the first workshop, and are insistent on providing ongoing support to our cause. Our sincere thanks to these kind-hearted people.

Today we had the pleasure of working with 24 Year 8 Students from Tranby College, Baldivis, who were all enthusiastic and had fun with woodworking. We started the session with some indoor talks, giving background information about hollow homes in Australian Gum Trees (by me), and the importance of reducing our waste, recycling, and information on how the students could recycle materials in their area (by Gill). Then we jumped outside and began the construction!

A sign overhead told me this activity was going to be a success when I noticed a pair of my totem Wedge-tailed Eagles, specks in the sky soaring high above in the distance. Each box was made in kit form, so the students’ task was (with some helpful hints) to nail a wire ladder inside the box, assemble the front, back, base and sides, fix the lid with a hinge, then give the whole box a good lick of fresh paint! All the groups showed great teamwork skills and the six boxes were pretty much finished by lunchtime, with some extra keen students choosing to complete their nest box after the bell, before getting their lunch :-)

In our afternoon session, I gave a tree climbing demonstration while setting up ropes in a massive Tuart tree, situated at the edge of the oval, which (with the students’ help) we had selected to house one of the large Black Cockatoo boxes. This took much longer than expected: the children learnt some of the difficulties of climbing when fishing lines get tangled up in the canopy! Gill did a fantastic job of explaining all the intricacies of tree climbing while I attempted to untangle my lines - without success - so we returned to the centre of the school and I installed a smaller box instead (see picture below). This one proved much more straightforward, and afterward the students had to rush off to catch buses home (it was now 3:15pm). 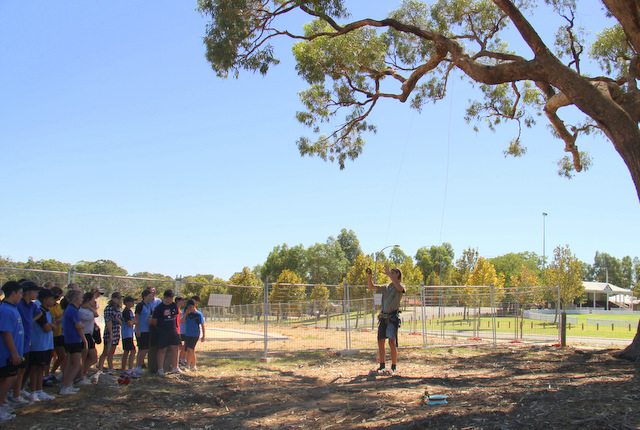 Gill and I had a short break then ‘stayed back after school’ to continue hanging the remaining smaller parrot- and possum-sized boxes, choosing situations close to the school buildings where they could be kept under close watch. I then returned to the big Tuart, which had been beckoning me from the top of the hill overlooking the school. From high in the tree I set up a pulley system, and with Gill’s helping heaves we hoisted the box into position. You can see it in the picture below, about half way up on the right side of the tree. 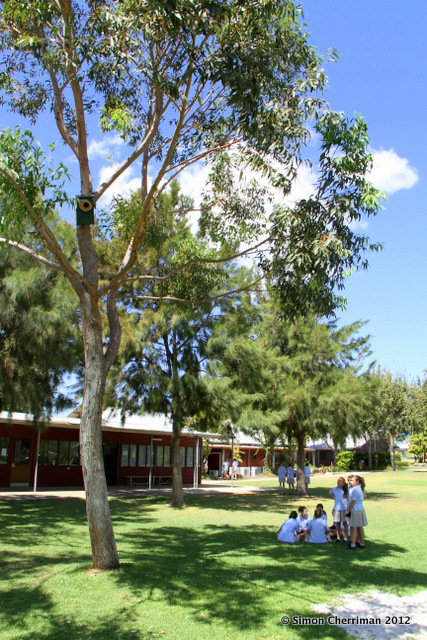 As we packed our gear into the car we heard the grating ‘Karaak’ call of some Red-tailed Black Cockatoos, and several birds flew low over the tuart tree containing the new nest box. Was this a welcoming visit to a future breeding site? We sure hoped so.

In the meantime it would be up to the Tranby College Year 8’s to keep an eye on their new wildlife homes - and write down details of any promising tenants in the Baldivis area.

Our thanks to Rachael Bullock and Jenny Florence from Tranby College for organising the day. If you like the sound of this and would be keen to have us visit your school, please email me. 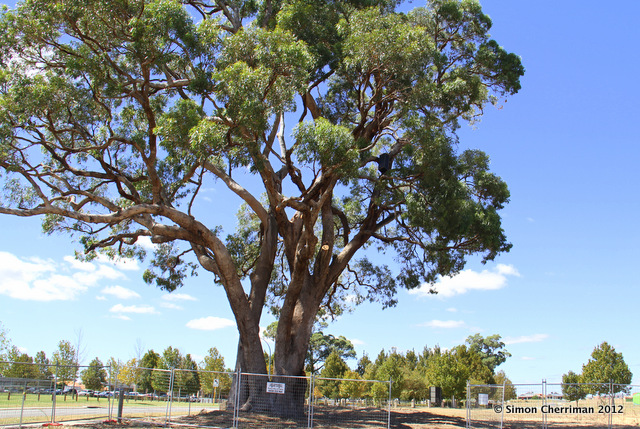