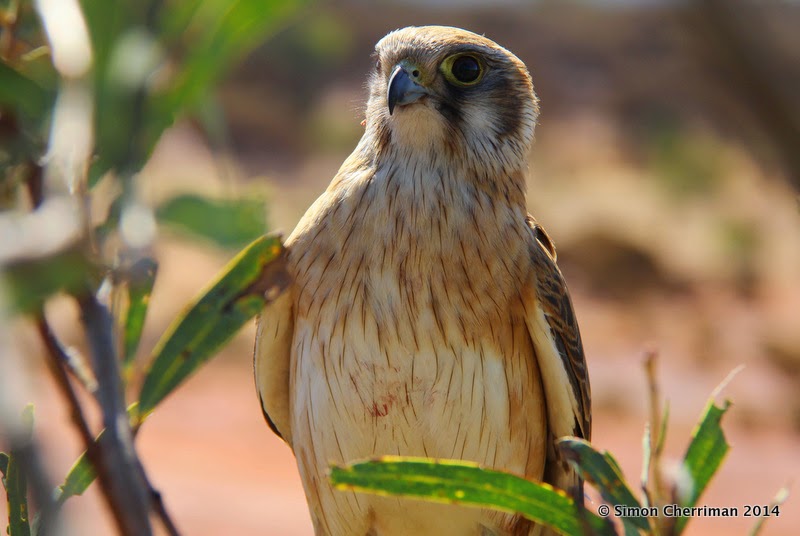 Isn't he stunning? Here you can see an up-close view of one of our most fabulous and well-known species of raptor, the Brown Falcon (Falco berigora). Did you know that its species name 'berigora' comes from an Aboriginal word for this bird, originating in NSW? Ecologically, 'brownies' are probably equivalent to the multi-talented Common Buzzard of Europe and Asia - they will hover like a kestrel and swoop like a goshawk, or even hunt on the ground to run after and catch frogs, lizards and snakes. This 'jack-of-all-trades' characteristic helps explain their wide distribution and success in many different habitats. 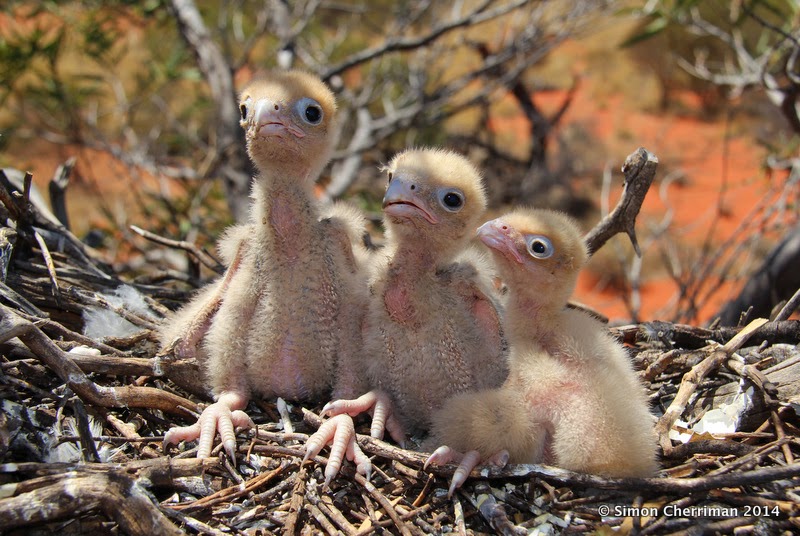 Brown Falcon chicks! Like all the falcons, browns do not build a nest of their own. This species uses an existing one built by another raptor, corvid, magpie or babbler, as with 3 of the 5 other Australian falcons (Peregrine Falcons and Australian Kestrels will also nest on cliff ledges). The clutch of 3 in this old Wedge-tailed Eagle 's nest atop a tall Gidgee tree has now hatched and the chicks are into their first week, with eyes open and alert. It will be a few weeks until fledging. Here is another brood of three which are much more advanced - the youngest is a bit squashed under his sibling!! (can you spot him!?). 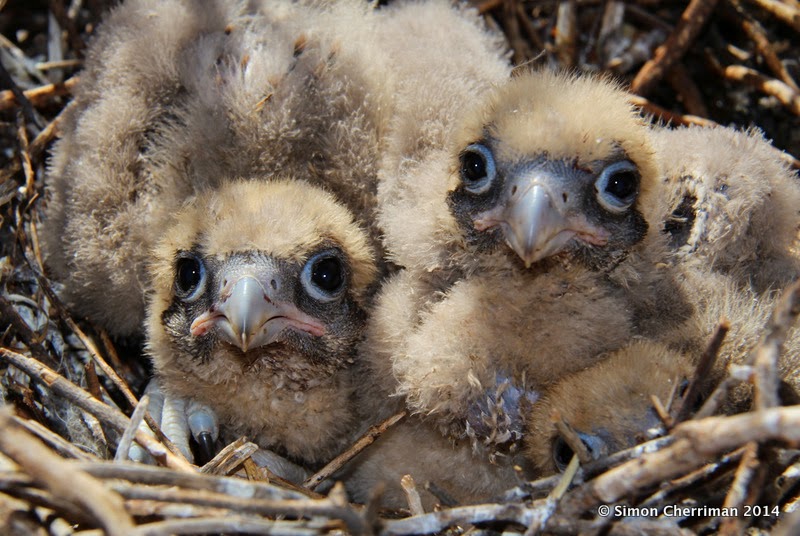 These gorgeous young predators are about 3 weeks old, and huddle together in their nest while they wait for their parents to deliver prey. Currently there are many small songbirds in the Mulga shrubland surrounding this nest - Zebra Finches, woodswallows and honeyeaters - which provide a good source of prey for these falcons.

As part of a study of birds in the arid inland of Western Australia, we've been recording the breeding of all species of birds of prey. Brown Falcons are one of the most common raptors and we have currently recorded 6 nest sites. Nestlings are being fitted with metal rings/bands on their legs - these are a fixed size, are applied when the legs are big enough to hold the ring (the rings do not stretch/grow), and most importantly are harmless to the bird. The older brood pictured above was lowered down in a soft bag where the chicks are weighed, measured and ringed.

Ringing nestlings allows us to identify individuals and gain more information on their movements and survival. Such information is important for conservation - it provides land managers with the most up-to-date and accurate knowledge required to help the environment support maximum biodiversity! This research is conducted under the Australian Bird and Bat Banding Scheme and has been approved by an Animal Ethics Committee to ensure it follows the Animal Welfare Act.

A bird in the hand is definitely worth two in the bush! But it also allows us to view detail not otherwise visible in the field. One of the most noticeable features of the Brown Falcon chicks we handled was their almost blue legs! Here you can see the detail of the scaly toes, which currently have soft and delicate skin, but will soon develop the tough armour that helps the species handle reptilian prey such as snakes. 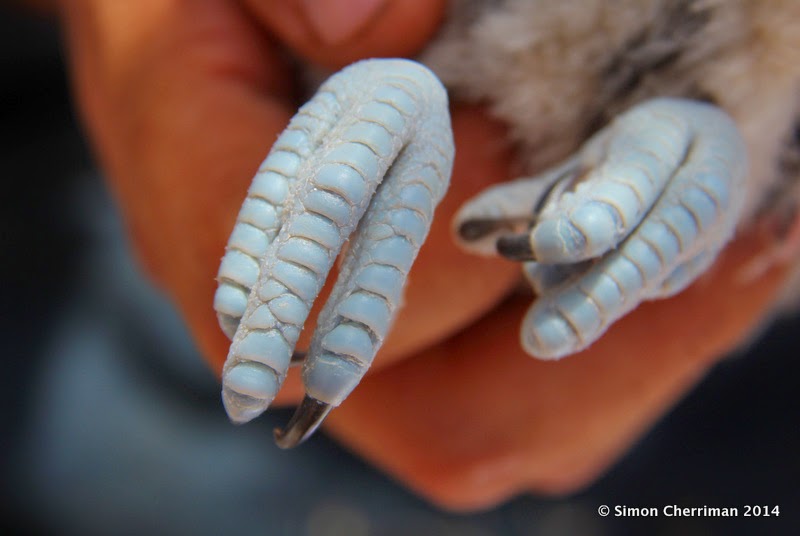 The most amazing part of these falcon experiences was the nature of the adult male falcon who is pictured at the top of this post. As I balanced myself with small branches in the dense canopy of the Gidgee tree in which his nest was situated, and took photos of his very cute offspring after I'd placed them back, he suddenly alighted on the leafy outer foliage, just over a metre in front of me. He was in no way aggressive, but calmly clung to the canopy, lifting his wings to balance himself against each gentle gust of wind. I photographed him for about 10 minutes, and all the while he gazed across at me with those big, brown eyes that I knew could detect the finest detail on my face. 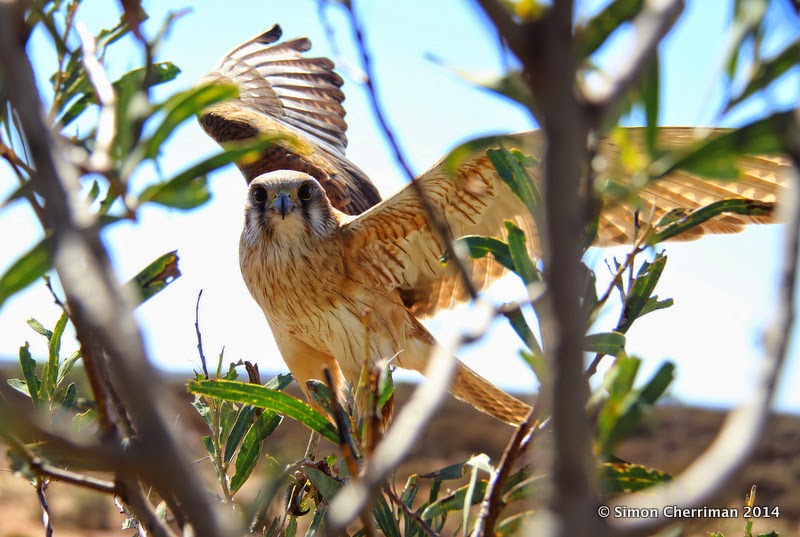 The silence was suddenly shattered by the female falcon, who arrived overhead with a loud call, warning me that she did not respect my proximity to her chicks. You can see a picture of her below - she is a much darker bird than the male. I knew then it was time to get down, and leave this family in peace. It was exciting to have ringed them, and think about where in arid Australia they might turn up down the track.

As with all my photos, these ones in this blog aim to offer 'insight' into a common yet beautiful bird's life, and enhance appreciation of just one of our many wonderful animals! I hope you've enjoyed them :) 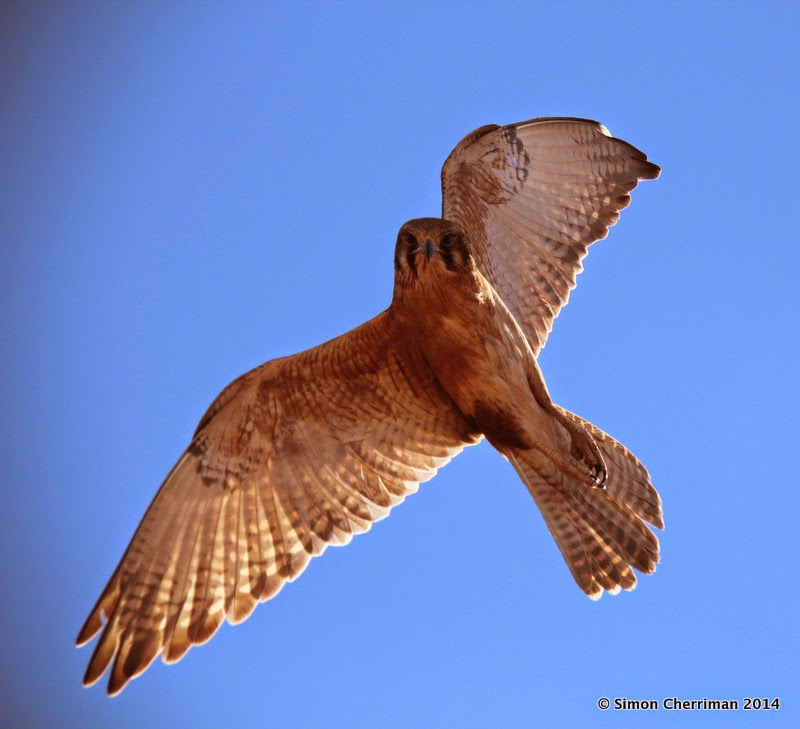