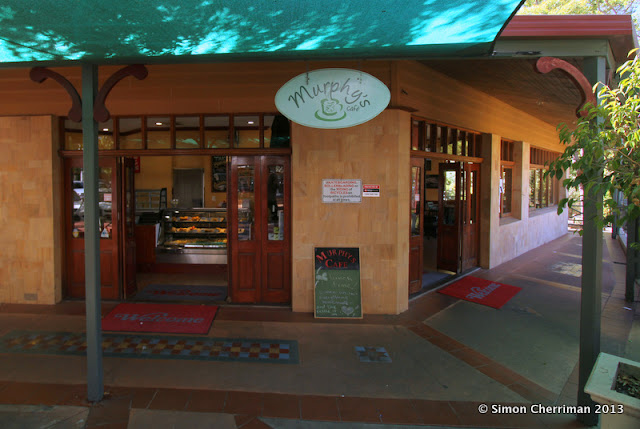 The Wild Australia photography exhibition closed today with Judy and I removing our prints from the display at Little Creatures. On my way home I called into Murphy's Cafe in Mundaring for an iced coffee, began chatting to the owner Sarah, and was totally stoked when she offered the wall space in her cafe for us to display our prints!

Gill and I now have about 14 of our various sized canvas, block-mounted enlargements on display at Murphy's. Why not go and have a fabulous coffee, snack, or more substantial meal and enjoy some wildlife art? Here's some images of the fabulous food on the menu to help you make that decision :-) 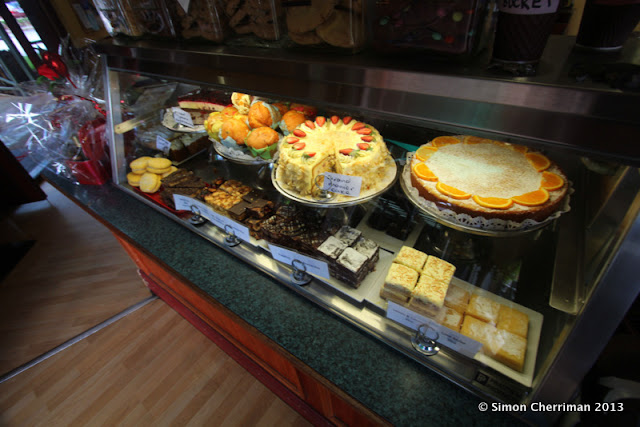 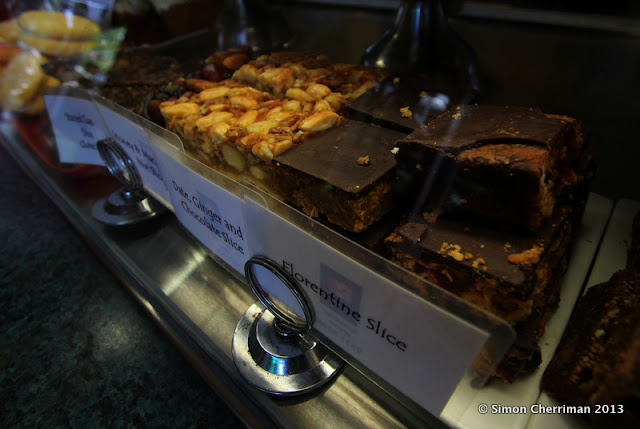 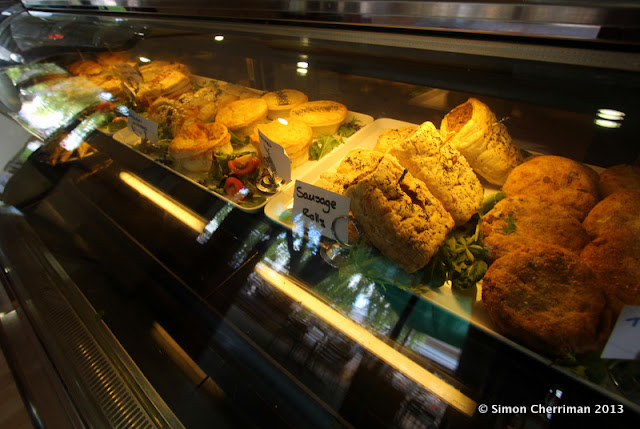 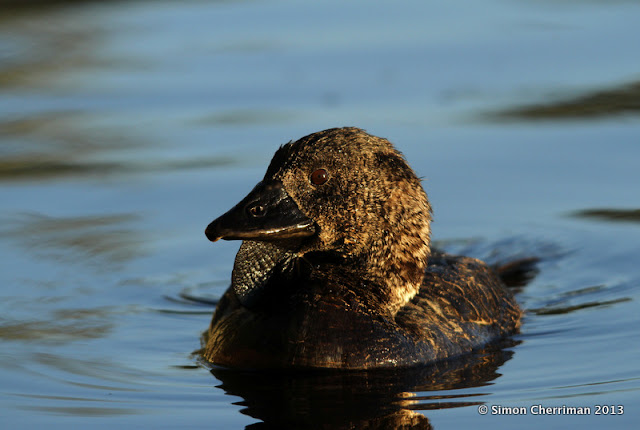 No, that's not a leach stuck to its throat! The piece of skin hanging from under this bird's bill is actually perfectly natural.

The Musk Duck (Biziura lobata) or 'Kodara' (pronounced 'Caw-dar-ah') in the Nyoongar language is a very unusual waterbird, and today I was privileged get a few photographs of the species at a local hills wetland. Kodara are diving ducks, lying very low in the water as they swim (almost like a cormorant) and frequently dipping below the surface to catch freshwater crayfish and other water-dwelling invertebrates. They have very stiff tail feathers which act like a motor to propel them along underwater, and when frightened they will always dive rather than fly away. 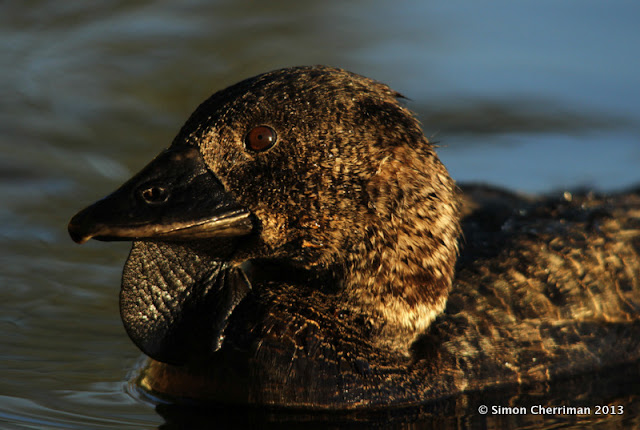 Pictured above is a male, which is easy to identify from the conspicuous lobe of skin under its chin. This bizarre feature is an important part of the male's courtship display, which is one of the most unique spectacles in the Australian bird world. In an effort to attract a female, the male bends his neck right back, inflates his chin lobe with air, sticks his tail feathers upward, and while floating in open water, gives a series of loud 'plonk' calls and splashes water over himself with his feet. The call travels great distances and can be heard from several kilometres away across the surface of the water. Males display usually on freshwater wetlands from about June right through to about February, with some unsuccessful individuals persistently carrying on with courtship well into the summer nights.

The female Musk Duck is attracted by this bizarre display, and after mating she retreats to find some cover to build her nest. It is one of the most well-concealed bird nests I have experienced finding, and is usually hidden deep in the reed beds (although I have found one very obvious one in a sparse paperbark sapling in deep water). The female duck builds her nest by first finding a suitable spot, then reaching up and bending the stalks of reeds and other water plants underneath her, while flattening a platform with her body. In this way the nest achieves a domed structure with a sparse 'roof' covering it. She lays the 2-3 eggs in the nest, then like all other ducks, pulls soft down feathers from her body and covers the eggs to keep them warm. Musk Ducks lay HUGE eggs in proportion to their body size (they are about twice the size of a chook's!) so this probably explains why they lay so few compared to most other ducks.

After photographing this male I decided to go exploring in the reeds nearby, and as luck would have it I managed to find a Musk Duck nest! It was well concealed in the reeds and contained 2 eggs - here's what it looks like: 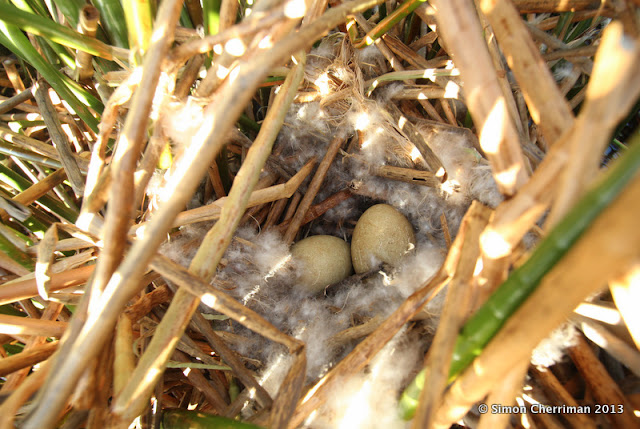 When the eggs hatch the ducklings stay with their mother for many months, learning how to feed by watching her closely. Most often only one duckling will survive - there are many foes in the wetland environment from Australian Ravens and birds of prey above to Long-necked Turtles waiting to pull them under from below. It is common to see a female swimming around with her half-grown offspring (see below) toward the end of Birak, the Nyoongar word for early summer (December and January).

Next time you visit a freshwater wetland, see if you can spot a duck swimming very low in the water. This is our very own and unique Kodara! 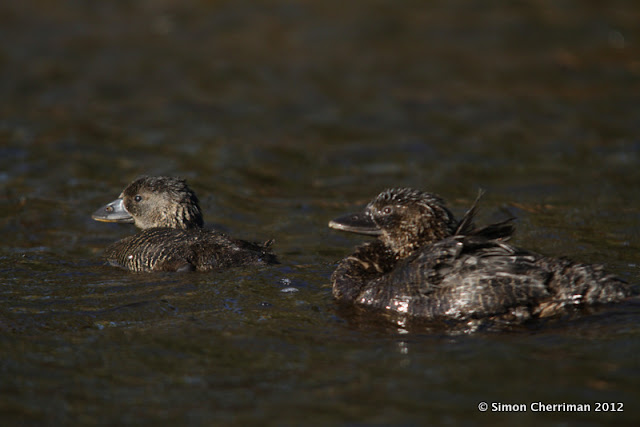 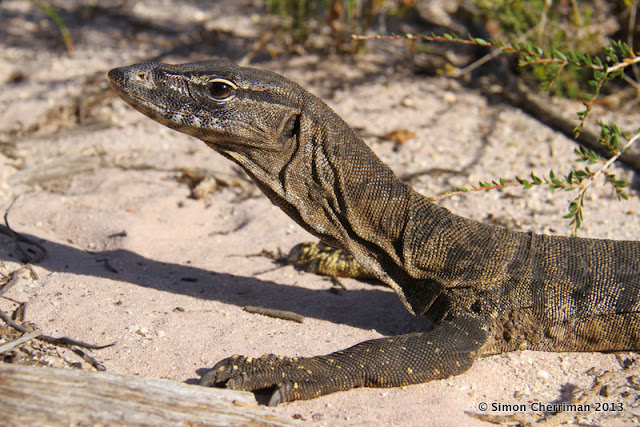 I've just got back from a few wonderful days exploring some wilderness in Western Australia's south-west, namely the Stirling Ranges, Porongurups and coastline near Albany. There were so many wonderful wildlife events that I experienced but one truly stood out above the rest.

The Rosenberg's Goanna (Varanus rosenbergi) is a formidable predator which is common among open woodlands and heathlands of the south-west. I always find it incredibly exciting to see a monitor lizard but never has one allowed me into it's personal space like this one did.

Check out the video and see if it puts a tingle down your spine too!

A Hen in the Swamp! 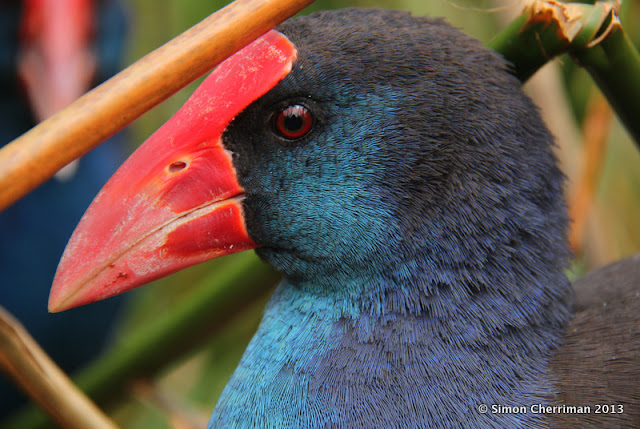 Have you ever been RIGHT up close to a nesting Purple Swamphen? Well, this is an experience I was privileged to have had today among the reed-beds of a freshwater swamp.

It had been a hot day but the golden afternoon sunlight cast a mystic glow over the lake, and seeing as the temperature had dropped I was drawn out of the shady hammock and into my canoe to go exploring. I hadn't paddled very far when I saw a shape hidden in the reeds, about 10 metres in from the open water, and caught a glimpse of red. As I got closer I could make out the form of a Purple Swamphen (Porphyrio porphyrio) sitting on a nest, its red frontal shield the only part of its body that stood out. I decided to leave my boat at the edge of the reed bed and, sinking in the water up to my belly-button, I waded slowly closer, bending the tall stalks of twig-rush (Baumea articulata) out of my way with each step forward.

This bird, known as Kwilom (pronounced 'quill-awm') in the Nyoongar language, is one of Australia's most beautiful waterbirds. There are actually about 13 varieties of this swamphen found throughout the world, so it is clearly a very successful species! Our subspecies here in the south-west of WA (race bellus) is extra special, having paler blue markings on its breast, neck and face, making the colour display in the afternoon sunlight even more vivid.

I expected this female would flush from her nest and retreat into the nearby reeds (as I've experienced before), but she was clearly habituated to people when she carried on bending Baumea stalks down and shredding them up, adding to her nest and displaying totally natural behaviour as I watched from only a metre away! Two other members of the family group watched closely, guarding the immediate surrounds of their nest and keeping a close eye on me... 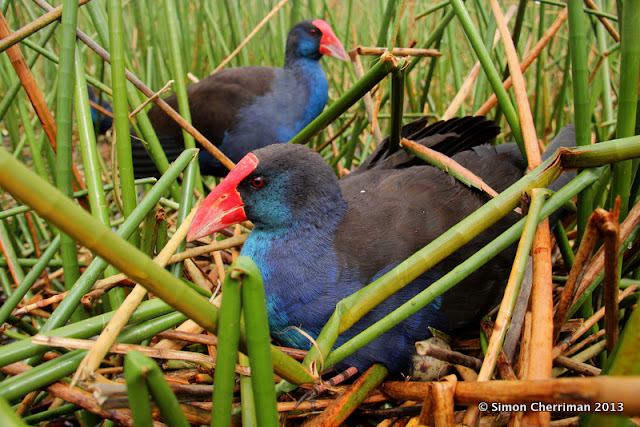 I started filming, seeing as it was such a good opportunity to capture the bird's behaviour at close range. Then something amazing happened. The swamphen was clearly very comfortable with me as she re-adjusted herself on the nest and gave me a sneak look at its contents: 5 beautifully marked eggs! As you can see below, they were grouped tightly together and tucked under the female's belly to keep warm. 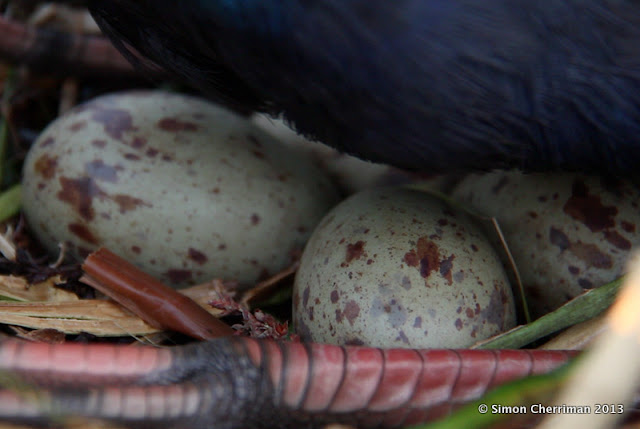 I am looking forward to keeping tabs on this nest over the coming weeks, and hopefully seeing the swamphen chicks when they first emerge. If you are too, keep an eye on this space!
Posted by Simon Cherriman No comments: