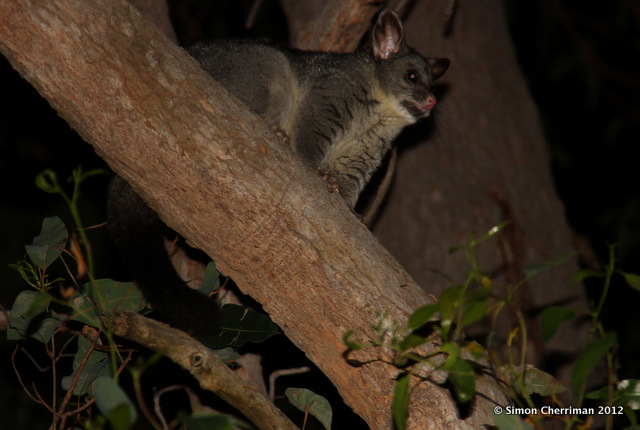 Nearly two months ago I installed a nest box (made from 100% recycled material) in a large Marri tree at the front of our place in Mt. Helena. This was not long after we sighted the fella in the photo above in our backyard. I’ve checked it about twice to see if we’ve had anything move in - but no luck.

A few nights ago I saw two possums foraging in the canopy of the Marri trees in our backyard - so checked all my boxes (I have 4!) immediately, but still didn’t find any residents.

This morning I was raking leaves out the front when I noticed tufts of possum fur on the floor. As I looked harder, I could see little bits floating down from a branch high up, around which I then noticed were wads and wads of more fur. Maybe the possum’s had had a fight? Someone had lost lots of fur! As this branch was in the ‘nest box tree’, I borrowed my neighbours’ ladder (thanks to my wonderful friendly neighbours) and scrambled up for a look. Sure enough, laying curled up asleep at the bottom of the nest box was a beautiful Common Brushtail Possum (Trichosurus vulpecula). Our first resident! 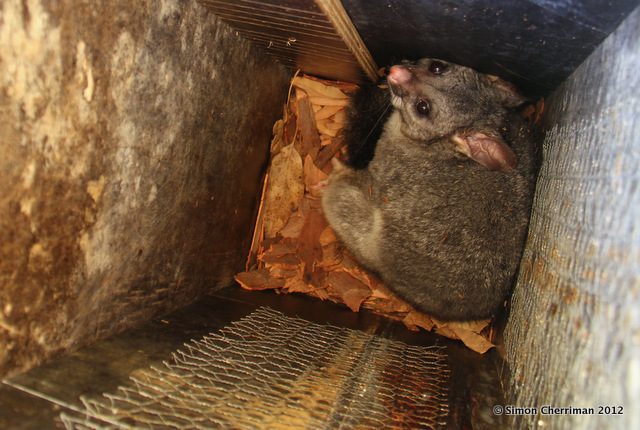 These possums are often known for living in people’s roofs, which unfortunately can lead to them being trapped and moved. Possums are highly sensitive animals and translocations can very often cause the possums to die. This is usually because the area to which they are moved has other possums already living there - so the newcomers get driven out... to their death.

A great solution is to install a Nest Box in your garden - all you need is a reasonably tall tree. Possums may not move in straight away, but at least they can get used to the box (especially if you ‘bait’ it with some fresh apple or banana!), and if you wire off your eaves a bit at a time, these arboreal animals will be happy to move house. It’s best to do some detective work first: check along your roof and try to locate the exact spot where the possum comes in and out of your roof cavity - this spot should have traces of fur caught on the bricks or wood. When you locate the spot, you can start wiring off the rest of the gaps under the roof, and leave the ‘possum hole’ until last. After you’ve installed a nest box, make sure the possum has found it before closing up the last hole. You might even like to sit quietly one evening and watch the possum emerge.

This is exactly how I spent the evening tonight. Eager to ‘meet’ my new friend, I crept outside and sat a little way back from the nest box tree, equipped with a torch and my camera. After only a couple of minutes (right on dusk), I heard scratching coming from inside the box, and was excited to see this very cute expert climber emerge. (Please note that the 'blood' on the tree looks a bit suspicious but it's just sap from the tree!). So many times nature’s ‘problems’ can be solved with a balanced solution that benefits both humans and wildlife. 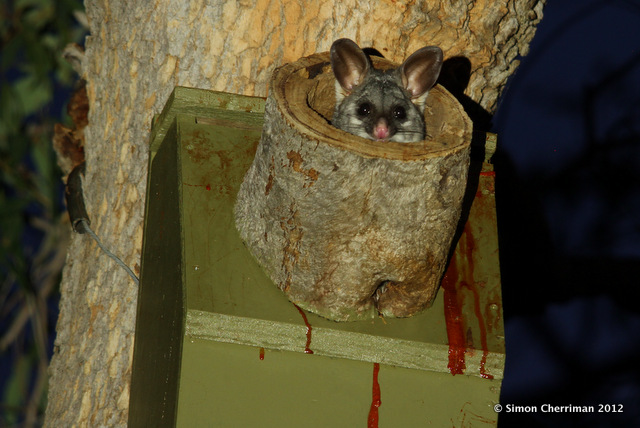 A Sound from the Ground 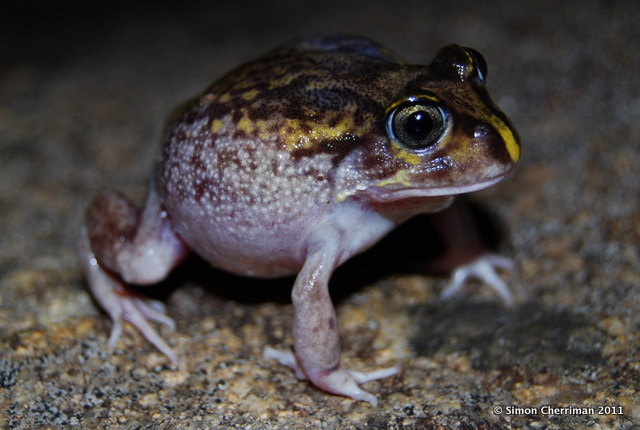 In the Noongar Aboriginal calendar there are six seasons, and this depiction much more accurately (compared to the European version) represents the changes we see in our environment throughout the course of a year in the south-west of Western Australia. With the arrival of April, we have just entered Djeran, the season of cooler change.

Nothing detects the change in season better than local wildlife who are often waiting for a cue to focus on a particular food, migrate, or commence breeding. The latter applies to a group of animals that you can hear right now if you listen closely around  dry creek beds and swamp edges in the Perth hills.

One example of this group is pictured above. This incredible creature is a burrowing frog - specifically, a Moaning Frog (Heleioporus eyrei). It is one of several species in the south-west of Western Australia that spends much of its life under ground. Moaning Frogs excavate their way into soft soil using their back legs, digging down deep until they find enough moisture to keep them hydrated. They stay here, hiding away from the hot sun until they are lured out by warm, moist nights to forage.

Coinciding with the arrival of Djeran, male Moaning Frogs begin calling to attract mates. At dusk and into the night, their mournful moan is emitted from a shallow burrow, the entrance of which helps resonate the sound to the outside world. If you look carefully in the muddy banks of creeks and dams, you can find the entrance to the burrow.

You may think it unusual for a frog to commence breeding before there is any water around - well, this is for a reason. After mating, the female frog lays her eggs in a foam nest that is hidden inside an underground burrow. Here the tadpoles metamorphose, just in time for the rains of Makuru (early winter) , which wash them into larger, more permanent water bodies. They then spend the next few months growing and developing, before they turn into Baby Burrowers.


Several other species of burrowing frog can also be found in the Perth region. Pictured above is a rarer species, the Hooting Frog (Heleioporus barycragus), which prefers heavier soils in the Darling Range. As its name suggests, the call of this frog is a bit what you imagine an owl to sound like (although just to confuse things, it doesn’t sound like any of our Australian owl species!). If you live east of the Darling Scarp you may be lucky enough to hear the distinctive calls of Western Spotted Frogs (Heleioporus albopunctatus). The distinctive spots (from which its species name is derived: albo = white, punctatus = spotted) and smooth brown to purplish colour make this a beautifully marked animal. Their call is a higher pitched, quicker ‘whoop’ sound, and can often be heard from ditches at the side of country roads in the Wheatbelt region.

Why not spend an Autumn evening listening out for burrowing frog calls? You may even see one of these magic creatures!
Posted by Simon Cherriman 2 comments: 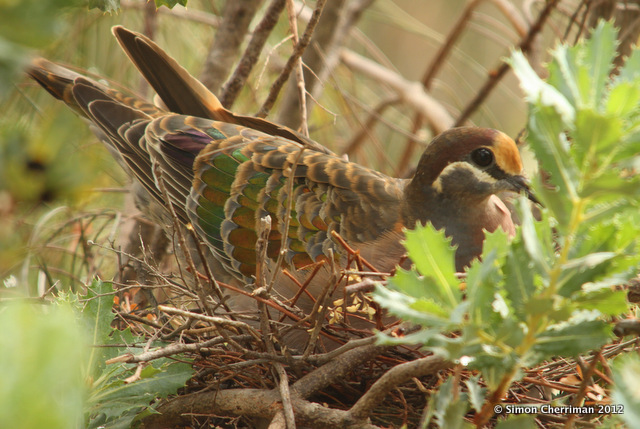 The Common Bronzewing (Phaps chalcoptera) can breed any month. Earlier this year, a pair built a nest and reared two beautiful young at my parents’ place in Parkerville. And now ‘our’ Mt Helena pair has decided that April is the month for them!

A few weeks ago, we observed both male and female pigeons busily gathering sticks and flying to a protected spot in the parrot bush thicket at the front of our yard. A flimsy nest started forming... but suddenly they gave up and ceased to build any more, or lay eggs. Recently we had a few days of rain, and this seemed to trigger the birds back into action. Nest-building behaviour was continuous over the weekend, and today I observed the male sitting while his mate was off foraging in the backyard. He sat patiently all day, probably incubating one egg the female laid the previous night, nestled cosily into the stick platform that sat among the prickly, holly-like branchlets of the Dryandra shrub.

Later this evening I checked the nest, and noticed the female had now taken on the ‘night shift’. In the cold evening air she sat much lower down than the male had, flattened onto the nest with her head tucked neatly behind some spiny leaves, concerned only with keeping her precious eggs warm.

Bronzewing camouflage is amazing - they no doubt rely on their patterned plumage to keep themselves hidden while sitting on their exposed nests. The birds are also aware of their colouring when out foraging and this has some influence on their behaviour. For example, when a magpie is startled by a threat like a dog or fox, it will call out in alarm and fly up to the safety of a tree branch. A Bronzewing on the other hand, knowing its feathers are coloured to match the dry leaves and bushes on the ground where it feeds, will remain perfectly still and wait until danger has passed. This makes them particularly vulnerable to being hit by cars: when active on roads, the birds freeze if an oncoming vehicle approaches, thinking they are camouflaged and can stay hidden until danger moves on. They don’t realise they are on a bitumen road and actually very obvious to all - instinct is very powerful.

Having seen the bird, an ignorant driver could think it will fly off, just as any other bird might, and not slow down giving it time to get away. The Bronzewing, waiting until the very last minute, gets killed on impact before it can move. Minimising our impacts to wildlife can sometimes take a bit of knowledge about wildlife, awareness of their behaviour and careful thought. 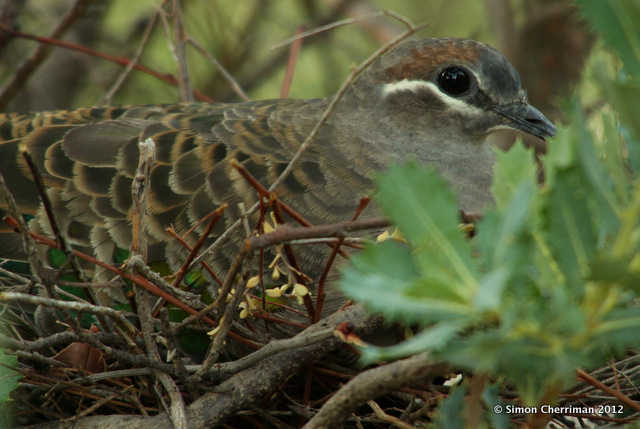