After the Fire - Community Therapy 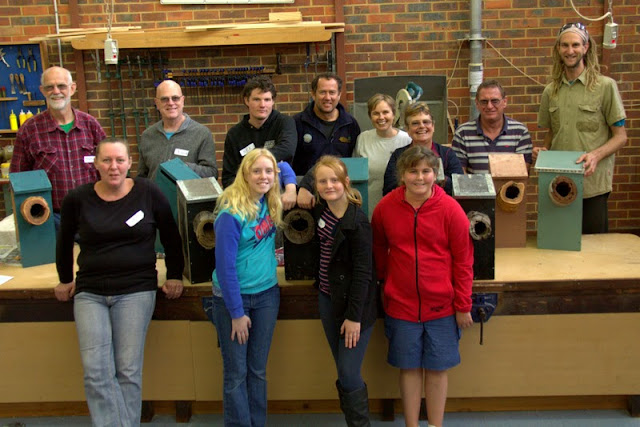 Today it was a thrill and a privilege to help run a nest box building workshop with fire-affected residents from the 2014 Parkerville / Stoneville / Mt Helena area. We had the wonderful hospitality of Eastern Hills Senior High School, with Design and Technology teacher David Annear donating his Sunday to facilitate use of the school's woodwork workshop. Home Economic students also generously gave their time to provide yummy morning tea and lunch for a merry bunch of people. We constructed 9 boxes altogether, one for each resident to take home and install in their backyards. I was so pleased at the end of the workshop when I heard someone say how therapeutic they found this activity, and how they didn't realise how much enjoyment it would provide. Happy days!

My enormous thanks go to Debbie Screen and the Shire of Mundaring for organising this initiative and engaging us to have the opportunity to provide a fun and educational day for the local community. The nest box component of Mundaring Shire's post fire recovery initiative was made possible by a grant from Westpac Bank. Also, Delta Corporation supplied the recycled form ply timber, and Pete and his fantastic team at Mundaring Hardware pre-cut it to size for us prior to the workshop.

There is a second workshop in 2 week's time, so if you are interested in enrolling to attend please see below for contact information. 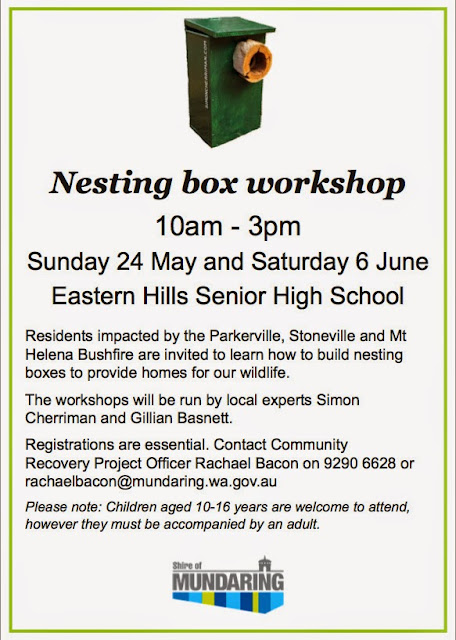 After the Fire - Bush Recovery 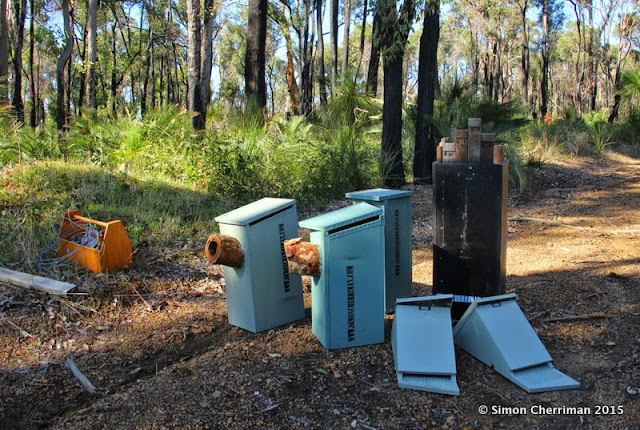 As part of Mundaring Shire's post fire recovery project, which aims to assist the local community affected by the 2014 Parkerville / Stoneville / Mt Helena bushfire, I have been engaged to construct a number of nest boxes for local bush reserves burned in the blaze. This was in response to residents' concerns for the impact of the wildfire on native animals. Today, with the fantastic assistance of my friend Emily, I began installing the first batch of nest boxes in Milligan and Sunninghill Reseves, just near Riley Road. The first thing that became apparent was how the incredibly resilient native plants have regenerated, flourishing from the ashes and filling the scene with fresh green growth. Less than 18 months after the intense fire swept through the area, there is now a knee-deep covering of regeneration, and the ground beneath it was a minefield of diggings made by foraging Quenda (Southern Brown Bandicoots Isoodon obesulus). These native marsupials are known to respond well to fire during the early stages of regeneration, benefiting from the new, dense cover (that protects them from predators) and the source of 'goodies' (worms, beetle larvae, roots, etc) in the richly fertile ash bed which they dig in to feed.


Spending time in these two relatively small but beautifully diverse reserves made me realise how important it was to be installing nest boxes. As you may know, boxes are designed to provide a source of 'hollow homes' for wildlife in areas where old, naturally hollow trees are scarce. Even before the fire, it was evident that these two reserves were composed mainly of relatively small trees (Jarrah and Marri), and most were too young to have hollowed out (small hollows take at least 100 years to form). Enter an intense wildlife such as the one in question, and the number of large 'habitat trees' (those bearing hollows), which are often dead and highly susceptible to being consumed in the flames or falling over, becomes even further reduced. We indeed found several such trees charred and lying on the ground, emphasising the importance of nest box installation to replace them.


Different species of animals have different requirements for nesting and roosting (or den) sites, and seeing as the Perth Hills are known to support a large diversity of creatures, I built a variety of nest boxes to help cater for their needs. Most boxes are installed using an extendable ladder, and secured in place around a sturdy fork of a tree using wire. This is passed around the tree's trunk above a horizontal limb and hung in a large loop (which allows the tree many years of growth without restraint), and then threaded through a length of old hosepipe to protect the bark from the wire. 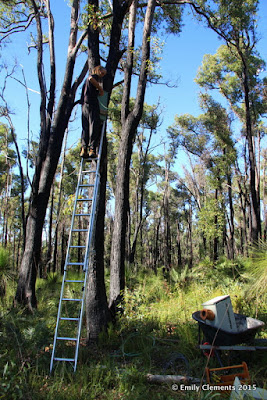 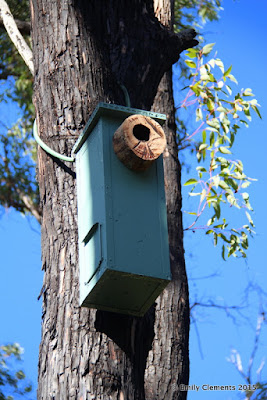 Above you can see a medium-sized vertical nest box in place (click to enlarge the images), designed to suit the nesting requirements for native parrots such as the Australian Ringneck and Red-capped Parrot. We observed both these species during installation so we are hoping that, as we were watching them, the parrots were also looking at us providing them with a 2015 nest site!

Nest boxes for Black Cockatoos (which I've had great success with down south near the Porongurup Range) are much larger than the parrot ones, have a vertical entrance which is designed to replicate their preferred natural nest site, and also take a more involved installation process. These boxes are over a metre long and being quite heavy, they must be hauled into a large tree using ropes and a pulley system. 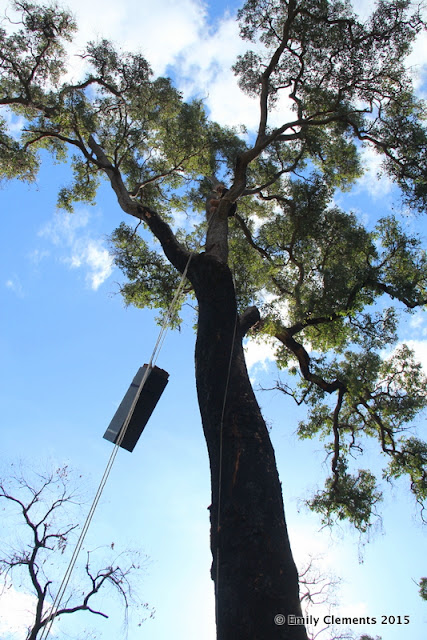 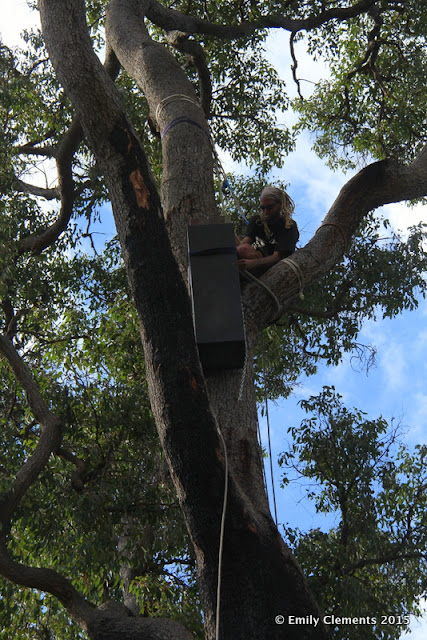 Once it had been hoisted 20 m or so into the canopy of a huge Marri tree, I secured this cockatoo box in place with a large length of chain, again threaded through hosepipe to protect the tree. It was just magic to be up such a tall tree with an expansive view over bushland. This position gave me greater appreciation for the rapid regeneration, and was also a nice place to be listening to the soothing calls of nearby Red-tailed Black Cockatoos, hopeful candidates for this new hollow home.

The last design of nest box we hung today was one for bats. Most people picture some kind of blood-sucking vampire when they read the word bat, but our local hills species are very cute 'microbats', nothing more than a tiny mouse with wings. Bat boxes have a small slit entrance at the bottom, allowing these delicate mammals to land and crawl upwards inside the box, where fine wire mesh allows them to cling on inside. Microbats are seldom seen or heard, but they are immensely useful insect eaters that silently roam our bush at night and consume many of the 'bities' that have been known to cause us barbequing Auzzies an itch or too! Bat boxes are made to provide a similar diurnal roost site to a natural site, such as a small cavity beneath the bark of a tree.


So, as the sun set on another beautiful Djeran (late Autumn) day, it was a thrilling feeling to know that not only is the burnt Parkerville bushland well on its way to a new phase of post-fire life, but that it is now well-equipped with a diversity of artificial homes for local wildlife. And seeing as we are well in time for the Kambarang (Spring) breeding season, I am super excited to see which boxes might be used later this year! Thanks for the help Emily :-) 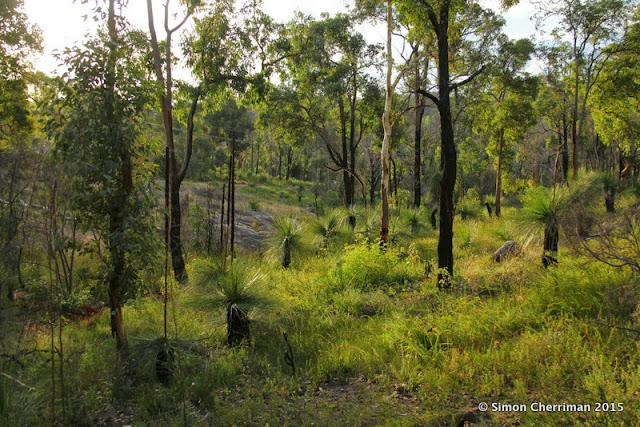