Nest Boxes... on the inside 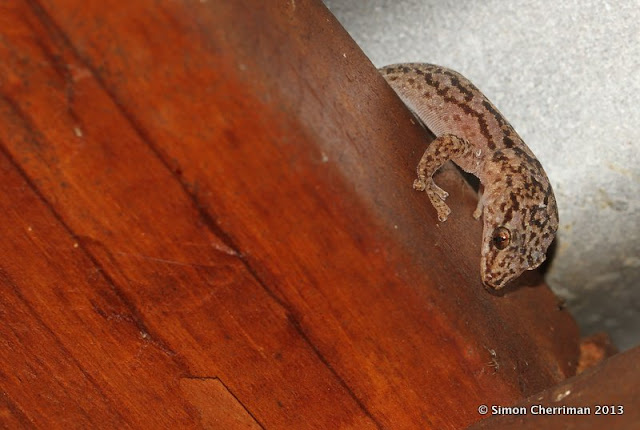 It's not just birds and mammals that use the nest boxes I make. While these larger creatures are the 'target market' for most backyard wildlife homes, there are other critters roaming around which we may not even think of as being possible tenants. Today I removed one of the boxes from a tree in our backyard for some maintenance (it was very old and due for replacement), and noticed a large Huntsman Spider clinging to the inside wall. This is not the first time I've experienced this - many years ago a female huntsman reared her babies inside a box previously used by parrots. But it was when I took the box to the shed and began taking it apart that I noticed some really cool little surprises.

When I un-threaded the wire from the length of hosepipe through which it had been placed to protect the tree's bark, a small shape fell out of the hose. Closer inspection revealed a beautiful Fence Skink (Cryptoblepharus buchananii), who had been hiding inside this rubber hollow chamber for protection. This species of native lizard, quite common in the south-west of WA, is a specialist of dead rotting timber on standing and fallen trees. Large logs are its playground and it can often be seen emerging from small holes to bask in the sun and catch insects. In the human environment it readily habituates to occupying fences (hence the name), buildings, walls and wood piles, and squeezes into all sorts of tight cracks and crevices to hide from predators. What difference does it make whether your hidey-hole is a natural piece of wood or a man-made piece of hosepipe!? 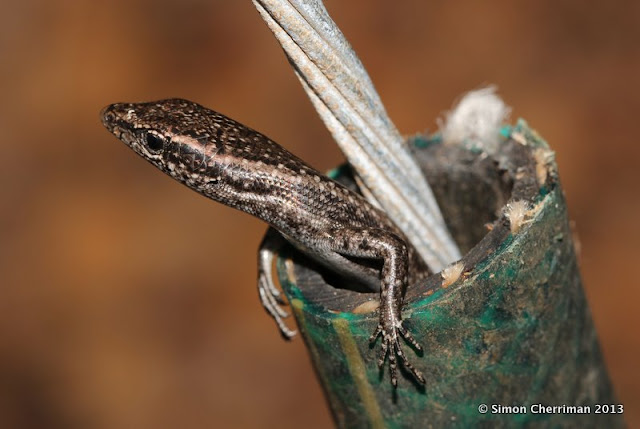 After tipping the box upside down, I noticed many small cockroaches running out from the pile of sawdust on the shed floor - these had found refuge in the box's sawdust and woodchip layer which is placed on the floor of the box, replicating a natural tree hollow. Cockroaches probably feast on decaying wood debris and small insects which are found in this hidden environment. Spreading apart the contents revealed yet another surprise... 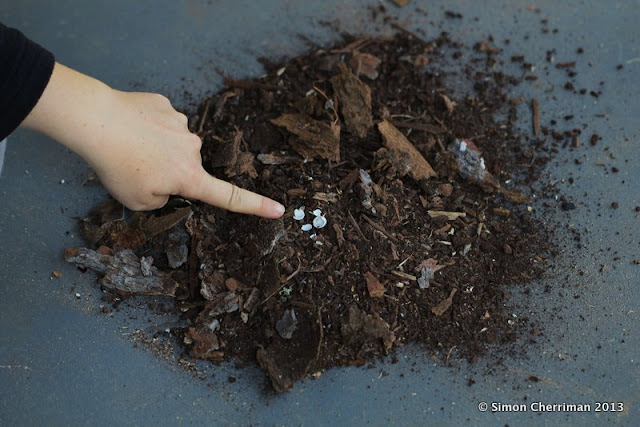 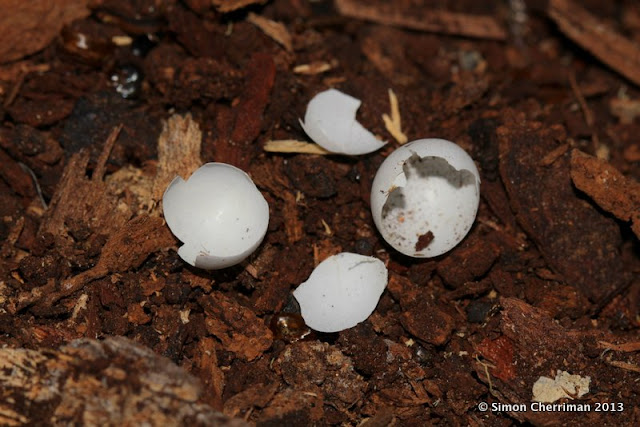 These tiny white flecks are actually eggs... lizard eggs... belonging to a species of gecko we are lucky enough to share our backyard (and house!) with. The Marbled Gecko (Christinus marmoratus, pictured at the top of the page) is another common reptile found across southern Australia. They are brilliant climbers and can be seen clinging to the walls at night, feeding on the abundance of small insects which are attracted to our porch light. We've seen quite a few of these nocturnal lizards before and about a year ago found a baby one inside our lounge room - but now we know where some of them were reared!

So, if you have a nest box in your backyard which you think 'hasn't been used by anything', then think outside the square and beyond the realm of large vertebrates before you rule it out as an empty wildlife home. You just might have a family of geckoes hidden inside.
Posted by Simon Cherriman No comments: 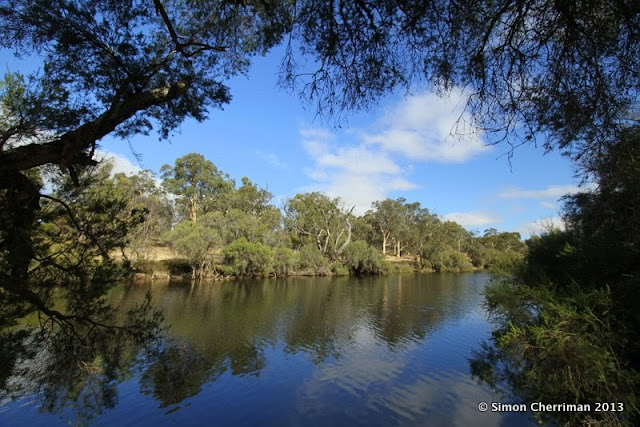 The name says it all. But it probably doesn't do justice for this magically tranquil setting along the Dale River, lined with drooping paperbarks, and forested further afield by glorious open Wandoo woodland throughout which the calls of Rufous Treecreepers and Elegant Parrots echo. Now do you have a better picture?

Today I was privileged enough to spend time at this fabulous spot, installing nest-boxes made by local members of the Beverly Community for Wheatbelt NRM. After some ladder- and tree-climbing to attach various nest boxes, I had an explore around the area and found this Coot nest, well hidden among some dense paperbark foliage. 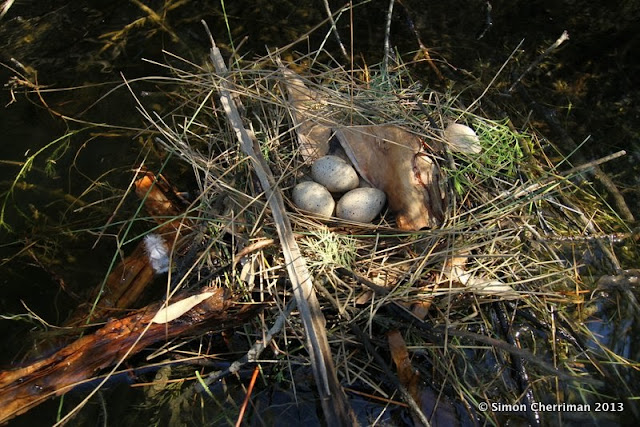 Signs of many other waterbirds were encouraging and I was very impressed by the condition of the vegetation along the river. In a landscape of intense farming, such well protected corridors along waterways are vital for fauna to move between different habitats. Although foxes were present (I actually saw one in broad daylight, as well as many tracks in the mud), thick vegetation and 'island' roosting sites can help ducks and other waterfowl survive a night-time sleep. And of course, healthy plants along our rivers stop erosion and carry out filtering of the water too. 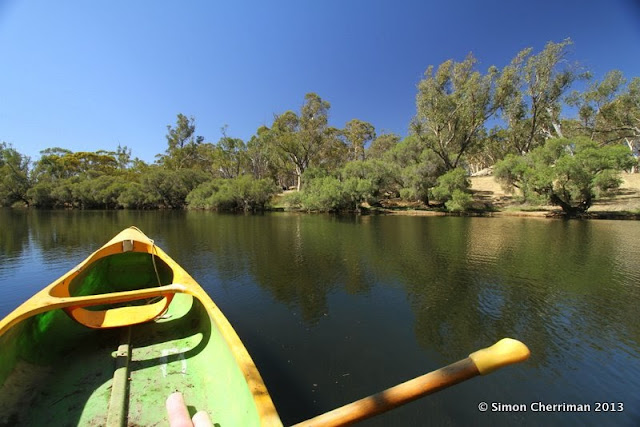 Another pleasing sight was the many relatively old trees bearing hollows, and extent of the remnant Wandoos, which no doubt help more sensitive nesting species like this Elegant Parrot persist in the region. If you drive around the Wheatbelt you will notice that, as far as parrots go, the it's a story of super-abundant Galahs and Australian Ringnecks, but other smaller species have lost the battle. Regent Parrots, Purple-crowned Lorikeets, Western Rosellas, Red-capped Parrots, Carnaby's Cockatoos and several other species are now rarely seen, resulting in an unfortunate loss of biodiversity. To help support maximum biodiversity, a range of trees, especially those bearing different sized hollows (and nest boxes!) is vital. 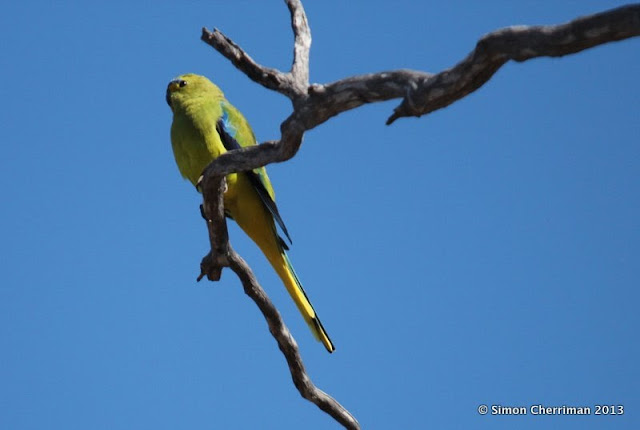