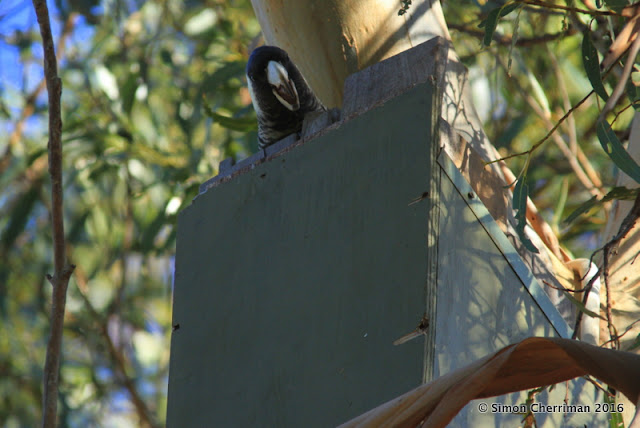 Each morning during this fabulous season of Djeran I wake to the glorious sounds of a large flock of magical Ngolyenoks, the Noongar name for our endemic white-tailed black cockatoo species, leaving their roost site near my house in the Perth Hills. Most of the flock are Baudin's Cockatoos (Calyptorhynchus baudinii), the white-tailed species with a long bill, with a handful of Carnaby's Cockatoos (the shorter-billed variety) among them. Although Baudin's is a common visitor to this area during the non-breeding season, it is not known to breed further north than the Wungong catchment, preferring to migrate to the deep south to breeding sites in the wetter Karri forest.

Over the past few weeks, however, I've observed some very interesting prospecting behaviour.  During mid mornings and late afternoons, when most of the flock has dispersed into the surrounding forest to feed, pairs of Baudin's have floated quietly in to land in the tree-canopy and inspect a variety of nest boxes in my backyard, including those designed for much smaller species like parrots and ducks. In most instances, the male has sat near a box while the female has looked inside, chewed around the entrance, and (with the larger cockatoo box pictured above), climbed inside for a closer look.


As with many creatures (wink, wink!), females are the dominant sex and I've watched them aggressively pushing the males away from the nest box entrances. Some of this behaviour is captured in the below video, which shows a pair of Baudin's inspecting a nest box installed in 2012. This box was successfully used by Maranganna (Australian Wood Duck, Chenonetta jubata) and Dowarn (Australian Ringneck, Barnadius zonarius) last breeding season.

White the WA Museum tells me that Baudin's Cockatoos often prospect for nest sites in the Perth Hills at this time of year but still end up moving away to breed, I remain hopeful that this wonderful, endemic, forest-dwelling species of south-west Australian bird might breed here later in 2016. Given the Carnaby's Cockatoo magic we had last year, I think there's a good chance!

You can read more about the breeding biology and conservation of our beautiful black cockatoos at the WA Museum's Cockatoo Care website. Note: For Noongar bird names, I refer to Abbott 2009's paper which states the two white-tailed species were not distinguished.

Eagles at the Museum 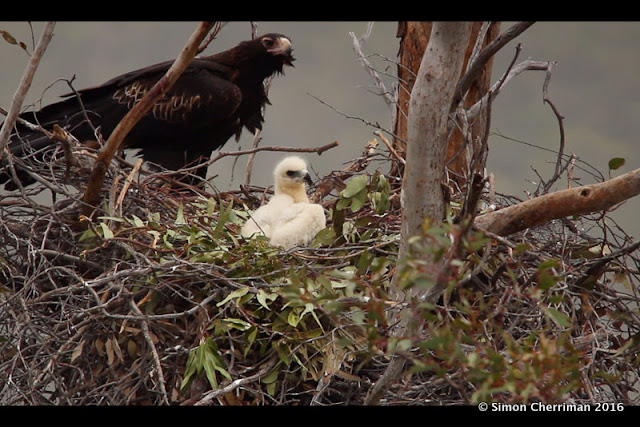 Our fabulous West Australian Museum, which is the source of an incredible wealth of knowledge about WA's natural history, is in the process of updating some of its public educational material, which will create a brilliant resource for environmental educators. I am very privileged to have had a few of my images used in a recent information sheet that the museum produced on Wedge-tailed Eagles. My heartfelt thanks to Ron Johnstone, a friend and mentor in ornithology over many years, for creating this opportunity to share these pictures. Visit this link to read this and other extremely detailed and useful information.
Posted by Simon Cherriman No comments: 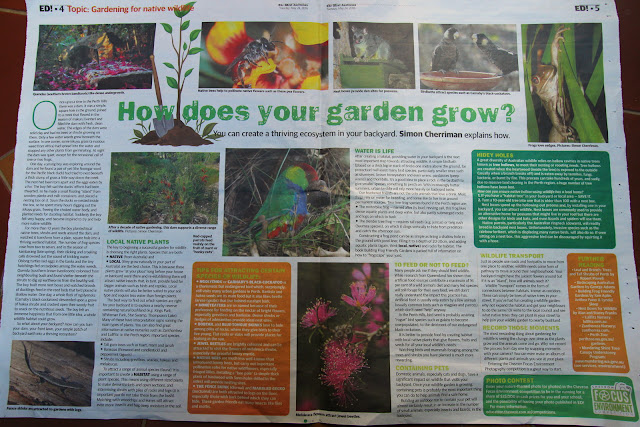 Gardening for wildlife is easy, educational and fun! As I've found in the past 10 or so years, there are amazing rewards to be had from creating wildlife habitat in your backyard. Today's Ed! Magazine in the West Australian newspaper features a double-page spread I wrote about this very topic. The above image shows the feature article as printed in the paper. Click here to *open and download the PDF version and read all about how you can encourage native animals to share your outdoor space! You can also browse this blog or use the 'search tool' (above, top left) to look for posts I've written that might give you ideas and inspiration on how to engage with wildlife in your area.

*I've noticed the text on this PDF looks a bit odd in some browsers. Downloading the whole document ensures it appears as normal.
Posted by Simon Cherriman No comments:

Out of the Mud 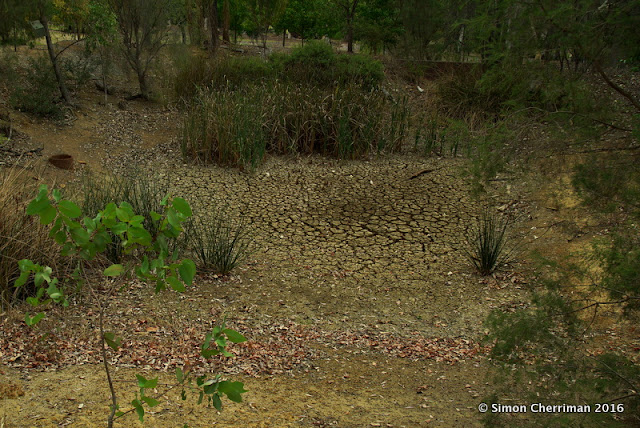 How animals survive the baking Bunuru (summer) heat, which is becoming increasingly harsher each year, never ceases to amaze me. Humans rely on staying cool at the pool, beach or inside with the air-conditioner on, but our wildlife has evolved a variety of strategies to cope with the harsh conditions. Often the trick to keeping alive involves going underground.

Above is an image I took earlier this year of a wetland that I have been revegetating for over 10 years. As you can see here - it's not very wet! However, recent Djeran rains (which have signalled an unusually 'good' start to this El Niño year), have begun to moisten the soil of Perth Hills creeks, and even allowed some wetlands (including the one above) to begin filling up. The liquid messages have reached our subterranean residents and informed them about the new season of life emerging up top. While checking the water levels of my dam over the past few days, and delighting at how fresh and clean the water is, I've noticed one particularly beautiful animal emerging from beneath the softened clay and becoming active: Booyi, the Noongar word for the Oblong Turtle (Chelodina colliei). 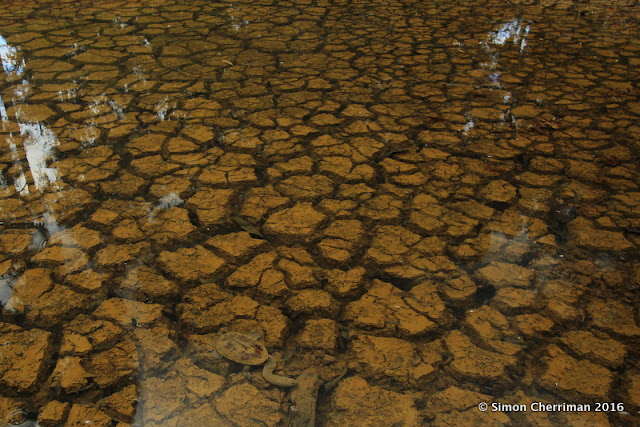 Look closely at the above photo (click to enlarge it) - can you see the turtle in the foreground? When I first glanced at the checkerboard appearance of the dam, I saw nothing but an inundated and very cracked muddy bottom. But then one fragment seemed to be rounder than the rest, and I noticed a long neck begin to move! I watched the Booyi swim very slowly forwards then stop in a small, dappled patch of sunlight, apparently basking for a few rays of afternoon warmth. It was obviously quite cold, as its movements were very slow (Oblong Turtles require a minimum temperature of 18˚C to remain active), and when I moved forward and squatted down to have a closer look, it stayed put (normally these animals are very wary and swim swiftly away at the first sign of danger). As I crouched silently next to the water, the Booyi rose its long neck upwards and pushed its delicate nostrils through the surface to breathe. It was such a beautiful moment to witness from close range! 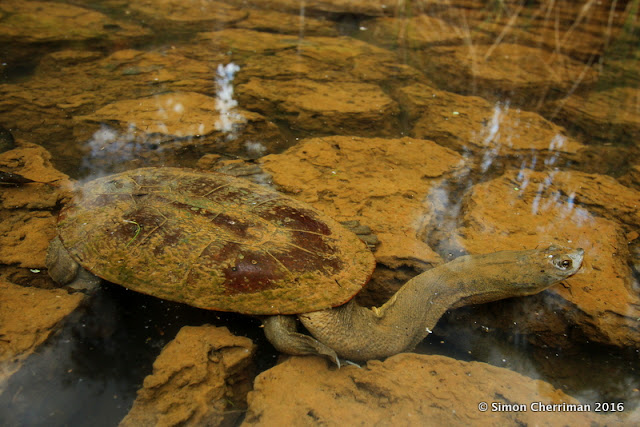 Being so close to the water made me notice a cloudy section between the cracks, where something had disturbed the mud, and I then spotted a second turtle! This one was still mostly buried beneath a large lump of clay, with only the shape of one side of its shell being visible.


Looking to the opposite bank I then spotted a third turtle attempting to hide between cracks in the mud. As you can see below, this turtle was a little less camouflaged than the previous one: its red-brown stain tells us this individual has come from deep beneath a part of the dam with different coloured mud. 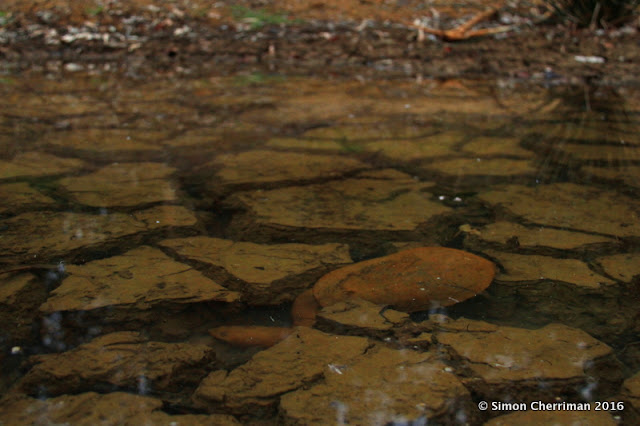 The turtle eventually disappeared deeper, and I noticed it had apparently excavated a small cavity beneath the cracked lump of clay (to its left in the above photo). Oblong Turtles are known to aestivate (go into a state of metabolic 'dormancy') during summer months, and I considered this might even be where this turtle had spent the long summer, when the dam was dry. And after the first rains, perhaps these muddy underwater 'caves' are suitable daytime hiding places while the dam's water is very shallow, and not covering the rocks, logs and reed beds which will offer protection once the water level rises?

I began searching the dam more thoroughly and spotted one more Booyi. This individual was in a very unusual position, hiding on its side in a large crack in the clay, a very well-concealed spot. Before I moved closer to photograph it, I noticed the turtle's eye was closed (or maybe both - I could only see one!), a possible indicator the animal was brumating (a term used to describe dormant behaviour triggered by cold temperatures, the 'opposite' to aestivating). 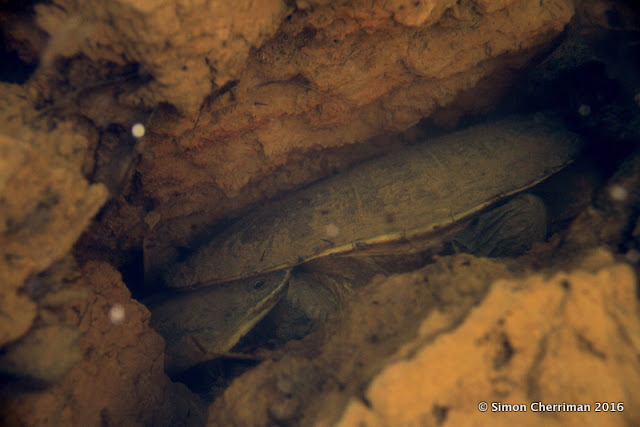 The water might have initially brought them out, but with only small patches of low autumn sun hitting the water, these solar-powered animals swim a fine line between stop and go!

It's not only adult turtles that find refuge below ground. You can read more about how the young of this species start their lives in this news post. In the meantime, I will observe the movements of the adult Booyi to see if they remain present in the shallow, clear water, and if their activity increases when the dam fills up and the daily temperatures increase. An interest in natural history means there is no such thing as boredom!
Posted by Simon Cherriman No comments: