Change in the Feather 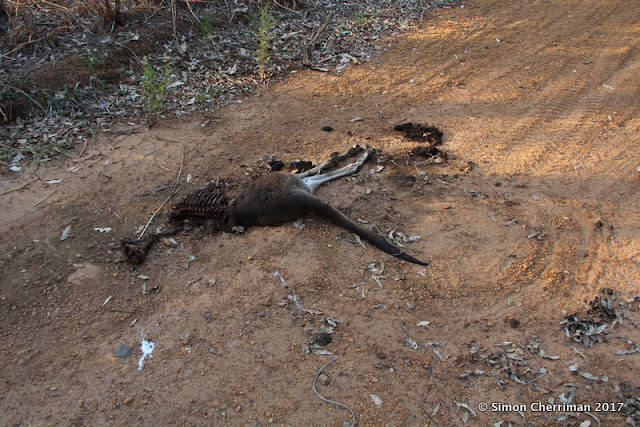 While out in Wailitj (Wedge-tailed Eagle) Kala's home range today, I came across this dead Yonga (Western Grey Kangaroo), a common prey item for eagles during this time of year. Closer inspection reveal some fresh scats (the white blotch in the bottom left of the photo), and footprints in the sandy gravel told me eagles had fed on the carcass very recently. Suddenly, some crumbling bark falling from above made me look up, and THERE, peering down at me with gimlet eyes, was Kala! The hairs on the back of my neck stood up, and I rush to get my camera, but the eagle launched and flew to another tree and I only managed a fleeting snap as he let out a begging call to his mother, who was perched on the other side of the river, and disappeared behind the trees. The next morning, however, I woke up in the dark and headed back to see if I could catch the family back at the 'roo at first light, and sure enough, Kala's golden juvenile feathers were the first thing I saw glowing in the rising sun's rays.

Juvenile eagles like Kala have in their first year a very golden or even blonde appearance. While their breast and belly is often dark brown with pale flecks, the crown, nape (back of the neck), mantle ('shoulders'), and the 2 main layers of wing coverts (median and lesser primary and secondary coverts) are very pale in colour. As the bird ages, its overall appearance becomes brown after 3-4 years, then black after 6-7 years. The 4-5 rows of very pale covert feathers on the dorsal surface of the wing, as seen clearly in the above photograph, are a key feature which allows the bird's age (within a year or two) to be determined, thanks to the detailed observations of Michaels Ridpath and Brooker, who published this information in the 1980's. Despite looking at eagles for so many years, I have not been able to take a photograph of a wild bird which shows this detail so clearly.

What was also very interesting was to notice how Kala's pale feathers had become much lighter in colour since fledging. When I watched him take his first flight from the nest nearly 5 months ago, his juvenile feathers had quite a reddish-brown appearance. Check the last photograph on this news post to see the amazing change!

After walking right beneath Kala, who this time seemed much more accepting of my presence, I spotted his parents perched in a dead tree on the side of the rugged valley slope. Sneaking closer, I was thrilled to be able to photograph both birds together before they slunk away.


The first thing I noticed about this pair was how dark the female (on the left in the above photo) had become since I last saw her 5 months prior. Here's a closer image of this magnificent bird, which shows her overall black appearance, with evidence of some pale nape feathers and a few 'blonde' covert feathers on her wings.


When Kala was still a nestling, I managed to photograph the same pair perched near their eyrie, and back then the female had a much paler nape and her wing. This suggests she has undergone a significant moult since her chick fledged at the end of 2016. 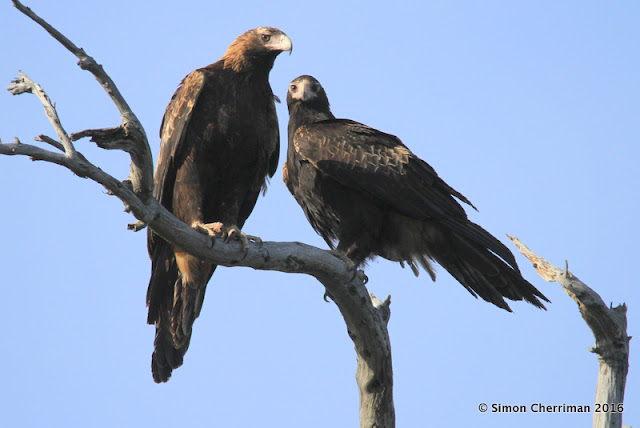 Winding back the clock a little further, the same female was even paler in 2015 when I first noticed her as a particularly young bird and a 'new addition' to the territory. After successfully breeding in 2013 (when I managed to capture quite a bit of footage of this pair's nesting behaviour), the resident (very dark and mature) female had gone missing, and I'd seen the male on his own on a couple of occasions. Then I spotted him with a very pale bird, at first thinking this could be his offspring from the previous breeding season. I soon realised it was his new mate, however, when I observed him 'showing her the real estate' by performing exhilarating dives from above the valley and landing on several eyries. She followed him closely and the pair perched together in several nest trees, keeping a close eye on me while scanning the valley below. On that day I didn't have a zoom lens with me, but did manage to capture a few distance photographs (in very low light!) that show how pale the female was in August 2015.

Although Wedge-tailed Eagles do not normally enter the breeding population while immature, there are certainly records of birds breeding before reaching the normal 6-7 years of age, when they can be more or less considered 'full adults'. Kala's mother was certainly in immature plumage when she joined the resident male in this home range, and it has been amazing to see her darken over the past 3 years and attain her stunning adult appearance now. 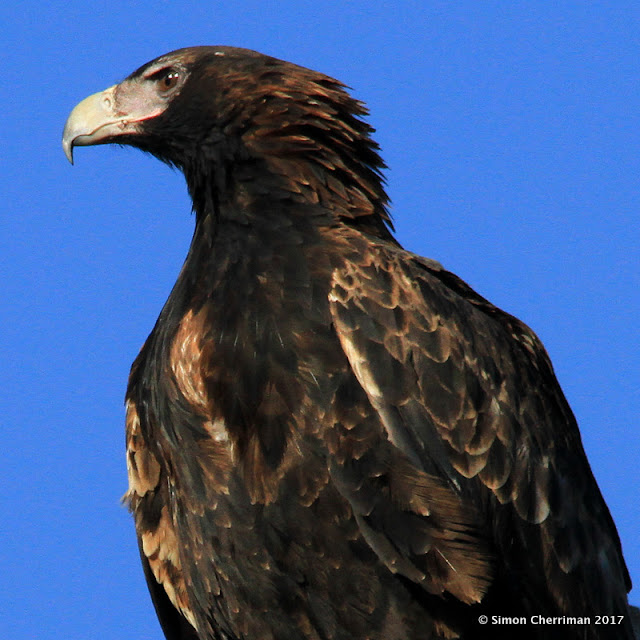 When Kala's parents met in 2015, the pair only inspected and refurbished nests and did not attempt to lay eggs until 2016. This behaviour is quite typical of long-lived birds that do not necessarily breed every year anyway, and it has been very exciting to have a bird that is recognisable and allowed me to follow the pair's progress. The changeover in females provides good evidence that when existing birds die or leave a breeding home range, they can be replaced quite quickly and the home range can continue to be productive. Knowing that we will be able to follow with satellite tracking the movements of Kala, the beautiful eagle that is (almost certainly) his mother's very first offspring, is indeed an exciting feeling!

My last view of this eagle family was seeing Kala swoop in to join his parents on a tall, dead perch tree, and begin to preen his feathers. With this magic sight in my mind, I glanced at my phone to check the time. 8 am. Perfect time to start my day!

You can see more images of these and other beautiful eagles, and a short video from this exciting find, on my Instagram account here. Happy eagling folks! 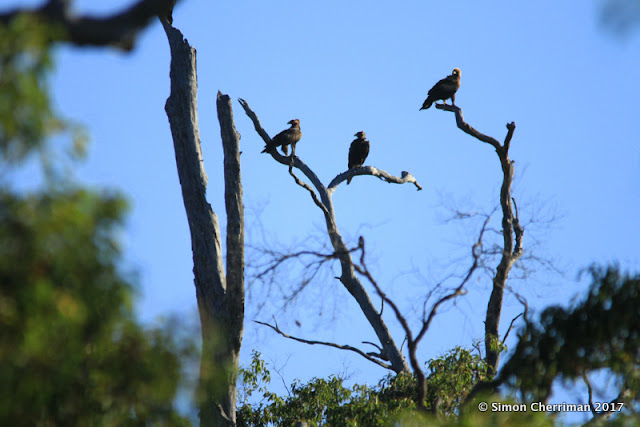 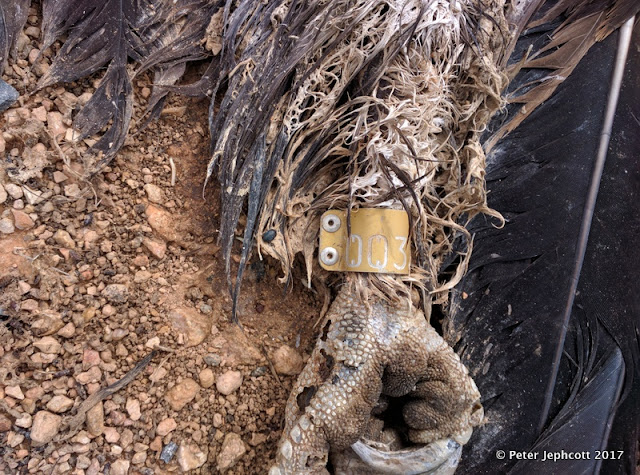 It's never pleasant to find dead animals killed by vehicle collisions along our roads, but taking the time to investigate a carcass can lead to important scientific data being gathered. Peter Jephcott, who was recently crossing the Nullarbor, had stopped to take a closer look at a dead Wedge-tailed Eagle when he noticed it had a yellow ring/band on its left leg. He then took the time to locate the second stainless-steel ring on the bird's other leg, obtain the contact details of the ABBBS, and report the recovery. As it turns out, this bird (#003) was one I ringed as a nestling 15 months ago in the Avon Valley east of Perth, a location ~960 km away from where Peter found it! 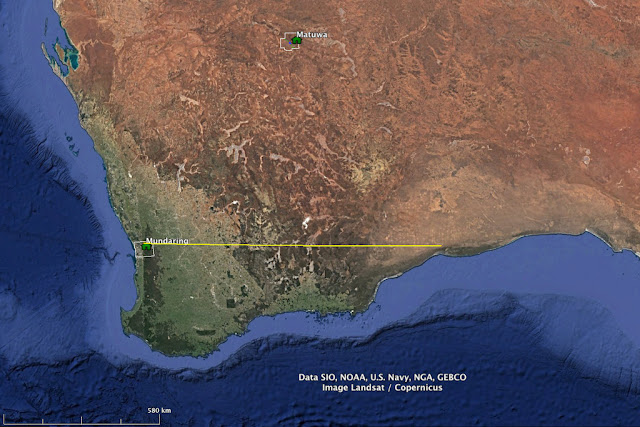 While it is sad that the bird was found dead, it is wonderful to have obtained the information about it travelling such a huge distance, considering this was only the third wedgie marked as part of the current colour-banding study. This recovery is now the longest movement recorded (by ringing/banding) for a Wedge-tailed Eagle, with the previous longest distance of 821 km being recorded in 1965 after an eagle banded in Canberra during 1964 was recovered in Cunningham, Queensland, after being shot. It is truly amazing to continue learning how far juvenile birds can move over such (relatively) short periods of time. Thank you so much Peter for your fantastic contribution to eagle research! I'm hoping that this discovery will inspire others to sharpen their 'eagle-eyes' and make more reports of banded and colour-banded wedge-tails - dead or alive!
Posted by Simon Cherriman No comments: