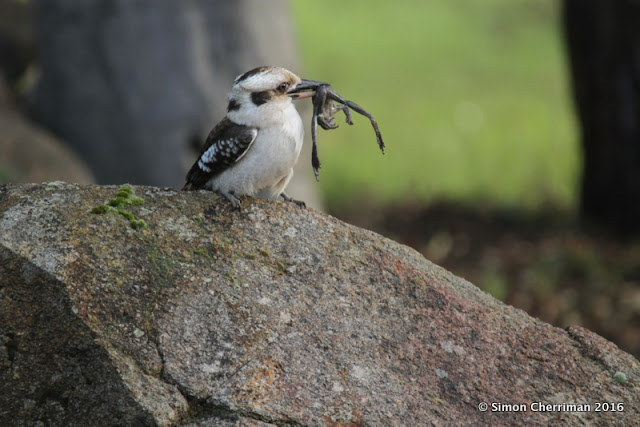 This morning while sitting on the verandah with a cuppa, I was gazing at last night's dew thawing out in the morning sun, when I saw a Kookaburra (Dacelo novaeguineae) suddenly dive from a tree into some tall grass. It emerged with a frog and promptly flew to perch on a large rock and kill its prey using a well-perfected kingfisher technique: multiple 'whacks' against a hard surface. 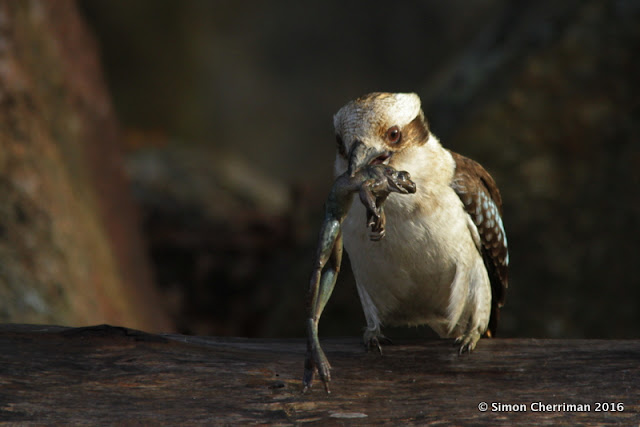 As an environmental educator I am often asked about the impact Kookaburras have on native wildlife in south-west Western Australia, where this species is introduced. It is true they do kill a variety of vertebrates, like the unfortunate Motorbike Frog (Litoria moorei) shown above, as well as other frogs species, reptiles, and the nestlings of small birds like the Splendid Fairy-wren (Malurus splendens). However, the important thing to consider is not whether or not Kookaburras eat certain animals, but what the overall effect of this eating on the prey species is. Like most predator / prey scenarios, the situation is complex, but I suspect Kookaburra impact is strongly related to the habitat structure where they live. Dense cover will provide refuge for small vertebrates and in many cases allow them to persist, despite the presence of Kookaburras. Kookaburra hunting also cannot be considered in isolation, because the presence of other predators (for example raptors, large snakes and roaming cats) undoubtedly affects the abundance of small animals too.

While conducting a variety of environmental education activities, I have noticed there is a widespread misunderstanding about the concept of predation. Quite a few people I've met actually dislike predators because they kill other animals! Humans like to sympathise with prey species, because for some reason we feel that everything should survive, especially if it is an animal deemed (by mainstream perception) to be 'cute and cuddly'. But the fact is, predation is a completely natural part of any ecosystem, and a vital process in its functionality. It is perfectly normal for animals to die! When eaten, prey animals pass on the energy in their bodies to predators in the same way that grass passes its energy to a herbivorous kangaroo, so a good way to help 'cope' with witnessing acts of predation is to rejoice at how that transfer of energy is helping another creature. And ultimately these predators are killed too - by each other, unforeseen weather, or old age - and their energy is then recycled in the environment.

I'm not defending Kookaburras, because as a biodiversity conservationist I strongly support to conserving animals that are native (and especially those endemic) to this unique part of the world. A significant part of helping such species is controlling invasive pests. Cats (Felis catus) and European Foxes (Vulpes vulpes), for example, have been shown through a multitude of scientific research to have negative impacts to local native fauna. But I am yet to see any scientific studies which document actual (rather than perceived) threats of Kookaburras to wildlife. I think it would be useful to have research that measures the outcomes of controlling these introduced species so we can learn more about their role in south-west WA. If you know of any such research, please comment below!

It is also important to emphasise that the cumulative impact of the many threats imposed on urban and peri-urban ecosystems by humans is significant, and probably far greater than the impact of any single predator (except, perhaps, cats, which are both feral and domestic and kill numerous native animals every night). In many ways, we can be considered to blame for potential Kookaburra impacts by clearing native understorey vegetation from the land we occupy, to create (at least, in the Perth Hills), a 'comfortable, hobby-farm lifestyle,' and in doing so, reducing protection for the smaller vertebrates that fall victim to these giant kingfishers. Humans are part of every ecosystem, and ecology is a complex field of study. You might even say it's a mouthful. 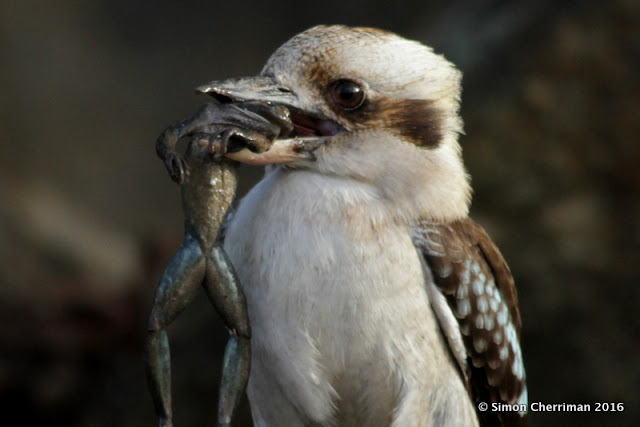