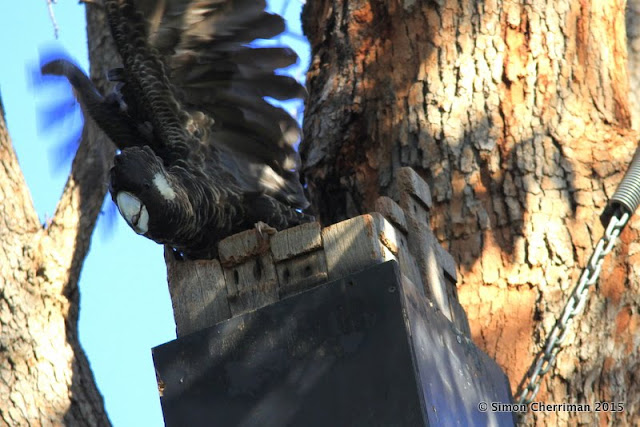 The chew-marks on the sacrificial hardwood planks around the rim of the nest box were suspicious, but after whacking the base of the tree-trunk several times in the hope to rouse any occupants, it seemed to be empty. Eager to gain a look inside for more clues, I began pulling a climbing rope over a sturdy fork in the beautiful Marri tree in which the large nest box hung. Suddenly, as the rope neared the box, I heard claws grapple the metal ladder inside, glanced upward, and in a black-grey blur, glimpsed a bird's wing and head poke upwards. The bird paused just long enough for me to focus on an off-white cheek patch, then burst forwards and spread its wings, the glorious white panels on the fanned-out tail catching the morning sun. A CARNABY'S COCKATOO!

Today I had the privilege of spending the day in Parkerville and Stoneville with a team of Friends Groups and Mundaring Shire staff, inspecting nest boxes that I installed in burnt reserves earlier this year. Overall we found a high occupancy rate with 19 of the 34 boxes checked (56%) being occupied or showed signs of being used this year. Two boxes had been vandalised so were taken for repair/replacement. There were mixed results with the occupancy of different designed boxes - none of the bat or pardalote boxes were occupied, probably owing to the fact these species require smaller hollows and have many alternative breeding/roosting sites. Eight boxes had clutches of Australian Ringneck Parrots (Barnadius zonarius) inside, three had Galahs (Eolophus roseicapillus), and several others had evidence of Brushtail Possums (Trichosurus vulpecula) denning inside, although we didn't see any possums on the day. Keeping in mind that checking one box on one day doesn't mean it has never been used - the tenants may have simply been sleeping elsewhere! It was so pleasing to see local wildlife clearly benefiting from these artificial hollows... and for one species, the benefit is just the sort of thing it needs to perhaps save it from extinction...

I cannot find words for the feeling inside me when I watched the beautiful and magic Carnaby's Cockatoo (known as 'Ngolyenok' in the Noongar language) emerge from the cockatoo box! This species normally breeds much further inland in Wandoo Woodland of the Wheatbelt region, and although there is a recent increase in breeding records closer to the Swan Coastal Plain (thought to be due to habitat loss and a drying climate), I didn't imagine finding a nest box that was only installed a few months ago to be so quickly occupied by a bird that has previously only used artificial hollows placed within 1km of existing nests!

A quick tree-climb revealed she was sitting on a clutch of 2 eggs, laid on the bed of woodchips my friend Emily had so diligently collected on the day of installation. I can't reveal too much more at this stage... but I will be back to follow up on this story with great enthusiasm! 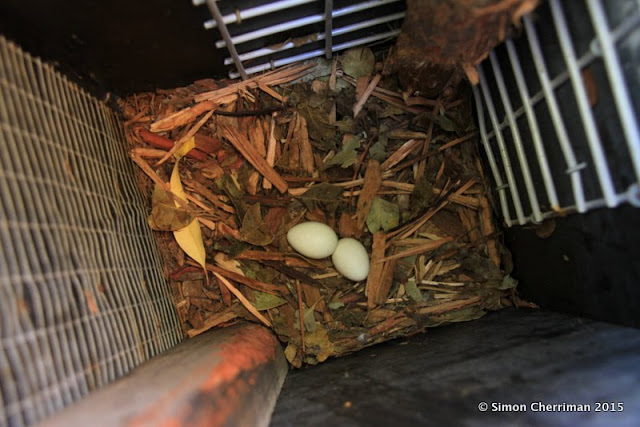