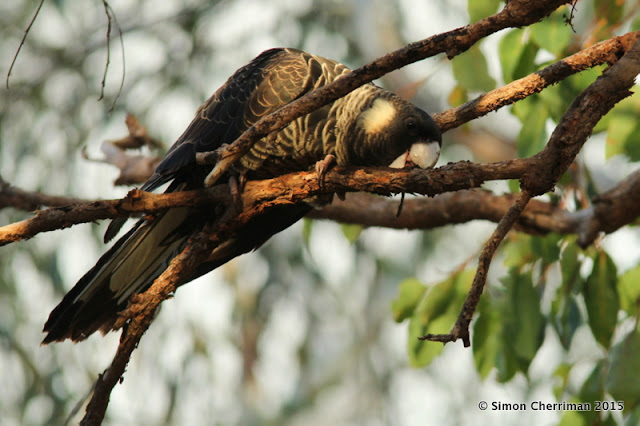 Carnaby's Black Cockatoo (Calyptorhynchus latirostris), or Gnolyenawk as it is known in the Noongar language, is well known for its ability to crack open the hard, woody fruits of native south-west Australian plants to extract the nutritious seeds inside. It forages at all levels of the canopy, hanging pendulously from drooping Marri (Corymbina calophylla) branches to clip off large 'honkey nut' fruits, and flapping down to almost ground level to sit atop low, spikey Hakea shrubs and prune their woody fruits. You can see a video showing some of this behaviour at the Agora Bushwalk website here. Less-known, however, is the fact that Carnaby's (as well as the closely related Baudin's Cockatoo, C. baudinii) love to feed on insects too. When a family trio of these majestic cockatoos snuck into my backyard to search for some 'grub' recently, I crept beneath them to observe their behaviour.

As you can see in the above photograph, this young female appears to be chewing the wood from the extremeties of the Marri tree she is sitting in. I've often heard people assume it must be to 'sharpen the birds' beak', or because they are destructive. But cockatoos are highly intelligent birds, and as I saw after watching the adult pair and their single offspring for some time, the expressions on their faces, and the way they cocked their head to look carefully beneath every piece of bark that they prized off the branch, told me the these birds knew exaxtly what they were after.


The soft timber of Marri is particularly attractive to wood-boring beetles, which lay their eggs on the surface. The larve of these creatures bore into the limbs and create small tunnels as they go, packing the cavity behind them with 'frass', the term used to describe the digested sawdust. The Cockatoos know this, and work their way along the limb, exposing the beetle larvae galleries as they go, and every so often, discover a fat, juicy grub. Using their finger-linke tongue in the same way they do to delicately remove seeds from fruit, the cockatoos pin the grub to their upper mandible, pick it out of its wooden home and swallow it whole, sometimes giving a brief chew on the way to the back of the throat. Such insect 'prey' makes for a highly nutritious meal, rich in protein, a relatively easy reward for a few minutes spent doing some woodwork.

It was beautiful to watch the natural behaviour of these birds getting their evening's nibbles in my own backyard - made possible by the retention of a few locally native gum trees, and a little patience. Next time you find strips of bark on the floor below a Marri tree, you might be able to picture who is responsible for dropping it, and what they've been up to.


While we are on the topic of using evidence to find out 'who's been around', you might wonder which type of bird leaves multiple, tiny 'u-shaped' marks around the rim of a Marri fruit? The culprit is another relatively frequent visitor to my backyard and possibly my favourite bird, Djarrailboordang, or the Red-capped Parrot (Purpureicephalus spurius). The other day I was very fortunate to capture a red-cap in the act of 'sipping seeds from a gumnut goblet', and show just how the beak leaves the marks one finds on a honkey nut. Like the Baudin's Cockatoo, red-caps have a very long upper mandible, used to probe into the fruit and hook out the seeds. The parrot, though, has a much smaller bill than the cockatoo, and the marks left by its lower mandible are high up around the rim, not low under the base, as with Baudin's. Using this evidence, you can easily determine which species has been feeding in your backyard, making hopefully more than just a small impression. 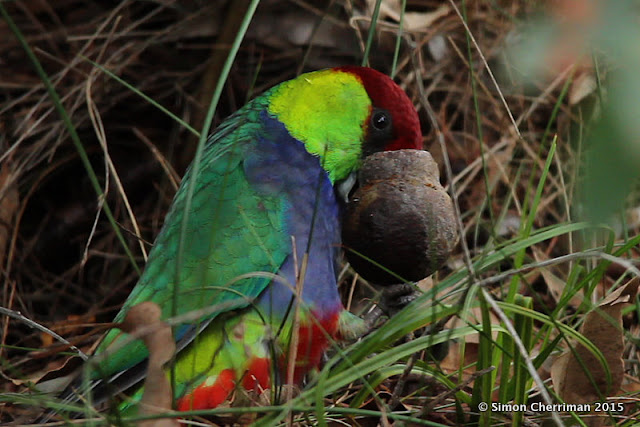