Whose Nest is This? 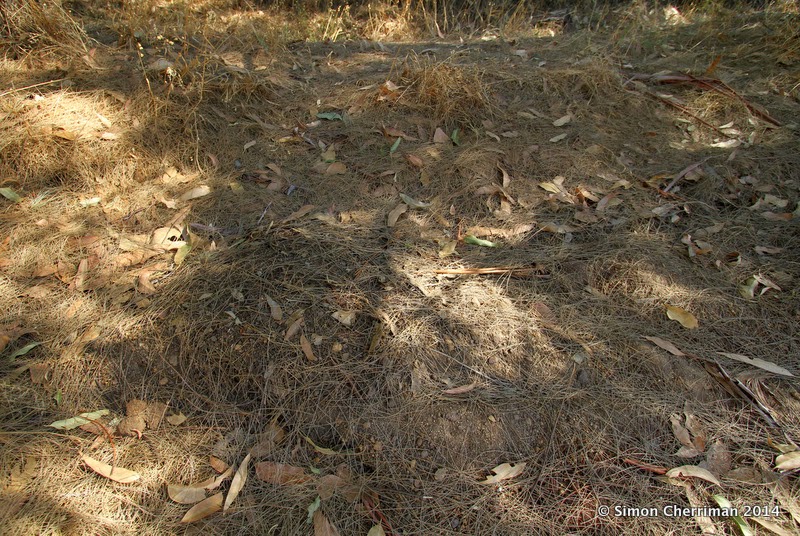 Can you see the nest? WHAT NEST!?? I hear you say! This just looks like a picture of a pile of dead leaves! You are dead right, it does. So let's take a look at another photo, which has been enhanced to emphasise the shadows. Now, can you see the mound shape in the bottom left hand corner of this photo? I've even added a 77mm lens cap so you can get a feel for the size. 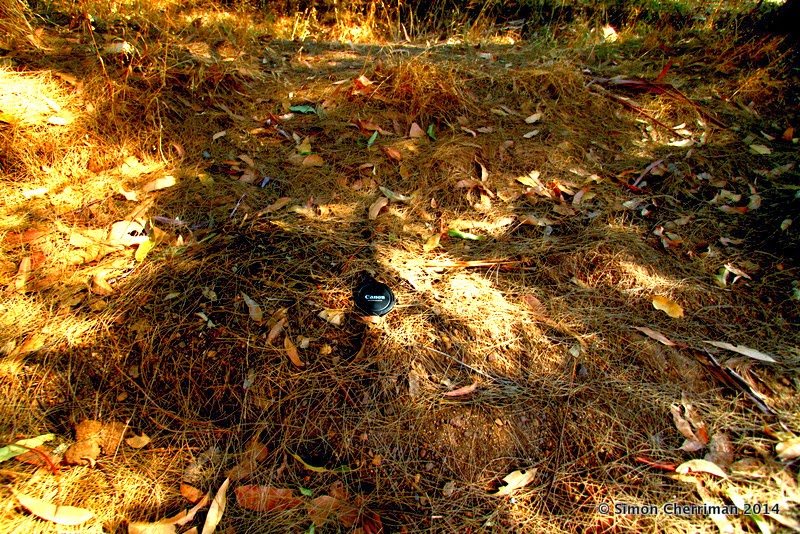 So what is it? When you read the word 'nest' you immediately think this must belong to a bird of some kind. But many mammals build nests too. Rats, mice, rabbits. But this nest was made by none of these introduced placentals. It was made by one of our unique marsupials, a local native digger from the Perth region, found throughout south-west WA. 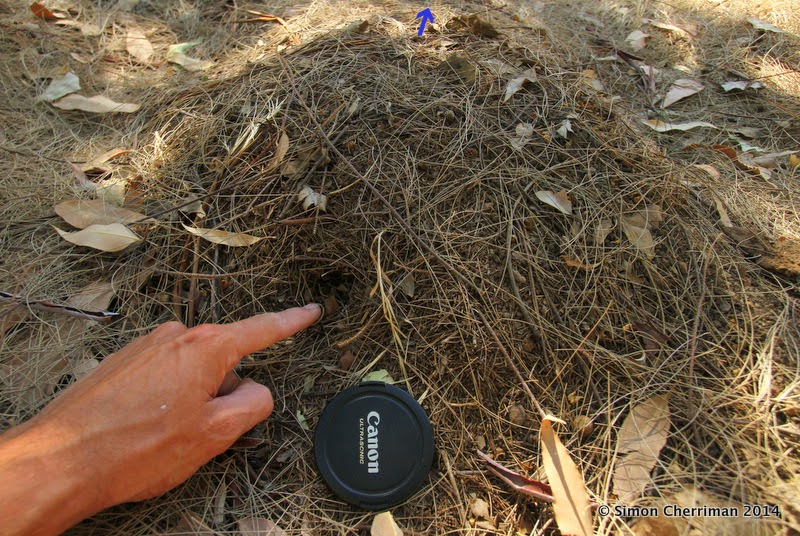 Zooming in a bit closer, we can see the scale of this nest a bit better. It's about the size of a basketball, but more dome-shaped than spherical, and the actual nest chamber is dug below the surface of the ground, deep inside. The outer 'shell' is made from fairly coarse leaves, twigs and soil, mounded up to about 15cm. Where my finger is pointing is the entrance, and on the opposite side is the 'exit' (shown by the blue arrow), an emergency escape in case a predator comes in the front. This seemingly tiny hole must be made by a tiny animal, right? Not really. It's much bigger than my fist.

Ok, have you guessed who yet!? It's the nest of a QUENDA, or Southern Brown Bandicoot (Isoodon obesulus). The photo at the top of the page shows where I had an old boat stored upside-down in my parents' backyard, and when I moved the boat recently, I found it had provided a very useful hiding place for a Quenda to build its nest. There were in fact two nests there, an older one and a newer one. This is something that is very rare to find, as these clever marsupials usually hide their nests very well in thick vegetation. In native bushland you would really struggle to find one as they blend in even better. As far as I am aware, it is the female who makes this as a safe place to leave her young when they get too large for the pouch, although I have found a nest in which a single and quite large juvenile was sleeping, indicating all Quenda may make nests.

Whichever the case, bandicoots don't live in the same nest permanently - I've found several which I've known to be active for some weeks and then these become abandoned and the owner builds another one. I made sure this nest was well and truly vacated before dismantling it carefully to take this series of pictures. 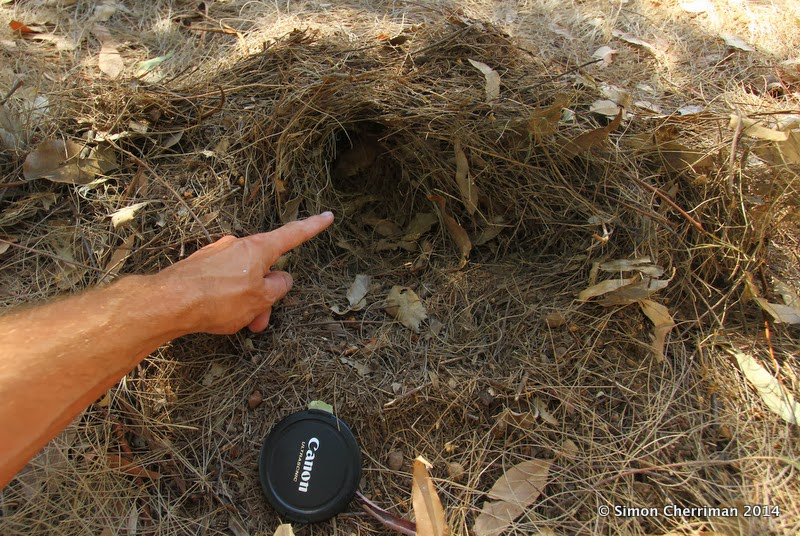 You can see here what the inside of the nest chamber looks like - it has a much thicker lining of larger leaves and there are also finer grasses in there. The nest chamber is about the size of a large grapefruit. You can see the perfectly rounded shape which would be an ideal place in which a cozy Quenda can curl up, sleeping safe from predators during the daytime.

Next time you are gardening, keep an eye out under that thicket of shrubs or beneath some old tin in your backyard, and you might get to see a Quenda nest yourself.
Posted by Simon Cherriman No comments:

Out of the Ashes 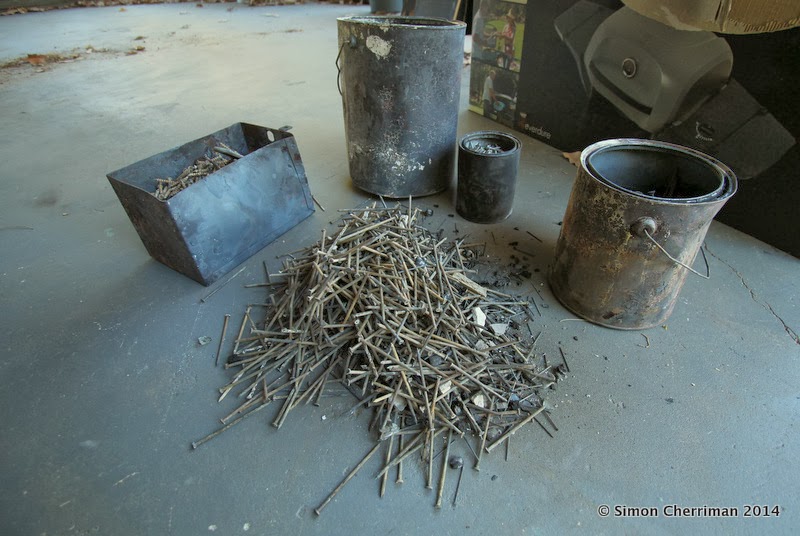 The Parkerville/Stoneville bushfires have been devastating for the local community - houses lost, lives changed forever. But the positive outcome has been the amazing way everyone has come together to help out, a true example of what humanity is about. Today I helped dismantle the twisted metal and rubble that was once a family's home, to give them a 'clean slate' to start rebuilding again. The owner kindly donated me these boxes of screws and nails, burnt in his shed. Although they look like rubbish these fasteners will be used for the construction of nest boxes - keeping our Re-Cyc-Ology theme alive. No matter what happens we can all reuse material which may at first glance seem like waste. It is this mentality which helps us recover from shocking disasters like the recent fires - and, as this Zamia is now doing, start on a journey of new growth. 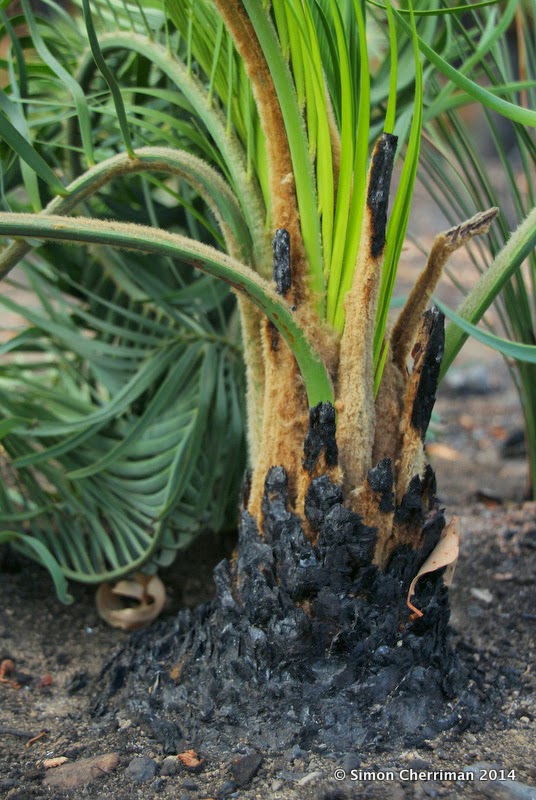 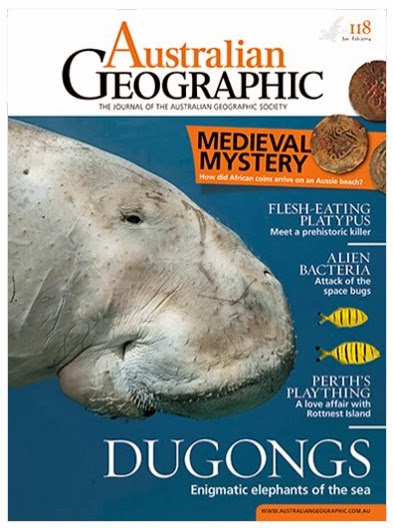 The first Australian Geographic magazine of 2014 was released today! This is exciting because special subscription editions of this issue contain a documentary co-produced by iNSiGHT Films, with wildlife footage I shot during visits to the Kimberely region in 2011 and 2012. "The Last Sanctuary" is a documentary about the efforts of a team of scientists, together with a range of volunteers, to understand the impacts of Cane Toads as they spread into Western Australia's Kimberley region. This film will hopefully air on Channel 9 very soon this year. Contact Australian Geographic and get your copy today!
Posted by Simon Cherriman No comments: