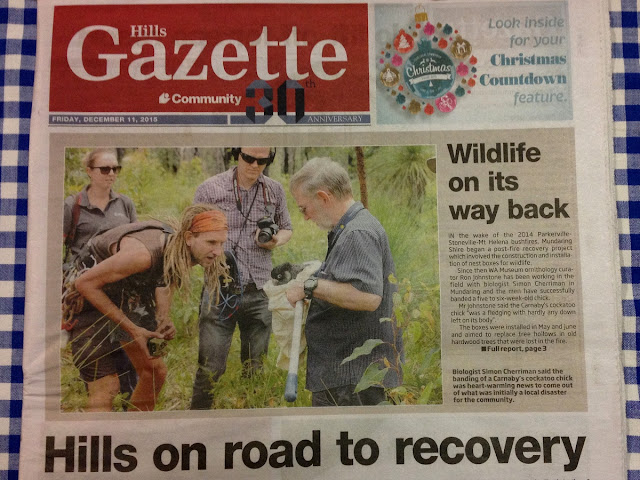 Last weekend we had some fantastic 'out of the ashes' good news regarding nesting Ngolyenoks or Carnaby's Cockatoos. Yesterday the Hills Gazette newspaper published these headlines, and it was so uplifting to see a positive fire-related story making the news. Click these images to enlarge and read the article.

I'd like to express my thanks to the ABC's Alex Hyman for producing a wonderful story and podcast about the morning's events. 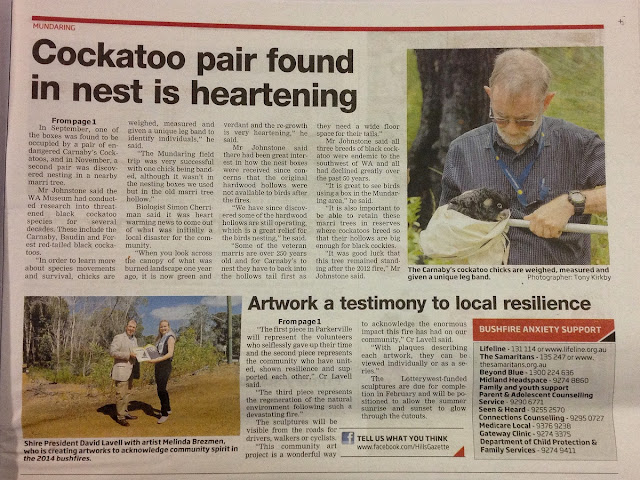 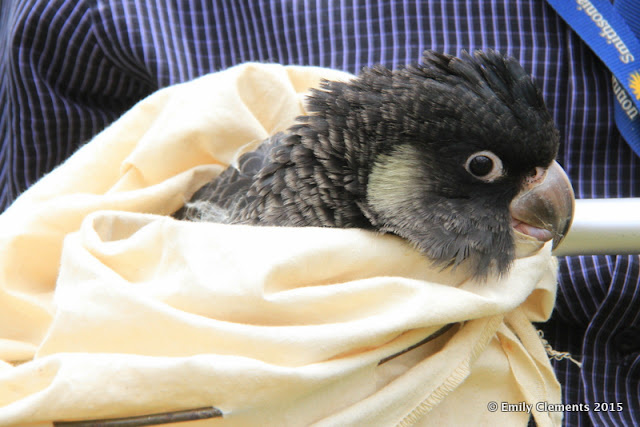 When the 2014 Parkerville-Stoneville-Mt Helena bushfire blazed into the forest canopy and left a landscape charred and a community in deep shock, no one could have guessed that less than two years later, a wonderful good-news story would rise from the ashes. But when one of the nest boxes installed in the burned area was found to be occupied by a pair of Endangered Ngolyenoks (Carnaby's Cockatoos) in September this year, and a second pair was discovered nesting in a nearby hollow Marri tree in November, I could feel some very positive headlines on their way! Yesterday, the air was indeed filled with positive energy as representatives from the Mundaring Shire, Friends Groups, World Wildlife Fund, Parks and Wildlife and ABC Radio tagged along with Ron Johnstone and Tony Kirkby from the WA Museum to participate in a morning of black cockatoo research. The aim was to check both cockatoo nests, and if possible, remove and fit nestlings with numbered metal leg-bands (rings) as part of the Museum's ongoing research into the movements and survival of these wonderful birds.

As our excited group gathered below the nesting box, I had a strange feeling we were being watched, and peered up to see this stunning sight: 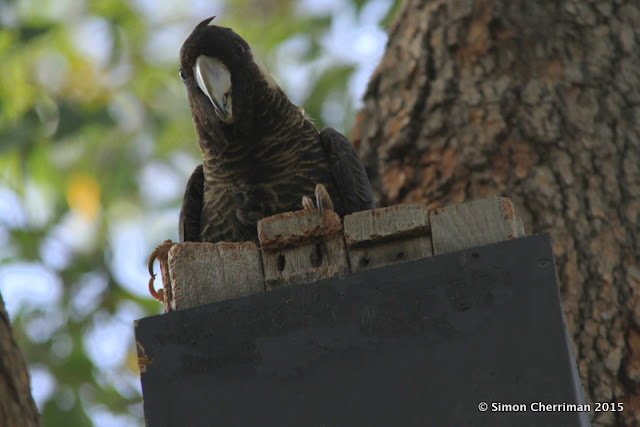 While it was wonderful to observe the female Ngolyenok emerge and peer down from her nest, this vision also created a sense of bewilderment. Based on the incubation period of 28 days, and given we knew the approximate date that eggs were laid in this box, the expectation was that a large, 5-6 week-old chick would be inside. At this age cockatoo chicks are fed twice a day (early morning and late evening), but are left by themselves for most of the day and not brooded by an adult, hence our surprise when one emerged from inside the box about 10 am, well after feeding time. When I climbed the nest to see what was happening, I was extremely surprised to find a clutch of 2 eggs! 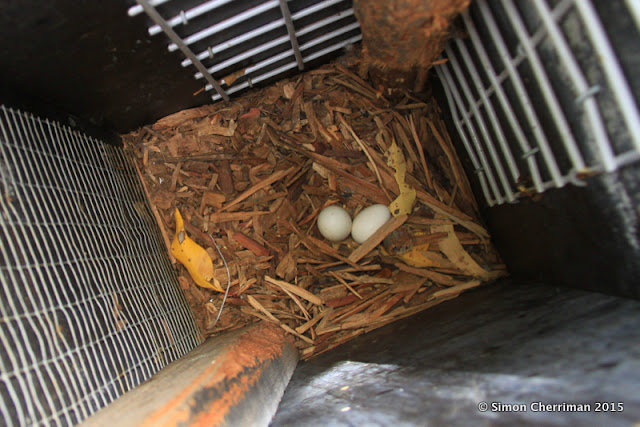 This discovery, along with a strong difference in behaviour of the incubating female cockatoo above (very tolerant), and that of the one observed 6 weeks ago (very flighty), meant that the first nesting event had obviously failed. Ron, the Curator of Ornithology at the Museum and a person who helped inspire me as a teenager to pursue my bird-researching career, and Tony, one of the states leading experts in black cockatoo ecology, suggested that the first pair's chick was possibly predated, perhaps by a Common Brushtail Possum, or may even have been killed by the 'new' female cockatoo if competition for nest hollows was strong.

Despite the unexpected start to the day, our spirits remained high because the box was still in use, and even though the first nesting attempt had failed, there was a second chance for a Ngolyenok chick to fledge from the same nest box. And the tree-climbing and cockatoo nest-checking was not yet over. Since the installation of nest boxes in May and June this year, which aimed to replace existing tree-hollows lost in the fire, and under the WA Museum's ongoing research on black cockatoos, Emily and I have been closely monitoring the behaviour of Carnaby's Cockatoos at this site. After an investigative tree-climb in mid November, I discovered that our second nest (in a nearby hollow Marri trunk) contained a chick aged about 5-6 weeks old: 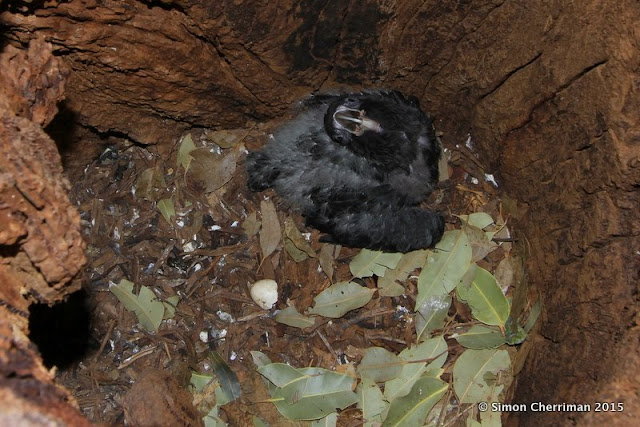 Leaving the nest-box female to return and resume her incubation, we headed to the natural nest tree and I began to set up climbing ropes. I was very excited to be in the bush with two mentors who had inspired me so much! 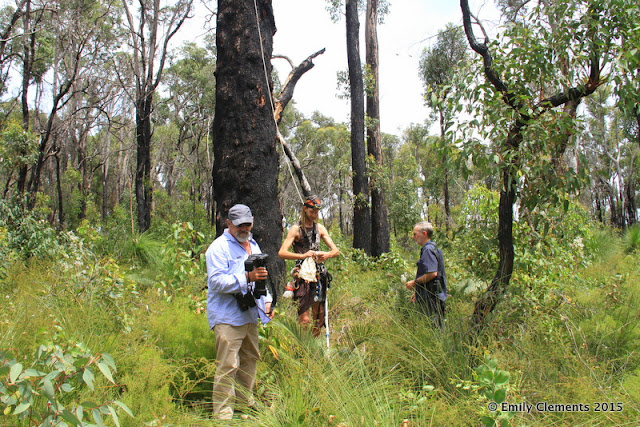 Once I had secured the main line high over a sturdy limb, I began to ascend the rope, leaving the burned lower storey behind as I entered the wonderful canopy of this enormous forest giant. All around me I could see a thriving, living forest, and the charred canopy once so obvious just after the fire was now well hidden beneath a new wave of new, green growth. 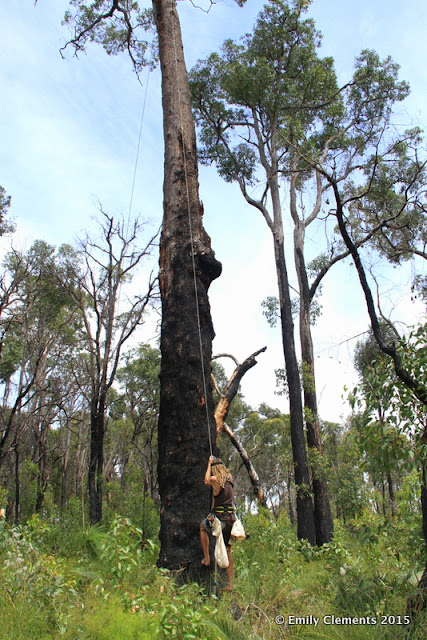 Using a long pole with a hoop bag fixed to the end (specialist cockatoo-wrangling equipment from the Museum!), it took some fiddling around to stretch deep down inside the hollow tree-trunk and reach the Ngolyenok nestling. I then secured it inside a calico bag and (very nervously) lowered this precious cargo down to Ron and Tony.


I was delighted when Ron asked if I would like to band the chick, and I of course agreed! Tony passed a small metal ring to me, which I fitted to the cockatoo chick's right leg using special banding pliers. These rings do not harm the bird, and have a unique identification number which allow the bird to be recognised when it is re-sighted elsewhere. Once sexually mature, Carnaby's Cockatoos have been known to return to the same area to breed, so banding this chick now may give us some useful information on nest site fidelity, and perhaps emphasise the importance of this Mundaring Shire bush reserve for future cockatoo conservation. 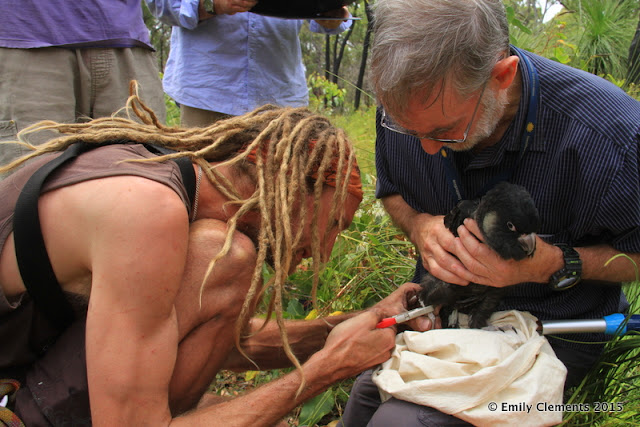 Banding complete, it was time to climb the lofty Marri tree again, hoist the chick back up and return it to the safety of its hollow home. As soon as I watched it roll out of the calico bag and only the floor of the nest chamber, I was overcome with an immense feeling of happiness. What an AMAZING experience! A real piece of magic to emerge from the wondrous environment in the Perth Hills. 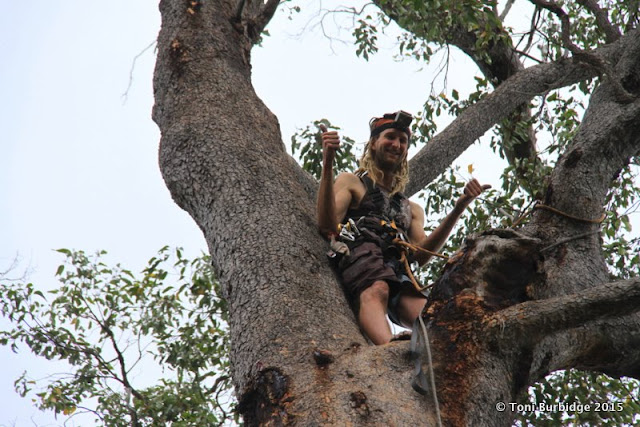 The presence of at least two breeding pairs at this site almost certainly means Ngolyenoks had nested here previously. Perhaps one of their hollows was burnt in the 2014 bushfires... and perhaps our nest box was the perfect replacement. This is a heartwarming good-news story to come out of what was initially a local disaster for the community, and one which thrills me with excitement to know that nest boxes can and DO work! 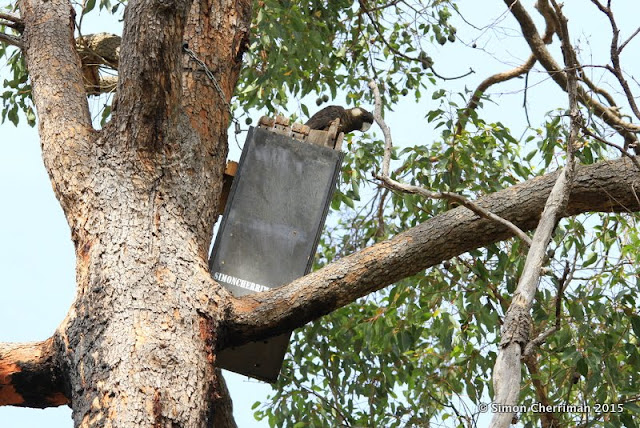