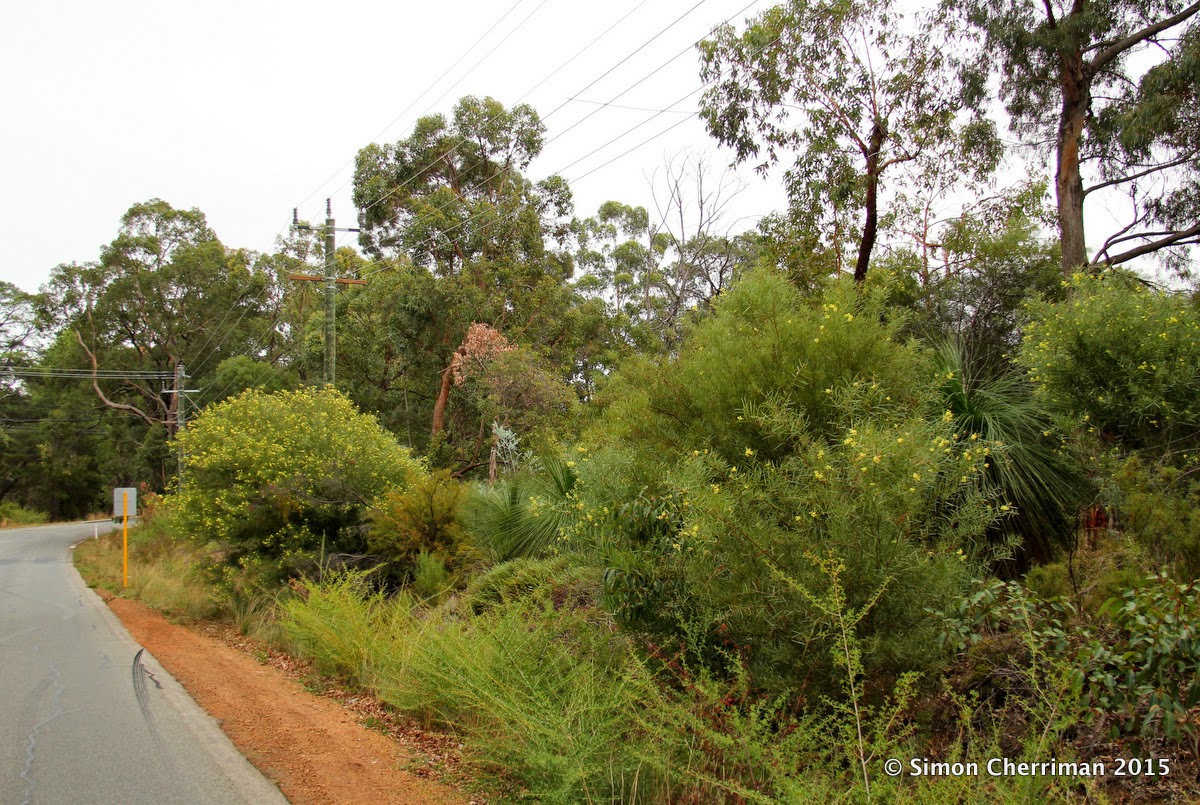 But isn't this just a beautiful wildflower? NO! Flinders Range Wattle (Acacia iteaphylla) has become one of the most common and rapidly spreading weeds in the Perth Hills. In the last 10 - 15 years I have watched it take over natural bushland throughout the Mundaring Shire and choke out native plants. Why is this a problem? It not only disrupts local biodiversity, replacing the normally diverse Jarrah forest understorey with one exotic species (a 'monoculture'), but it increases the bushfire risk enormously. The seemingly lush foliage, which is currently adorned with pale yellow flowers, vividly lining most roads in the Parkerville-Stoneville-Mt Helena-Sawyers Valley area (and beyond), is in fact highly flammable. Try putting a green branch on your next backyard bomb-fire and watch it ignite like petrol. And it's even worse when the plants are dead.


Our 'bush' is often blamed for posing a fire threat to human lives and property, but much of the native Perth Hills vegetation is low and practically incombustible compared to the 5m or so that Flinders Range Wattles grow to. Intense summer bushfires (like the 2014 Parkerville - Stoneville - Mt Helena fire) only become so severe when high fuel loads take the flames from the forest floor roaring into the canopy. There is more to the term 'fuel load' than backyard leaf litter and fallen branches, which is what most people imagine when they hear this phrase. Understory plants (especially weeds) are equally as responsible for allowing fire to reach the canopy, and there are few native understory plants that are as flammable as Flinders Range Wattle (Kerosene Bush, Hakea trifurcata, is perhaps an exception but this is nowhere near as abundant). It is particularly concerning when you see hedges of this plant below power lines, as in the photo above, and this one (click to enlarge): 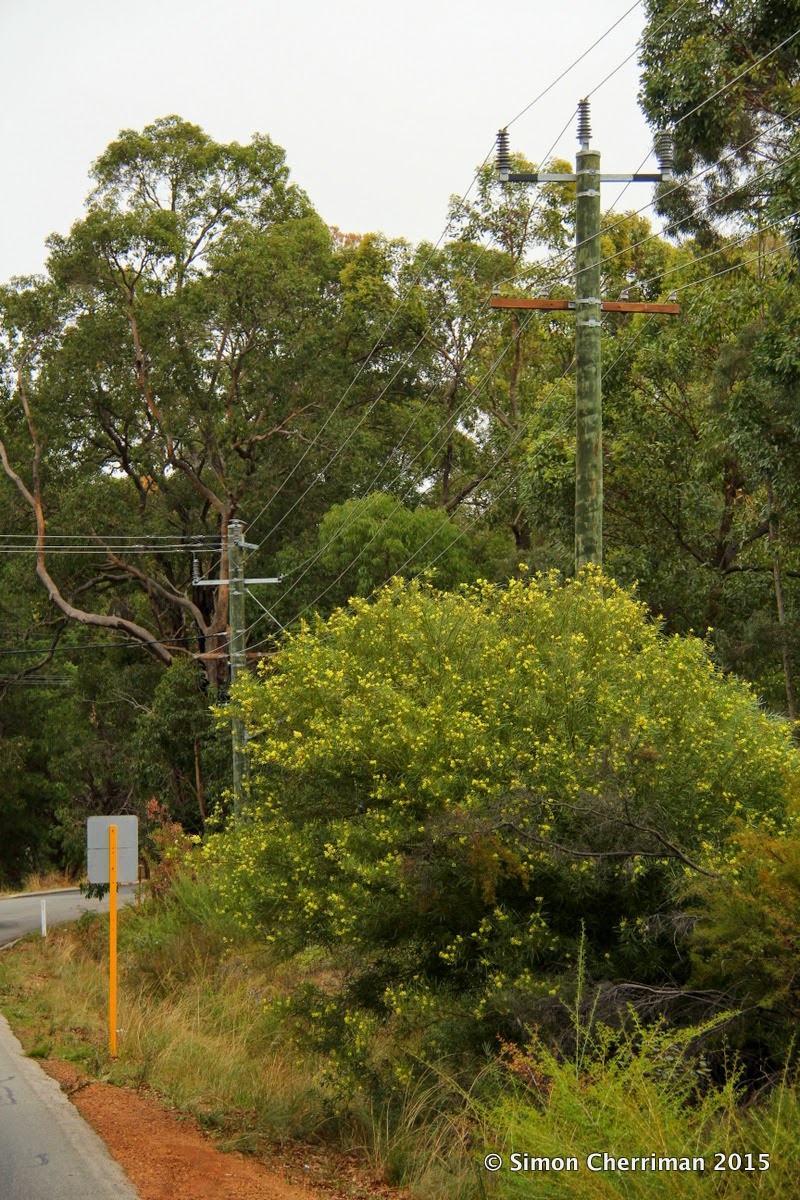 Currently Flinders Range Wattle is in full flower and is easy to spot - you literally can't drive around the Mundaring Shire without noticing it. This makes now a perfect time to identify it and implement control measures. Many people may delight at the sight of a pretty 'native' wildflower, but for me, the bright yellow displays remind us of this invasive plant's ability to set large quantities of seed that can remain viable in the soil for many years. I also think of how native Bronzewing Pigeons (Phaps chalcoptera), which are a granivorous bird that love to forage on Acacia seeds, can readily be observed beneath this weed, filling their bellies and unknowingly spreading it further. And pigeons aren't the only local to exacerbate the problem. This weed is sold as a 'screening plant' by local nurseries, meaning people are actually directly responsible for selling and spreading a noxious weed that sickens our environment and increases the fire threat to our community!

I have seen few attempts made by local authorities or private landowners to control this weed. In early 2014, however, I was encouraged to find Lake Leschenaultia managers had removed several plants around the perimeter of the lake, a place where it has not yet taken hold. This removal of individual plants is a start, but to actually make any impact, a landscape-scale removal program is urgently required. What's more, there are numerous other fire-prone weed species colonising local bushland, which increase every year (Blackberry, Watsonia and other exotic wattle species are some examples), and these species also require urgent attention. Sadly, weed control is currently underfunded and its importance (to both nature and people) is overlooked. Football and city-centre redevelopments are apparently more urgently required.

Human health is intricately linked to environmental health and killing weeds to restore biodiversity does actually benefit us too, not just our wildlife. If we as a community are serious about reducing the risk of bushfires to our lives and homes, then the control of Flinders Range Wattle should be made a top priority. We need to consider the whole picture, not just bits and pieces.

Do you have Flinders Range Wattle on your property? Or on a street near you? If so, then now is the time to take action and get rid of it. Working together as a community with cooperation and vigilance is the only way we will be able to efficiently control and eliminate this exotic plant. You can read about the best control methods on the Mundaring Shire's website, which includes a fantastic replacement initiative.

You can also read more about how the impact of weeds on a local patch of bush has been addressed by students from Mundaring Primary School at the Mardo Reserve website here.

Remember, Planet Earth is a spaceship on which we are all crew.
Posted by Simon Cherriman 13 comments: