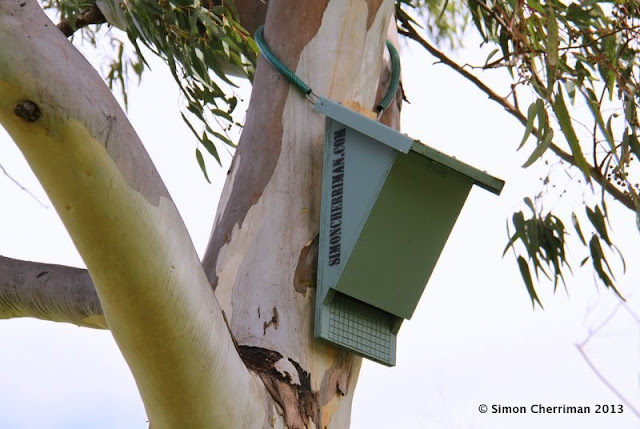 Today I installed 7 bat boxes at Clarkson Reserve in the City of Baywater. These boxes have been put in place with the hope to encourage native micro-bats, in an effort to control mosquito numbers in the area. Bats are very efficient native predator of mosquitoes, and but often lack suitable roosting sites. It's really encouraging to know that people are keen to implement as many natural solutions to environmental issues as possible, avoiding such things as pesticides which are harmful to not only mozzies but a whole range of other animals.
Posted by Simon Cherriman No comments: 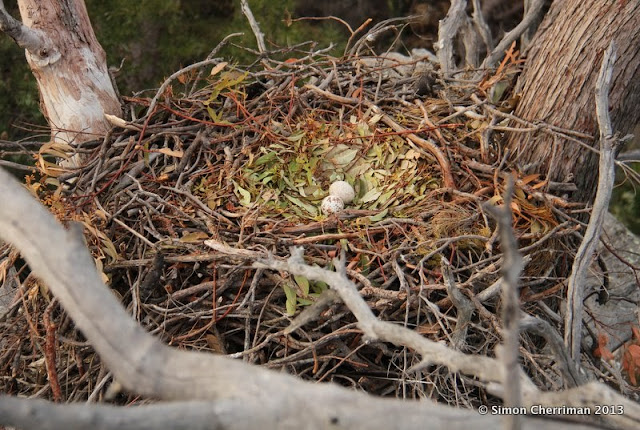 Today I visited this Wedge-tailed Eagle territory and discovered a beautiful female sitting on her nest. She flew as soon as she saw me (from a few hundred metres away!), and I climbed high above the nest, revealing a well-lined nest cavity that housed 2 eggs. This is the tenth year in a row I've made such a visit and followed the breeding progress of this particular pair of eagles. They have built quite a few new nests during this time, using each one for a couple of years then moving on to a new site. But today, almost as though celebrating 'my' decade, I found the eagles had returned to and refurbished an old nest, the one I first recorded them breeding in back in 2004. At the time the nest was brand new that year, but years later had almost totally collapsed prior to this year's breeding season. The giant Jarrah tree in which it sits has now died (as you can see in the photo below), has 2 feral bee hives in it, and several years ago hosted some nesting (feral) Rainbow Lorikeets, but nevertheless it offers the eagles a prominent view of their domain. 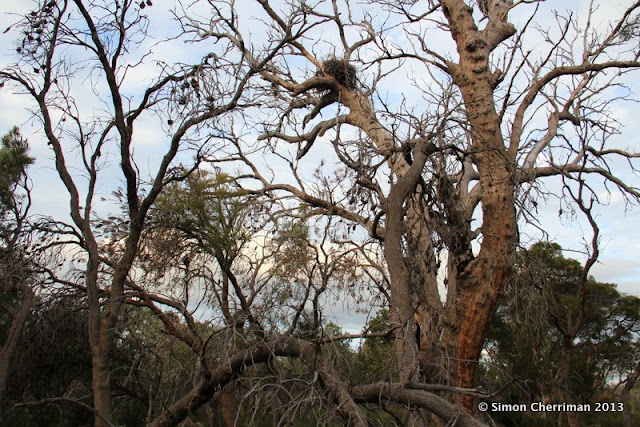 Having a clutch of 2 eggs is the usual scenario for wedgies, and this female has laid 2 every year now for 10 years. Below you can see the difference in egg colouration - one egg seems to 'get more ink' on its way out and consequently is always more speckled than the other. It is also normal for eagles to rear only one chick to fledging age, a pattern this pair has also followed, producing 1 juvenile in 8 out of 9 years, with 2006 being a bumper year for rabbits resulting in both chicks surviving. Unfortunately, 2 of the young eagles produced over the last decade have died, both within months of fledging, after colliding with powerlines. 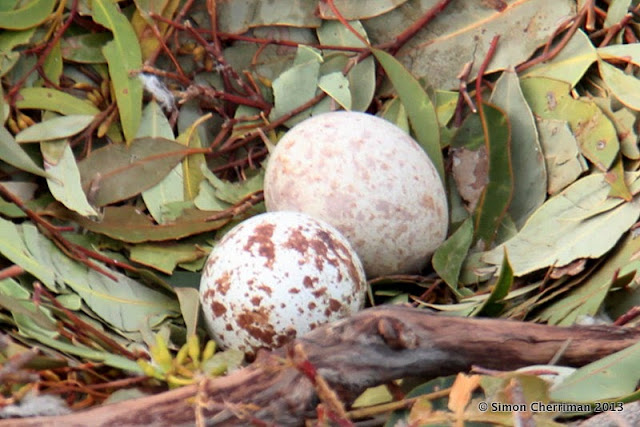 From my position high above the nest on the other side of the tree (the right-hand fork of the above photo),  I could see right over the surrounding Banksia woodland. This territory is one of my favourites for providing context, as just 18km away, the skyline of Perth is visible in the distance. I often use this as an example to illustrate that wildlife is all around us, not a separate thing that is kept away in National Parks, and having our largest species of raptor breeding on a capital city's doorstep is a strong reminder of this. In this photo, you can see the female eagle watching me from 1km away (top right), and if you look really closely, you can also see another much older nest silhouetted against the city skyline, more than 2km away. What a view to celebrate my 10th year of eagle checking! 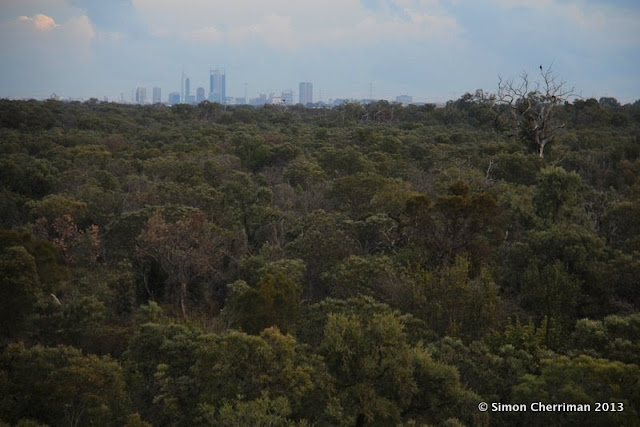 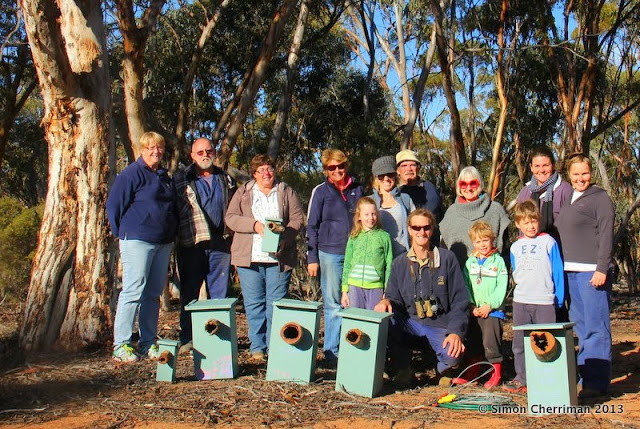 Another month, another nest box workshop! This weekend we headed to Corrigin in the WA Wheatbelt and had the pleasure of working with another fabulous, friendly and fun group of people to build nest boxes for a local bush reserve.

A picture is worth a thousand words they say, so rather than type up a summary about the workshop, I'll put a few of the best photos of the workshop, taken by Gill's mum. Thanks to all the fantastic, fun and friendly people who make our time in Corrigin really enjoyable. 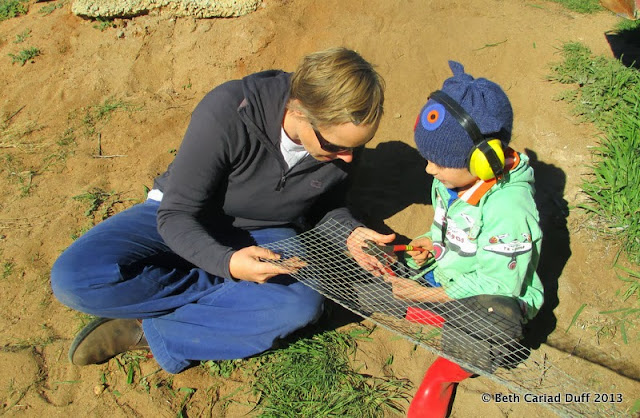 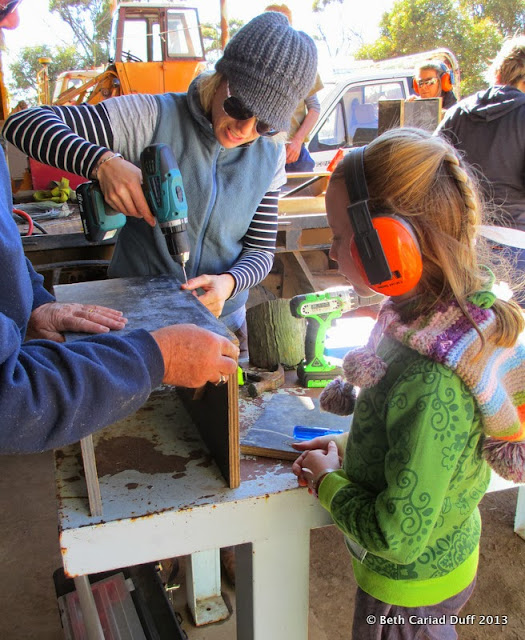 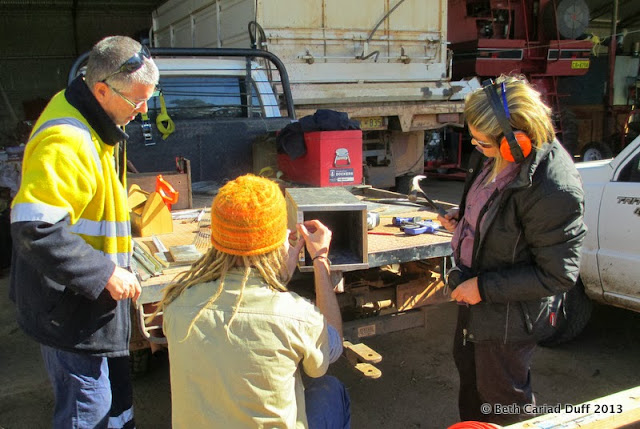 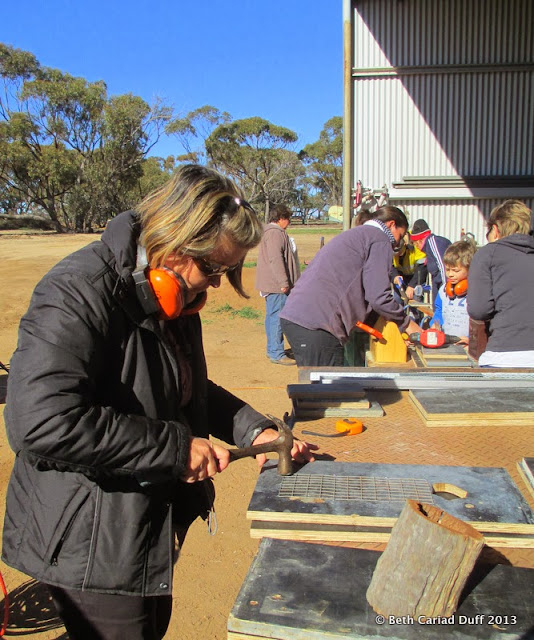 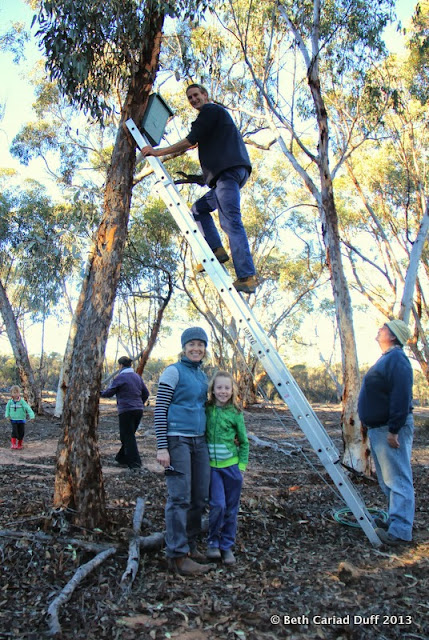 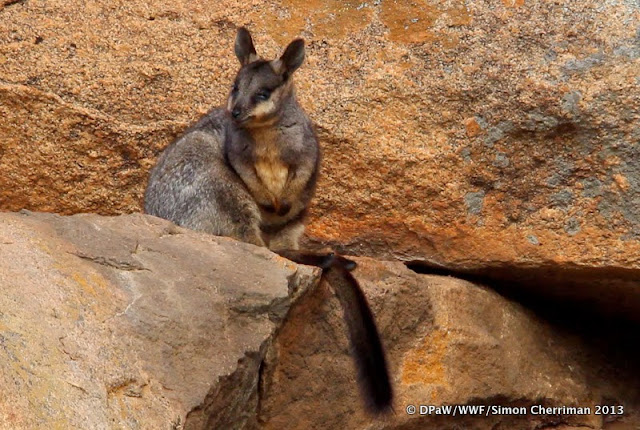 I've just got back from filming rock-wallabies in the WA Wheatbelt region! What is a rock-wallby?

The Black-flanked Rock Wallaby (Petrogale lateralis) is a Threatened mammal once widespread throughout Western Australia, but like many of its cousins it suffered large declines following European landscape changes - habitat clearing, introduced foxes and cats. As part of recovery actions to help increase their numbers, WWF Australia, WA Department of Parks and Wildlife, and local community members have established a predator-proof fence surrounding one of the wallabies' last strongholds. To supplement the population at this location, some animals were translocated from a smaller outcrop of rocks on a private farm. My job was to capture some natural behaviour footage of the wallabies, and then film the translocation as scientists/researchers trapped and move the animals at night.

You can read more about WWFs mission to help save this beautiful animal here.
Posted by Simon Cherriman No comments:

Red-tails in the box! Last night I received a very excited phone call with some thrilling news - a large artificial nest box which I installed a year ago had an occupant! Here you can see a female Forest Red-tailed Black Cockatoo, or 'Kaarak' in the local Noongar language, peering out from the top of the nest box. The photo was taken by Brad Mitchell who had me construct and install the nest box at his Perth Hills bush block last July. From these early signs we think she is currently incubating an egg inside the nest box, and will hopefully have a fluffy chick very soon!

This evening I visited Brad and his son Thomas to see the excitement for myself, and managed to shoot this short clip of her emerging from the box at dusk. Keep tabs on the blog for more updates soon!