Another Cockatoo at ECU 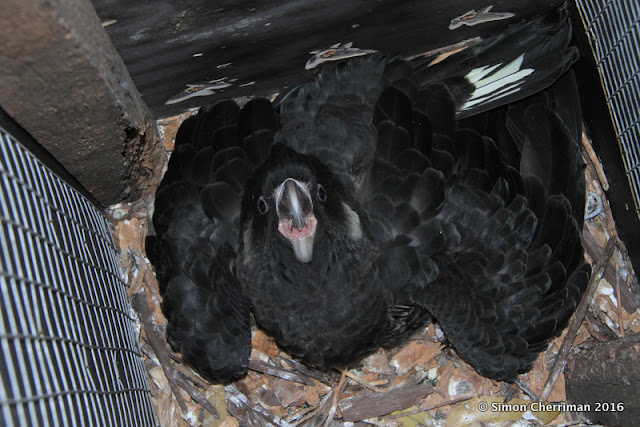 The Endangered Ngolyenok / Carnaby's Cockatoo is showing determination to persist in the Perth Metropolitan area, after one of the first records of the species breeding at Edith Cowan University last year. Today ABC News published a great story on the successful use by this species of some of my nest-boxes installed earlier this year. It gives me great pleasure to know when any nest-box I install is successfully used by the target species, but scaling the trees to see cockatoo chicks inside 4 out of the 5 boxes that I hauled into place just a few months ago brought tears to my eyes! Although there are many who believe Endangered species should not be encouraged to breed in the metropolitan area, mostly because of the high number of birds suffering injuries from vehicle collisions, it is my opinion that nesting in such close proximity to high densities of humans creates vital opportunities to engage people in its conservation. A huge reason Ngolyenok populations continue to decline is the ongoing loss and degradation of their habitat, something that West Australian's are obviously happy to see go ahead, owing to their lack of care. The more people we encourage to love and then take action to conserve these magnificent birds, the more chance there is of them flying free in the future.
Posted by Simon Cherriman No comments: 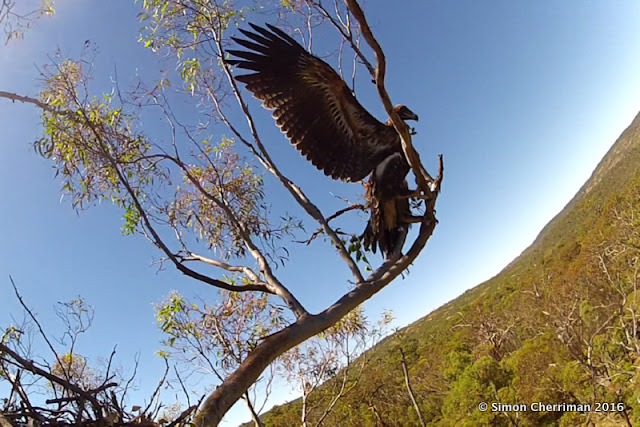 It was an exhilarating feeling looking level with a beautiful juvenile Wailitj / Wedge-tailed Eagle as I attempted to capture it on its eyrie in the Perth Hills today, taking in the vast view behind it and yet again absorbing the domain of an eagle from high in the landscape. I watched in amazement as the eagle 'branched' away from me and proceeded to fly from the nest tree, then glide down and land among Sheoak trees across the gully. A few minutes later I was hand-capturing the eagle on the ground, where it was held calmly and quietly for processing.

This bird was named 'Walyunga', after the National Park in which he entered this world. He received the fifth (and final for this year) GPS/Satellite Transmitter to be deployed on a juvenile Wedge-tailed Eagle. Click here to read more about this adventure! 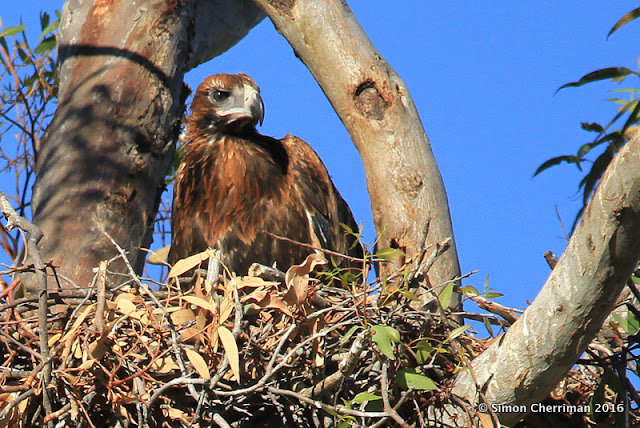 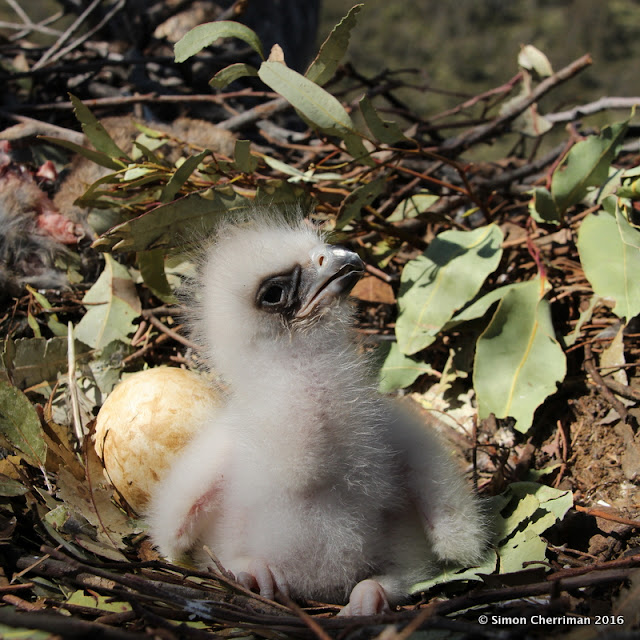 The rapid growth of Wailitj / Wedge-tailed Eagle nestlings never ceases to amaze me. The above photo was taken in mid-September, when one of the Perth Hills nest sites I regularly monitor celebrated the arrival of a new nestling. This discovery was particularly exciting as the eaglet's mother, a 'new' immature female, was first recorded on this territory in 2015 and this was her first ever breeding event! In this photo the eaglet is only 2 days old, and has hardly a hint of predatory bird about it.

One day short of being a fortnight old, this eaglet had more than doubled in size, but still maintained its white, fluffy appearance: 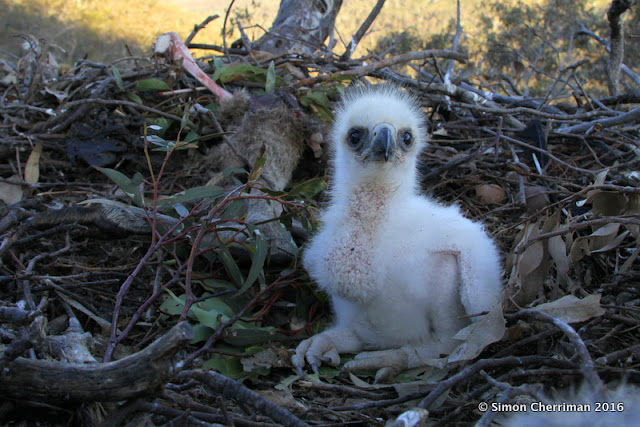 Nine weeks later, however, the same bird had made a rapid transformation, and at 65 days old, possesses the powerful wings and piercing stare of a formidable hunter. 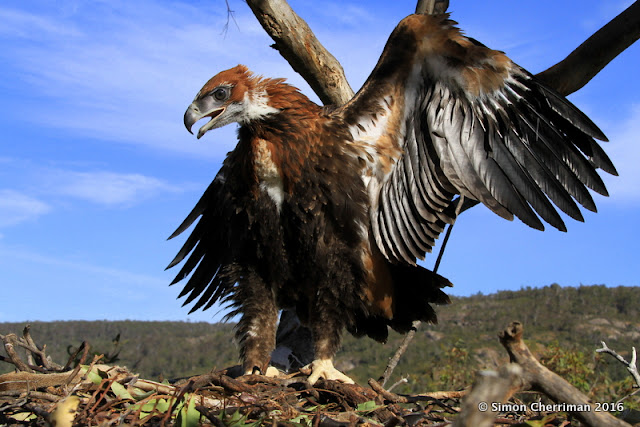 This photo was taken early last week when I visited the eyrie to check the bird was fit, healthy and suitable for satellite-tagging. Two days later I was extremely excited to return with my PhD supervisors Trish Fleming and Jill Shepherd, members of Murdoch University's Animal Ethics Committee Moira Desport and Margot Seneque, who have been wonderfully helpful in assisting me obtain the appropriate approvals for my research, and Parks and Wildlife ecologist Geoff Barrett, to fit a satellite transmitter. It was a thrill to be out bush on a fine, sunny Kambarang (spring) afternoon with an enthusiastic bunch of fellow conservation-minded scientists, and share the sights and sounds of an eagle site that I have visited annually since first discovering it 12 years ago. After a short hike through some beautiful open Jarrah forest, we began the scramble down slope into the rugged Helena Valley, wading through shin-scratching patches of granite heathland and peering past the canopies of wonderful Wandoo trees. Soon we were looking onto the eyrie, where a beautiful juvenile Wedge-tail, three days shy of turning 10 weeks old, sat sunning itself. 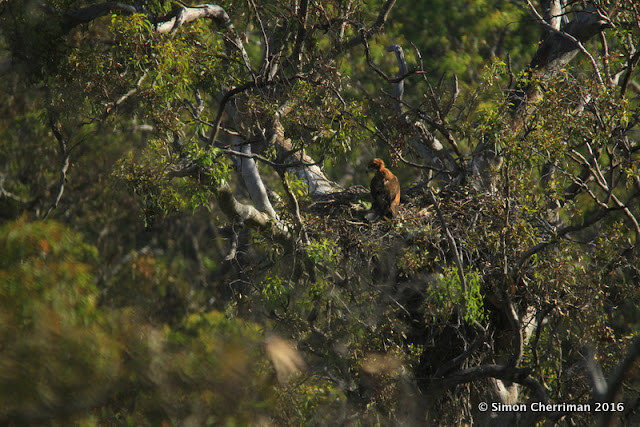 It wasn't long before I was scaling the nest tree and lowering the juvenile male eagle down in a handling bag to Jill, who held him while I took measurements, applied leg-bands and fitted the Platform Terminal Transmitter (PTT). To continue the theme of using Noongar names for all satellite-tagged Perth region Wedge-tails, and to use a name relevant to the area in which this eagle hatched (Kalamunda, which is also the Shire in which I hatched 32 years ago!), I decided to name him 'Kala', which in Noongar translates to 'fireplace' or 'home/hearth'.

When the transmitter attachment was complete I re-climbed the nest and hauled the handling bag aloft, taking care to ensure its precious contents remained unharmed. Placing Kala back on his nest allowed me a quick glimpse of a recently delivered prey item, a large Karda / Gould's Sand Goanna (Varanus gouldii), whose leathery skin had been partially torn open and some of the head and torso consumed. It was great to know the eagle would have ample food until the next morning, when his father would likely be delivering another vertebrate from the surrounding ecosystem as breakfast. As deep shadows gradually engulfed the valley, we hiked back up the slope and across a large slab of granite, marvelling at the sight of Kala's parents who hung overhead, riding the gentle westerly wind with ease. They had no doubt been watching our every move from the heavens, and I felt excited to know we would soon be able to satellite-track their son when he first soared up to join them.


Today, about 77 days after he entered this beautiful world, I returned to Kala's eyrie to see how he was getting on. Looking level with the nest from a steep slope behind it gave me a good view of the eagle's back, and I was able to see straight away how he had now preened the harness into his body feathers, which made the PTT sit comfortably between the shoulders, partly shielded by scapular feathers and almost invisible. Photos of newly attached PTTs can create a skewed perception of how seemingly large and heavy these devices are (they are actually relatively small and only weigh 70g), so it was great to be able to capture a few images of a 'settled in' transmitter, which accurately reflects how it looks on the eagle after it is released.


As I walked down towards the base of the nest tree, Kala hopped over to the edge of his eyrie, glancing back at me, forward across the valley, then back at me again. I decided to sit and watch, fully aware that my presence had prompted this evasive behaviour, but eager to observe him for a few moments and see if I could guage how close he may be to that first big moment. I was transfixed at the scene in front of me. Kala continued to head-bob, looking across the valley, and shuffling as gentle gusts of wind attempted to unbalance him. Suddenly he leaned forward and launched onto a large limb, then clambered up and away from the eyrie, continuing to survey the valley scene before him. My anticipation grew. The nest-tree glowed in magic light from the season of Birak's first setting sun. 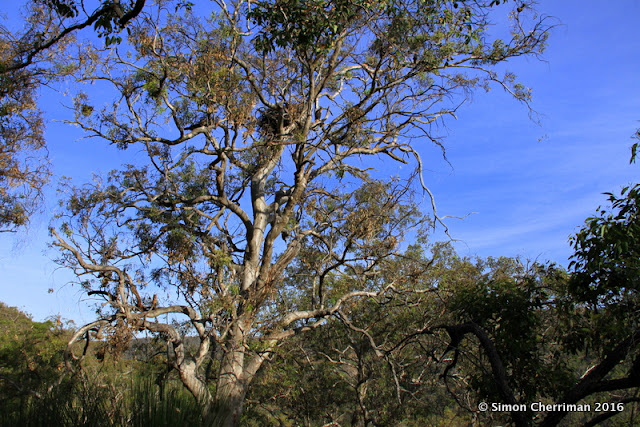 Another gust of wind, slightly stronger this time, prompted Kala to partly open his wings, still shuffling on his legs, but gripping firmly with his mighty talons. More head-bobbing. Then another leap forward, this time onto an even thinner branch that probed out into the valley, placing him further away from the eyrie. I could feel the eagle's keenness to fly. I knew if I turned around to walk away, I would miss something special. More peering across the valley, like a nervous human waiting to take the plunge on their first ever bungee-jump. Then suddenly, with one last glance back at me, he stared forward at an unknown point on the hill opposite his eyrie, leaned forward, squirted a jet of white back at the nest tree, then spread a mighty wingspan against the open air and threw himself at it. A faint sound of several powerful wingbeats reached my eardrum, and Kala sailed downwards and outwards, disappearing behind some foliage. This was it. Kala was airborne!

Kala is the third juvenile Wedge-tailed Eagle to be satellite-tagged in the Perth Hills this year. More information about the others, and their progress, will be uploaded as it comes to light. 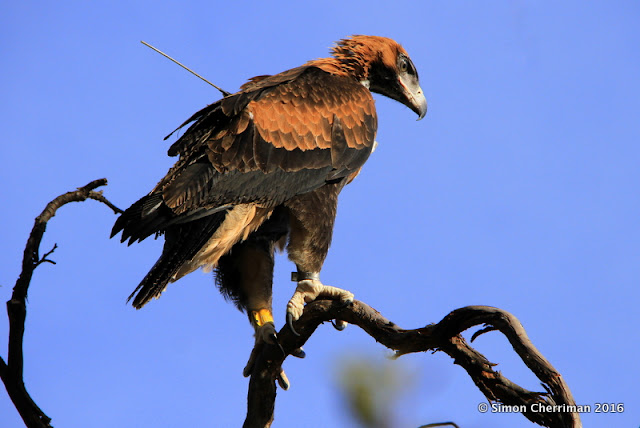