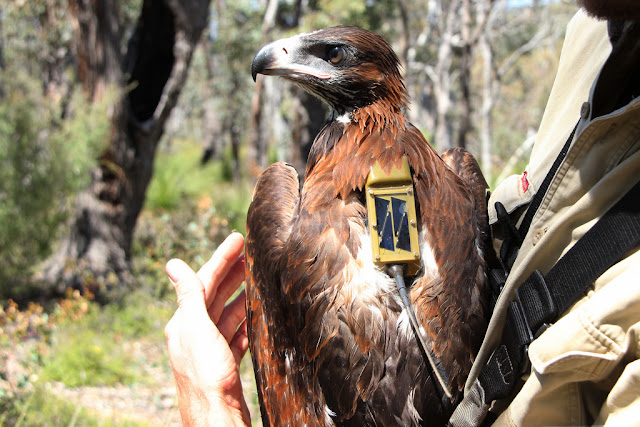 Last month I had the privilege of taking a small group of people to visit a beautiful eagle eyrie in a remote part of the Perth Hills. This included Jo Manning from Murdoch University's public relations department, and Thom and Darrell from Channel 10's 'The Project', who (very excitingly!) were tagging along (pardon the pun!) to film some of my fieldwork to fit a GPS/Satellite transmitter to a juvenile Wailitj / Wedge-tailed Eagle. The bird I managed to catch on his nest was a very calm, placid young boy, who was given the name 'Djoorabiddi' by Noongar lady Alison Murphy. This word is derived from 'djoorab' = good natured/happy, & means 'go foward happily'. Alison's father Noel last year named my beautiful Parkerville eagle 'Yirrabiddi' (path/journey in the sky), so it was truly magic to have a journey theme connecting these two Nannup-derived names!!

The story of how we fitted Djoorabiddi with a satellite transmitter was played last night on the Sunday Project, who kindly gave me the below copy to post here. This clip features some stunning aerial footage shot by my friend Andrew Moore, who expertly showcases the Aerial Environment in which these majestic eagles dwell. Keep your eyes on the Wedge-tailed Eagle Tracking website for updates on Djoorabiddi's progress, and the movements of other juvenile Wedge-tails from the Perth Hills and further a field. Enjoy! 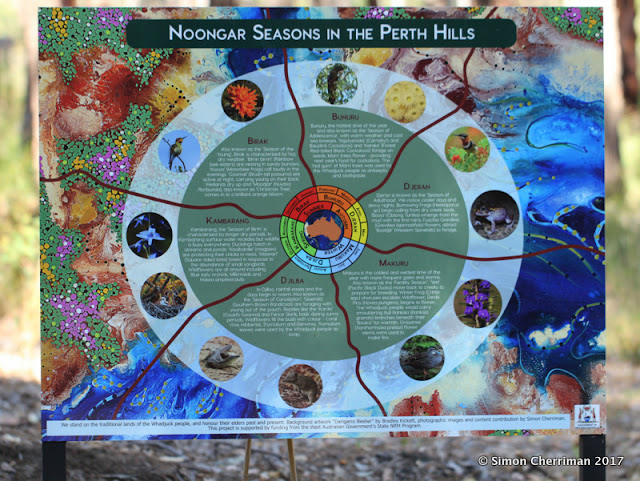 Today there was an official celebration of the completion of Sawyers Valley Primary School's Nature Play area, a project which has been coordinated and delivered by the school's Natural Resource Management team, thanks to a State NRM grant. I've been privileged to be part of this project and participated in recording local fauna, taking guided walks for students and parents, and contributing photographs for interpretive signs that emphasise the area's cultural and environmental values. It was great to see the above Noongar Seasons sign installed today (just in the nick of time before the project finished!), which featured a variety of photographs of Perth Hills wildlife from my photo gallery. Thanks to the NRM team for the invitation to be part of such a great environmental initiative.
Posted by Simon Cherriman No comments: 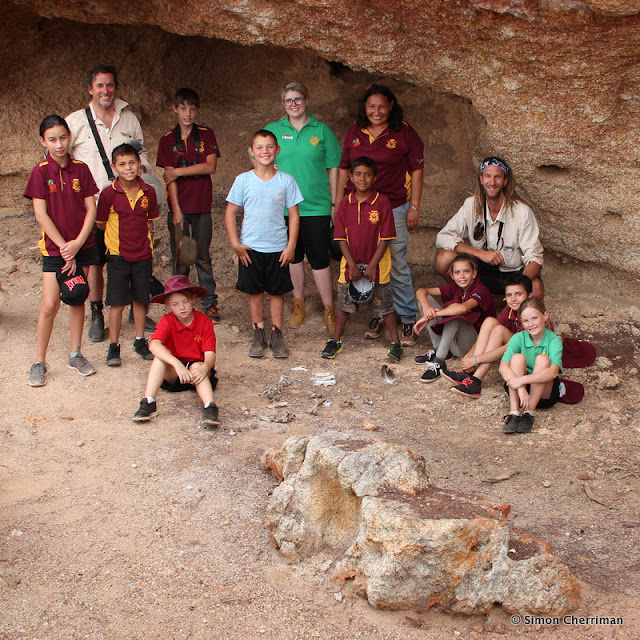 I've just returned from WA's Goldfields region where I completed the arid zone component of my Wedge-tailed Eagle Tracking research for 2017, satellite-tagging two more Matuwa-born Wedge-tailed Eagles. After this fieldwork had been completed, I was very excited to drive south and spend a day on country with a group of Leonora District High School students, an environmental educational activity arranged by the CSIRO's Science Pathways program. We found five eagle nests along some stunning breakaway country that I was privileged to be shown by teacher Fifi Harris. My friend Dave from CSIRO made a wonderful short film about the day which you can watch here. Also, local ABC radio presenter Rachel Day phoned while I was in town to chat about eagles - you can listen to the audio of the interview by clicking 'play' below.

What a busy week out bush it was! Now back to the desk to catch up on all the admin... 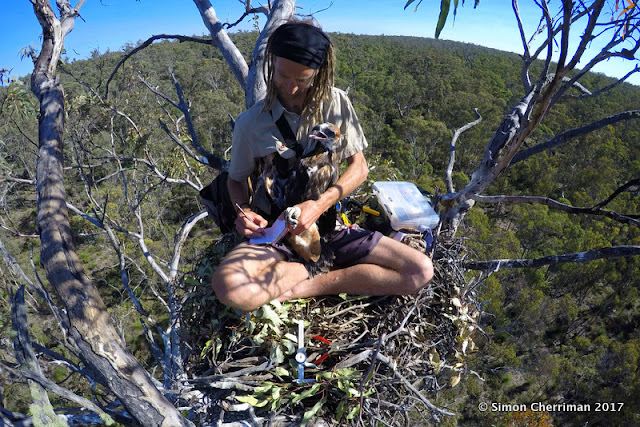 Born on one of the highest Perth Hills Wedge-tailed Eagle eyries that I've ever had the privilege (or punishment!) of climbing, the female eaglet I am holding above was one of 18 that were captured and marked for my research this year. When I fitted her rings/bands and took measurements earlier in the season, I left a climbing rope in place in order to be able to access the nest again, and yesterday the time had come to do just that, to fit her with a GPS/Satellite transmitter. This particular transmitter was sponsored by Tronox, a titanium company operating on a mineral sand mine just north of Perth. I have fond memories of visiting the 'Cooljarloo' mine for fauna survey work with Bamford Consulting Ecologists, not long after I finished uni over ten years ago. Connections were again forged with Tronox through Bob Huston from the Department of Biodiversity, Conservation and Attractions, who has provided amazing support for my eagle research in recent years. Together with property owner John Ffarrington (who kindly gave me access to search for eagles on his Gidgegannup land), Ieva Tomsons from the Toodyay Herald newspaper, and my dear Dad (who was yet to experience an eagle banding activity), our little 'tagging team' set off on a fabulous Noongar Country afternoon to deploy the transmitter.


After scaling the very tall Wandoo nest-tree and lowering the eaglet down in a handling bag, it was time to fit the transmitter using the 'backpack' mount method I learned from friends and raptor researcher mentors Ewan and Jenny in Scotland. I was very fortunate to have my friend and fellow environmental scientist Andrew Moore along to help by holding the eagle, who turned out to be quite a handful!


Although she had been fitted with a falconry hood, which normally blinds (and subsequently calms) the bird, this eagle must have been able to see through a crack in the eye slots, as she persistently bit my hands and fingers while I carried out the attachment procedure. The main concern when handling eagles is their powerful talons, which in juveniles are pin-sharp, and together with extremely powerful 'ratcheted' toe/foot muscles, can inflict severe injuries. The bill is more of a 'tearing tool' and has far less power than a foot, but it does have a very sharp tip, useful for tearing apart kangaroo flesh, so it can still hurt!


Fortunately Chris Bean from Tronox, who had been taking many wonderful photos of the occasion, stepped in to calmly support the eaglet's head which eased the beak-attacks on my hands! I could then carry on with the fitting the harness in relative peace.


After about half an hour of fine-tuning the transmitter harness fit, stitching it with a 'weak link' that will eventually fall off with natural decay, and taking a few updated measurements of the eagle's wings and feet, it was time to return her to the nest. I ascended into the canopy, gently removed her from the handling bag, and she hopped out in a slightly frustrated manner, but seemed relieved to be free to move about again. 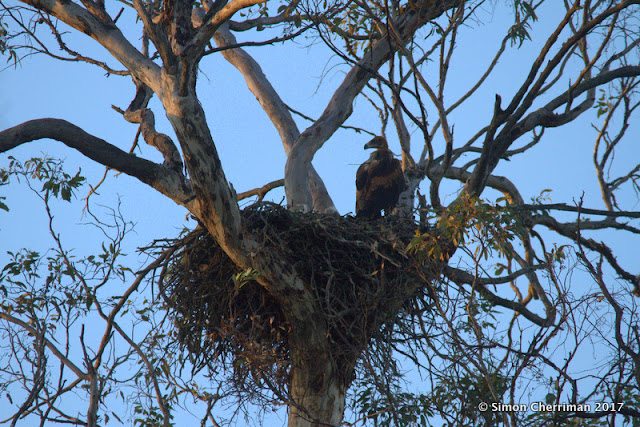 Looking back at an eyrie and seeing a young Wedge-tailed Eagle safely back 'home' after it has been marked for research, and knowing we will be able to follow its journey, evokes a very unique feeling in me. It is mainly one of excitement and intrigue but also satisfaction (especially after such an adrenalin-induced tree-climb!) and a very strong element of concern for the bird, knowing it will soon leave the safety of its nest and venture further out into this dangerous world.


Although I'd been bitten by eagles quite a few times before, I certainly hadn't experienced a bird who bit so persistently, and this behaviour prompted me to suggest the name 'Baakininy', which in Noongar language means 'biting'. I was very pleased that Chris and the Tronox team also thought this to be appropriate. While I haven't traditionally been into naming wild animals, I believe it is important as a scientist to create an identify for the individual animals we are researching, particularly those whose progress we are able to follow in the close detail satellite-tracking allows. As an ambassador for Australia wildlife, the ecosystems of which it is a part, and the ancient cultural connection that Aboriginal People have shared with this amazing landscape, I have chosen to use indigenous language (Noongar in South-west Western Australia, and Martu in the Wiluna area) for Wedge-tailed Eagle names, because I feel it serves to remind us that these animals have been observed by people for thousands of years. These people are in some places in danger of losing their cultures, which are intricately linked with the lives of native animals and very much on the same page as 'western' values of biodiversity conservation (modernly referred to as 'Caring for Country'). Of course, such languages may provide us 'whitefellas' with new pronunciation challenges, but learning anything new always seems more difficult at first, and what better way to continue the use of an ancient language than by speaking out loud names given to charismatic, majestic birds of prey!?

The day was an extremely memorable one, and I am so grateful to all those who took part for their support, assistance and encouragement. We'll be excited to watch Baakininy's progress with eagle eyes!