You're a Dead Duck 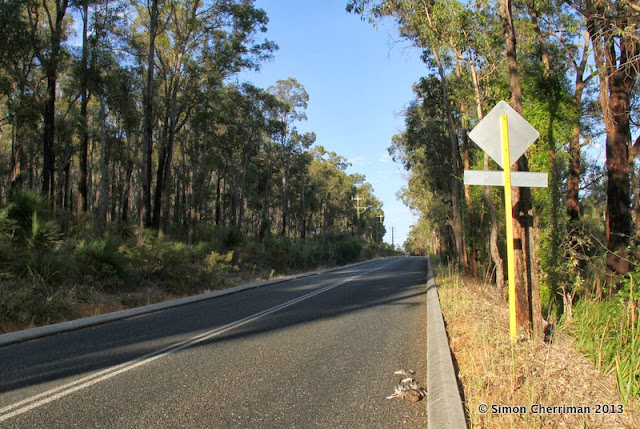 This is a familiar spot to anyone who lives in the Mundaring Shire - it is the section of Riley Road, just west of the Stoneville Road roundabout. Today I was horrified to drive through the roundabout and find some dead animals one the side of the road. Note that they are on the northern side, which, if you are in a car and heading east, you have to start to slow down for a roundabout right where the yellow sign is. Check this out: 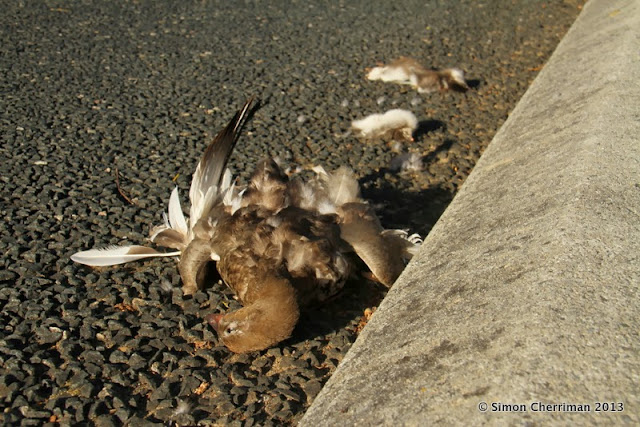 This is the first victim, a female Australian Wood Duck who has been squashed by a car, which supposedly should have been slowing down for the roundabout. But if you  look closer, you can see than whoever hit her also killed three of her day-old ducklings. 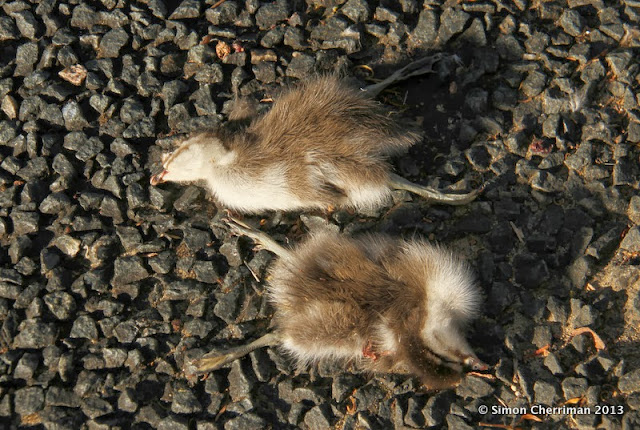 Later that same day, I drove back along this stretch of road and found a dead female Quenda or Southern Brown Bandicoot. She was also not the soul victim. Hanging from her pouch were 2 partly furred babies, both stone cold dead, having clearly not been able to make it when they tried to flee their mother's cold body. The family had been killed in broad daylight in a 50kph zone.

This story is chilling and sends a simple but strong message to people living in the bush:

WATCH THE ROAD and SLOW DOWN FOR WILDLIFE
Posted by Simon Cherriman No comments: 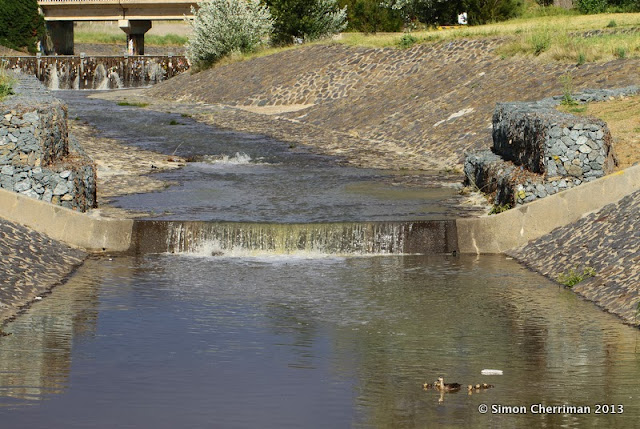 This great little wetland (a delightfully concreted urban drain in Canberra) is home to a surprising array of wildlife, so I found recently. The attempt at preventing erosion by concreting the banks and building large rock walls held in place with wire mesh framework (and I say 'attempt' because downstream of this photo the banks are totally washed away by storm-water flooding!) has actually been quite beneficial to one species in particular. Here it is... 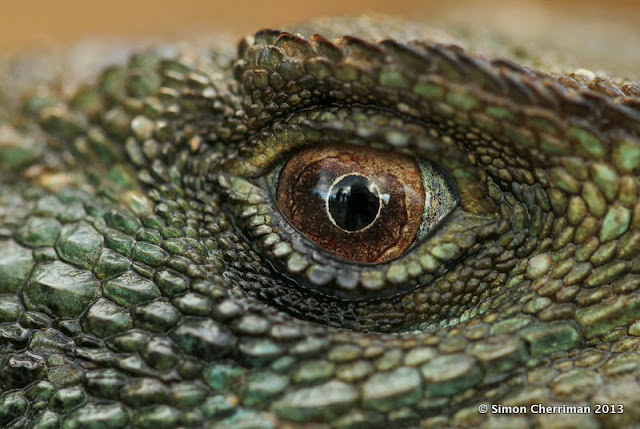 No - this eye doesn't belong to a Tyrannosaurus rex!!... although its dinosaur-like appearance is a clear indicator of the ancient ancestors from which this creature evolved. It is in fact the eye of a Gippsland Water Dragon (Physignathus lesueurii howittii), one of the large, semi-aquatic reptiles found in eastern Australia. These native lizards are named 'dragons' because of their resemblance to the creatures of Chinese mythology. Here's a wider view of one: 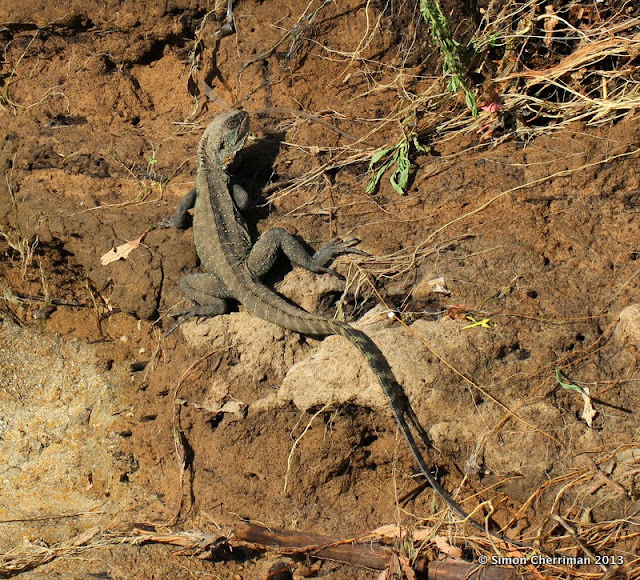 You can see the 'dragon-like' features which include thick, leathery scales, a spiky 'mohawk' (which is actually a row of pointed scales running down the centre of the neck, referred to as a 'nuchal crest'), and long, powerful legs equipped with sharp claws which make these lizards adept climbers. It's hard to get any sense of scale from the above image, but they can grow to a metre long, and weigh up to 1kg!

Water dragons are excellent swimmers and while walking around the drain I often head a 'plop' then saw one motoring across the surface of the water. Water travel is made easy with a thick, paddle-shaped tale, which is dorsally compressed (a scientific term meaning 'squashed in from the sides') and makes up about two-thirds of the body length. Sometimes they dive straight under and can remain submerged on the river bed for over an hour! When emerging from their watery hiding place, the wire mesh walls on our Canberra drain give them excellent grip, and the rock is a perfect place to bask, especially when carpeted with blankets of golden sunlight during the late afternoon. Being 'solar-powered', all reptiles rely on an external source of heat to fuel their metabolism, so scanning rocks and logs while walking is a good way to tune into lizard spotting. This smaller female dragon (noticeably greener in colour than the male pictured above, and with less bold markings) was half way through shedding her skin, and allowed me to crawl quite close for a photo. There is something refreshing about seeing the old skin peel off and make way for the beautiful new scales underneath. 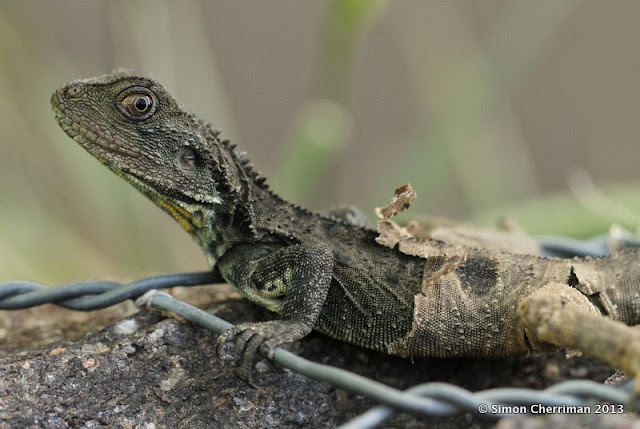 Ok... let's finish with a challenge. Spot the dragon! Here are four photographs taken along the creek banks at our Dragon Drain, each one with a dragon hiding. Can you spot them all!?
(Click on each image to make it larger). 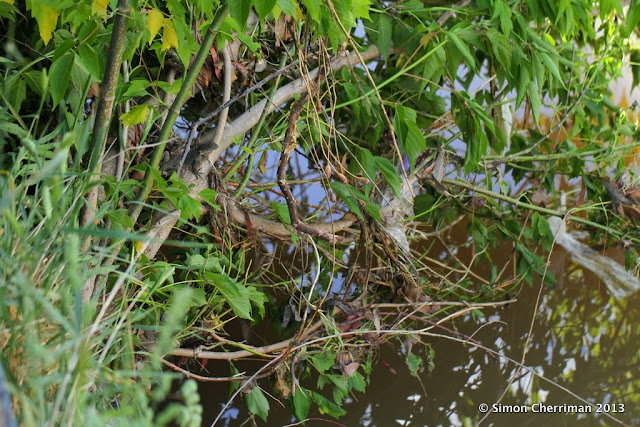 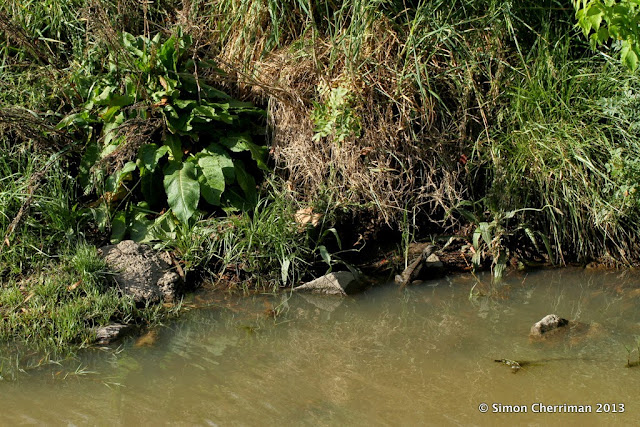 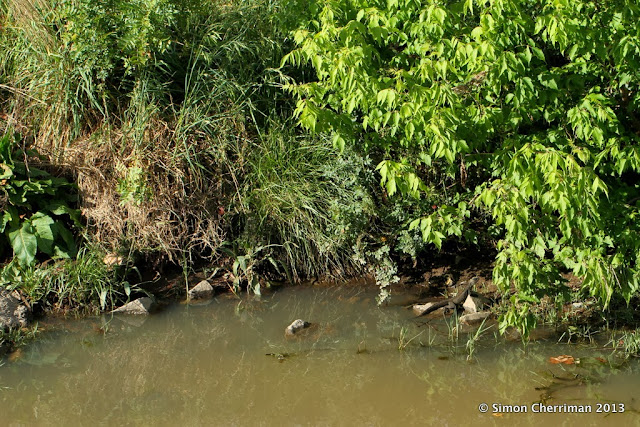 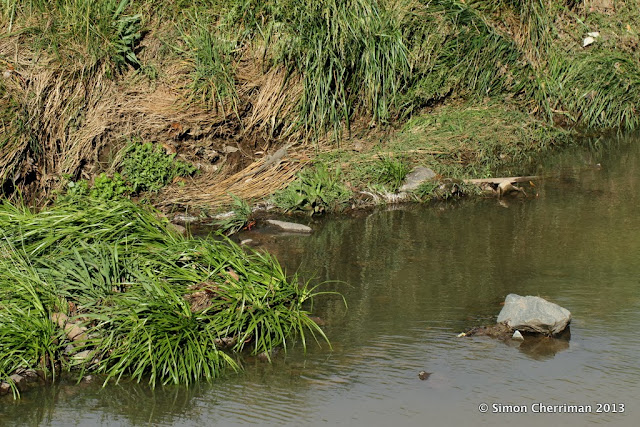 Creatures of the Dam 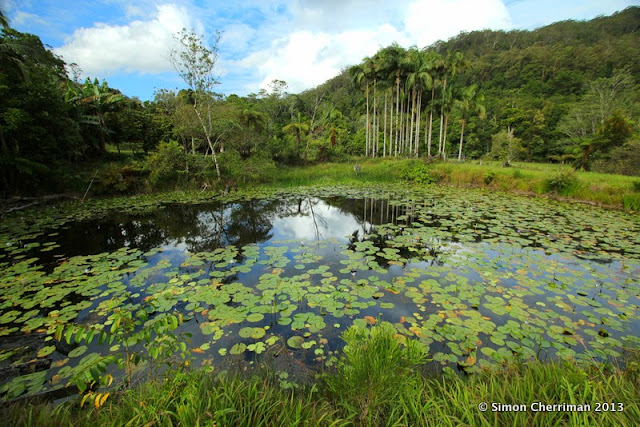 This beautiful water, decorated with water lilies and surrounded by dense reeds on some of the banks, makes up part of the picturesque scene below the verandah of the house where I'm spending a few days near a place called The Channon, in north-eastern NSW. Looking at the perfect reflections which shimmer on a flat surface which resembles a giant piece of glass, the dam gives the sense that nothing is moving. However, as I've found out over the last few days, there is always plenty of wildlife hiding away in such areas. Check out these amazing creatures!

These Hardheads, or White-eyed Ducks (Aythya australis) have landed on the dam for each afternoon. Initially I thought they were a pair, but looking more closely you can see they both have white eyes, making them males - females of this species have a brown iris. 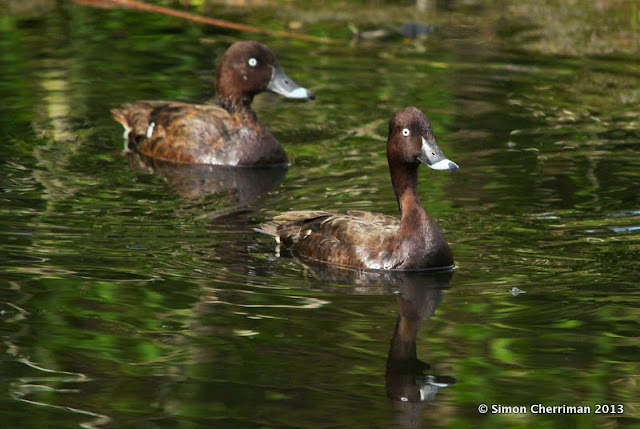 Late one afternoon I was really lucky to see one of Australia's most iconic yet cryptic animals - a Platypus! European settlers first thought this amazing animal was a hoax because it was a mammal with a duck's beak that lived in the water. Platypus live in freshwater streams, diving beneath the surface and using special electro-sensors in their bill to detect creatures like crustaceans and small macro-invertebrates. They surface every so often and raft around on the water before diving, giving anyone who is looking a sneaky glimpse! 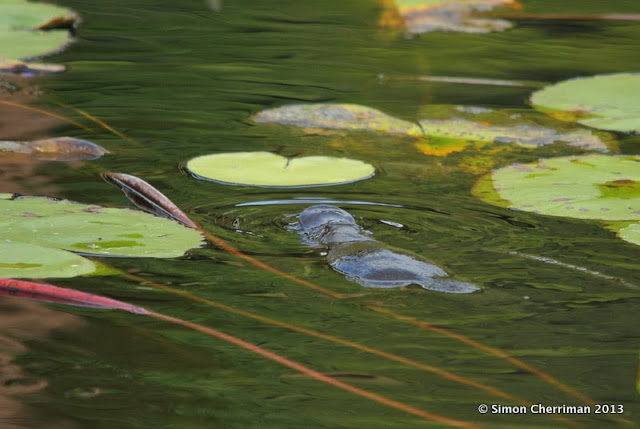 As the sun set a few loud noises started up at the pond's edge. Investigating with a head torch and listening carefully, I managed to find the culprits - two species of tree frog which were calling loudly to attract mates. The first one only reaches 3cm in length so was hard to spot among the thick reed stems, but eventually I snapped a photo. Meet the Eastern Dwarf Tree Frog (Litoria fallax):

The second species was much louder and also larger, making it easier to spot with a head torch. Another tree frog, as evident from the large discs on the end of his fingers which are very useful for climbing, sat on a large tree stump giving off his whirring song. This one turned out to be a Peron's Tree Frog (Litoria peronii), a common species of the south-east. You can just make out the yellow pattern between his fingers - this was even brighter along the linings of their legs. 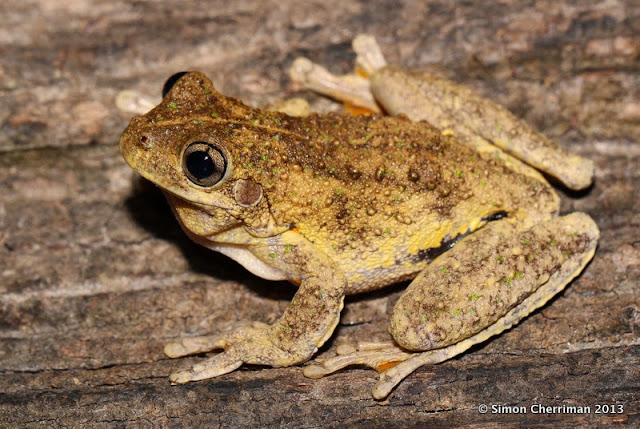