To Film a Sea Eagle 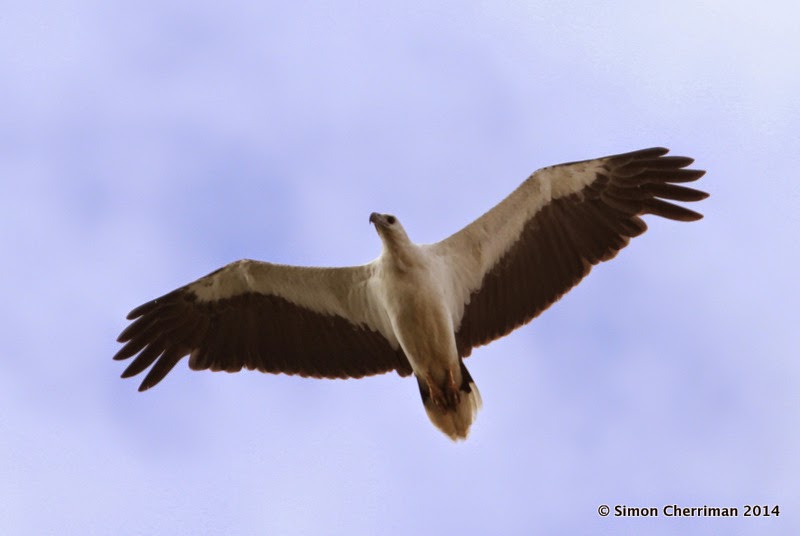 When you're looking for an active sea eagle nest to film, Singapore's small size could lead you to believe that this might be an easy task, especially when the locals have already lined up a few nests for you. However, an earlier than expected breeding season and a few storms causing some nests to be blown down before the eggs hatch will soon make the job a bit more difficult, so I found out over the last few days.

I arrived in Singapore on Monday night and spent Tuesday and Wednesday with a local film company (Beach House Pictures) doing reconnaissance drives to find a White-bellied Sea Eagle nest that would be suitable to obtain natural behaviour shots. They brought me in as a 'specialist eagle cameraman' so I had the task in front of me to deliver! The first nest we reached had blown down, and the second was empty despite a pair of birds being observed roosting near the nest on regular occasions. Viewing the empty nest cavity was more difficult than I envisaged and had me performing one of the most difficult tree-climbs I had ever experienced. This nest was about 40m up a rainforest tree and the leafy vines covering almost every branch were, unbeknownst to me, the perfect home to hundreds of little red ants. I met a handful of these insects while climbing the first 5 m, but didn't realise how much of a problem they would become, with the real numbers becoming apparent as I got about half way up. Literally armies of the things used every means possible to climb onto my skin, including running directly along my safety ropes (which were akin to the natural vines on which the ants were used to travelling) and using them to access my chest and legs. The occasional bite or two quickly became dozens of bites per minute and after reaching and quickly photographing the eagle nest, I found myself frantically rearranging ropes to rig an abseil to the floor, all the while scraping masses of ants from my limbs in an effort to minimise the bites. This army truly was unstoppable!


When I finally zipped down my line and felt my feet touch solid ground, film crew members Claire and Syaf rushed to my assistance. I stripped off faster than Superman in a phone box and as my heart-rate gradually eased I picked the remaining ants from my sweaty skin. That was an experience I don't wish to have again soon!


Getting back on task, we were driving to a third nest site when Syaf's keen eyes picked out a new-looking nest in a tree adjacent to a building site. We quickly found a parking spot, and, attracting much attention from the local Muslims crowding the streets during prayer time, hauled backpacks bulging with climbing equipment and camera gear and trekked into the small patch of jungle near the nest.

Luck was on our side with this nest as we immediately saw a pair of adult White-bellied Sea Eagles perched next to the nest, and closer inspection revealed an eagle chick peering down at us through some gaps in between the stick structure of its nest. At about 10 weeks of age it was much older than hoped, but it was a chick nonetheless, and I knew it would need to get fed. 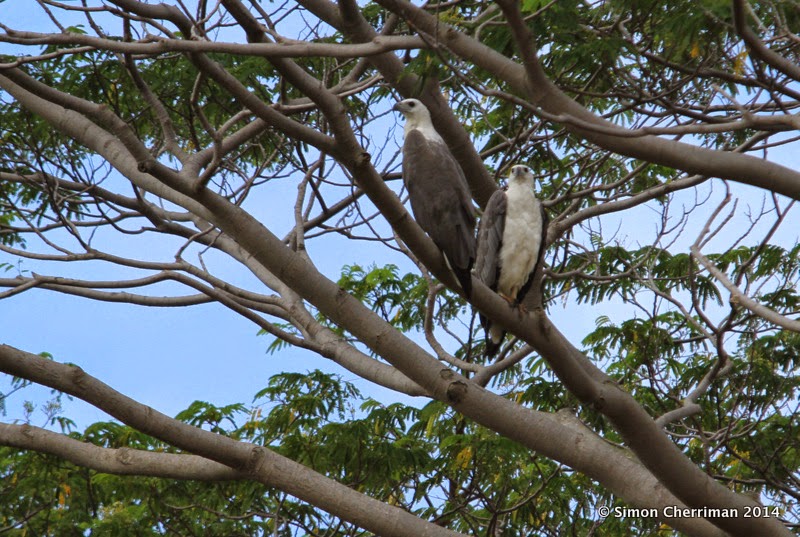 The nest was in a perfect spot for the planned shots, which needed to emphasise the context of wildlife in a busy city. Nothing does this more than a huge raptor nesting next to a carpark in the making! The only problem was, it was in quite a precarious position in one of the most dangerous climbing trees in Singapore - an Albizia, known for their rotten branches - and there were not many other nearby trees suitable for me to build a hide in. We earmarked the site and continued on for the rest of that Tuesday, and most of the Wednesday, scouring Singapore for sea eagles with an active nest. Wed didn't find another - it seemed that all other pairs had fledged their chicks already.

Today we returned to this nest and, after climbing the one neighbouring tree that was suitably high enough to gain a good view of the sea eagle chick, I began work on a tree platform. Claire, Syaf and Scotty from Beach House assisted with hauling materials into the canopy. A green 2-person tent worked perfectly as a hide and blended in nicely with the surrounding canopy after being camouflaged with leaves and vines. It took much of the afternoon but eventually I had a good view of the nest tree, the eagle nest and its construction site setting, and was ready to film. 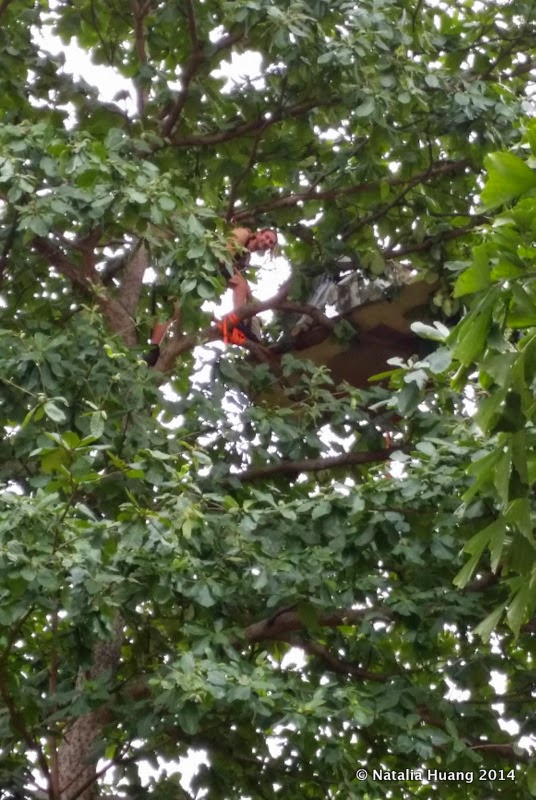 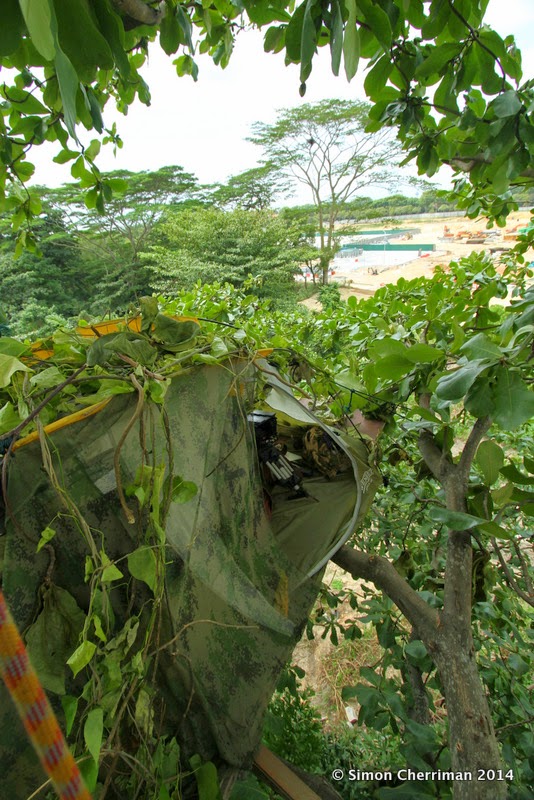 You can see the hide in the foreground of the above photo (left), with the eagle nest behind, and the cheeky monkey entering his hide! (right), high up in the crown of a walnut tree (click the images to enlarge). I would spend much of the next three days in the hide and manage to obtain some exciting shots of the female eagle landing with fish for her chick. It was very hot and humid in the hide, and I gulped down the water during long periods of eagle inactivity. Strong winds made shooting very challenging indeed, but such conditions did prompt the eaglet to perform plenty of flapping practice for the camera, at times launching high above the nest on powerful wing-beats. Where can you see the footage? You'll have to wait until the documentary is finished! It should be announced on the Beach House website after completion in 2015, and if you live in Singapore, you'll get to see it live on TV as part of the 50 year independence celebrations. I will also post an update here when I get the latest. It will be thrilling to have been involved in the making of a wildlife film which will be narrated by David Attenborough. I can't wait! 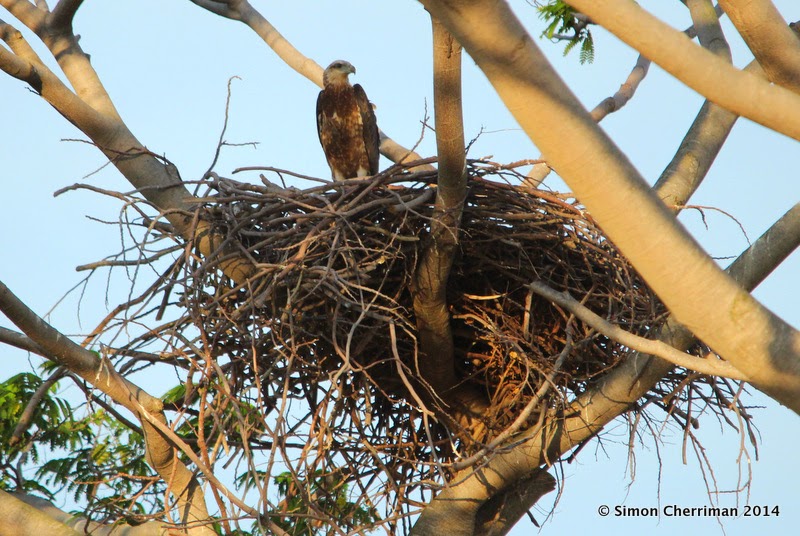