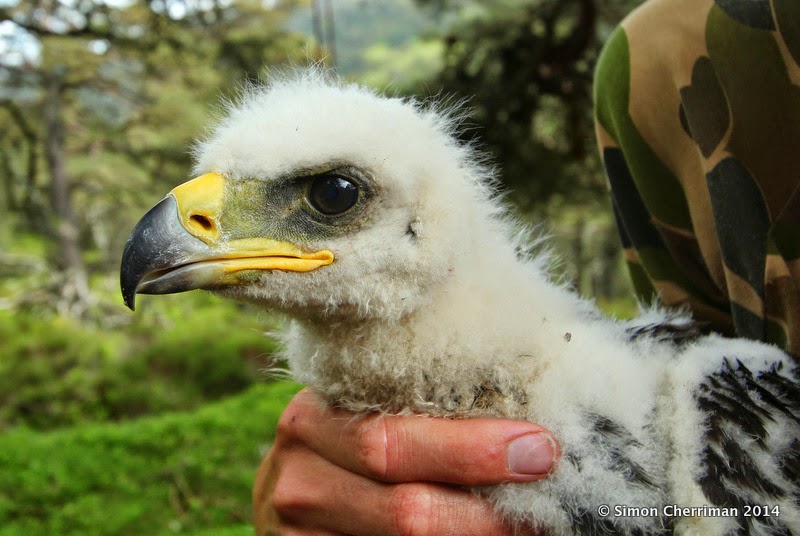 This is a Golden Eagle (Aquila chrysaetos) chick - isn't it amazing!? It is virtually identical to a Wedge-tailed Eagle (A. audax) chick, and this makes sense given the very close relationship between the two species. Here are some stories about my adventures getting to know these young raptors over the past week... 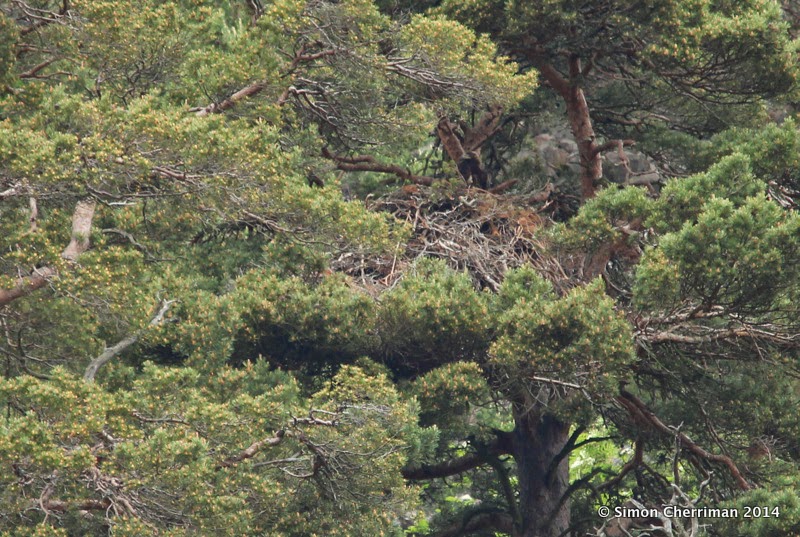 Looking up from deep in a valley to this Golden Eagle eyrie, you can just make out the shape of a female tending her chicks. Her tawny nape feathers, a characteristic feature which gives the species its name, contrast with her darker breast which can just be seen against the bark of this wonderful Scots Pine. I never thought I would get to see an adult 'goldie' at an eyrie as eagles usually flush well before you see them, so being able to spot her briefly from a distance and watch the bird step off and glide away was a spine-tingling experience. 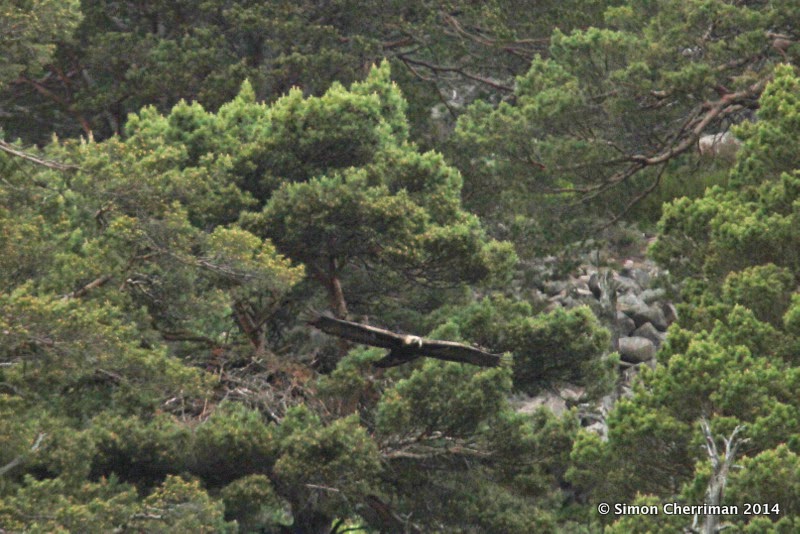 A tough hike up the slope, which prompted my calf muscles to remind me of their presence with every step, followed by a hand-scraping scramble into the canopy of a Scots Pine, gave me this view:


This beautiful brood of twins greeted us on the nest as I climbed to ring them with Ewan Weston, a Scottish ornithologist who has just completed his PhD on the species. Ewan, his partner Jenny Lennon, Stuart Rae and his brother Robert have been conducting various licensed bird ringing projects in north-east Scotland, and I've been tagging along over the last month to gain wider experience in handling and marking a variety of birds, especially raptors.

Eagles are ringed with a standard metal ring (complete with overlocking clasp to avoid a powerful bill from removing it!), issued by the British Trust for Ornithology (BTO). This is placed on the right leg, and Ewan has been using an additional aluminium coloured ring with a unique identification number for hopeful resighting in the field, placed on the left leg and secured with rivets. This method of marking is harmless to the birds and has been tried and tested over many years. Such monitoring is necessary to gain information on the movements and survival of young recruits to the Golden Eagle population which is still heavily persecuted by gamekeepers.


At two other nests we visited, it was very pleasing to find broods of two on both nests, a good indicator that prey across these Golden Eagles' territories is in good supply. At one nest, which was well-hidden amongst Scots Pine foliage and took some finding earlier this year, the chicks were placed in a bag and lowered to be ringed on the ground.


Jenny guided me through the process and discussed the different measurements which are taken, including wing length, bill, hind talon length and halux (the length of an eagle's foot span, from toe to toe). Here you can see how well-developed the toes and talons are, even on a half-grown chick, and get a gauge for their size compared to human hands. The sheer size of these feet indicate it is a female, the much larger sex. 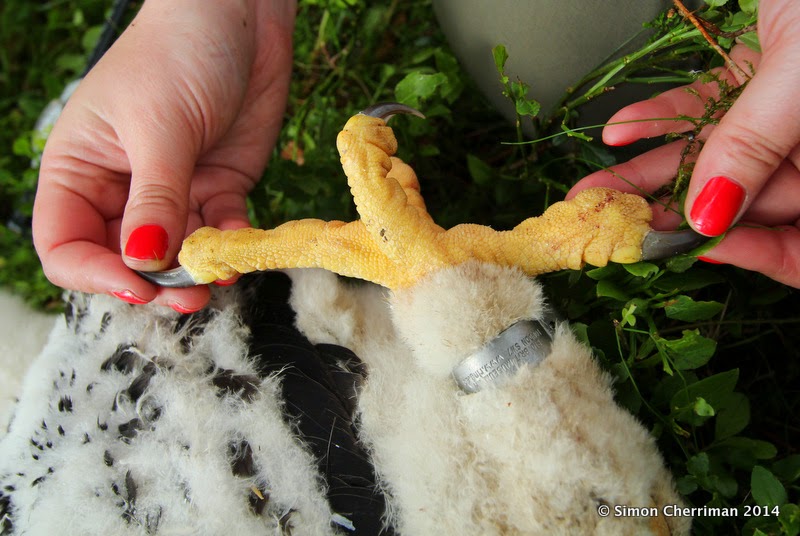 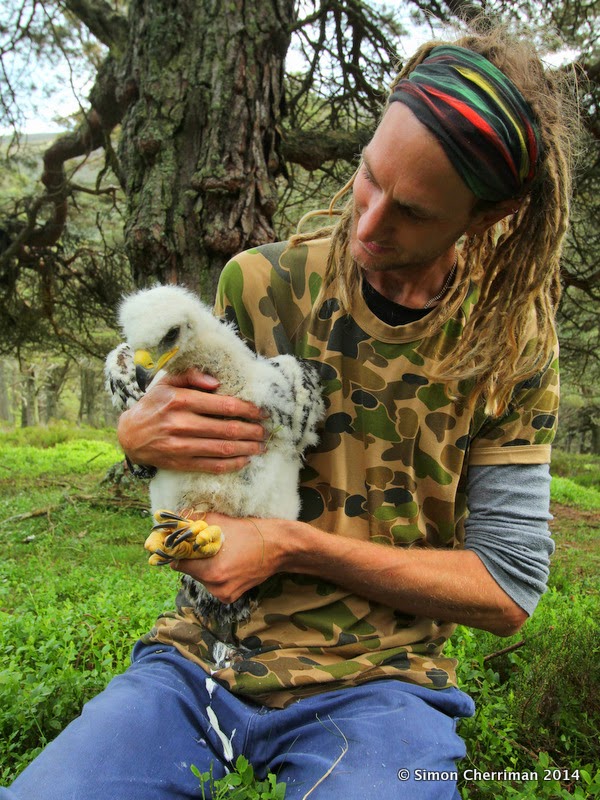 When the chicks were ready to be returned to their nest, I picked up one of them to place it in the hoisting bag, stopping briefly for a quick photo. The eaglet seemed to know it was on camera and had a sudden bout of nerves - leaving me with a very white wet-patch that soaked through three layers of clothing and (according to the old wives tale) left me with plenty of good luck! This 'goodbye gift' ensured the experience was certainly something I will never forget and I felt privileged to have been defecated on by such a wonderful bird!

The good luck certainly held true a couple of days later when we found the third brood of two sat in perhaps one of the most spectacularly placed eagle eyries I have ever seen, a mass of branches stacked heavily in the giant fork of an ancient Scots Pine. It was a hike and a half to reach this eyrie, but my effort of getting to the nest was quickly rewarded by an amazing sight. The bodies of not less than 13 prey animals were piled up at one edge of the eyrie, and at the opposite edge lay the eaglets, slightly damp from a brief morning shower. I have never experienced an adrenalin rush that lasted nearly an hour before, but this magical setting was certainly enough to trigger such a feeling!


This eyrie was big enough to sit on as I set up ropes in preparation to lower the two eaglets to be processed by Ewan, Jenny, Robert and Stuart on the ground. Once the pulley rig was in place, I carefully moved the eaglets, one by one, into a handling bag and lowered them over the edge... 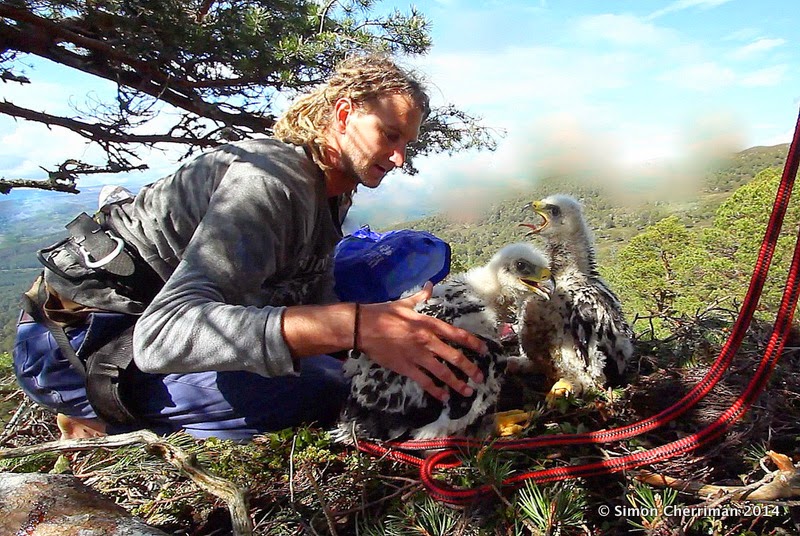 With the chicks at ground level, I was able to take in more detail of the eyrie, and photograph the prey at close quarters. The bright green foliage of pine sprigs and heather showed how often the old birds brought such decorations to the nest, which are used as a disinfectant to reduce bugs and flies, a potential threat to eaglet health. Hygienic practices such as this are especially necessary on nests littered with meat like the one in question! Below you can see how well the carcasses of these grouse and hare have been prepared before delivery to the nest. This is quite common among large eagles - the male, who does much of the hunting, often eats the head and forequarters before carrying the rest of the prey animal to the nest. I have seen the same happen at Wedge-tail nests in Australia. 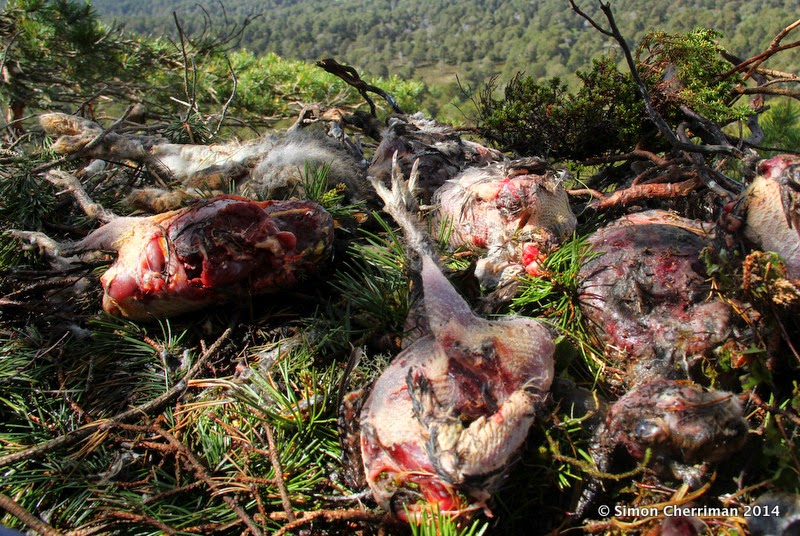 Ringing complete, it was time to hoist the chicks into the tree and place them back onto their eyrie. I did this with great care, making sure both birds were placed in the centre of the nest so they didn't stumble over the edge. In all the years I've worked with eagles I've been constantly amazed at how placid the chicks are, even when you are sitting level with the eyrie (or handling them as I was with these two), and how gentle the parent birds are at feeding them, despite the fact that eagles are formidable predators and could really damage you if they wanted to.

As I snapped a few last shots of the twins on their gargantuan eyrie, it occurred to me that I had just  experienced something very special, and certainly met a pair of wonderful birds that I would never forget. I am so grateful to my companions for taking me into their world, the domain of the highland eagle, a truly wonderful creature. 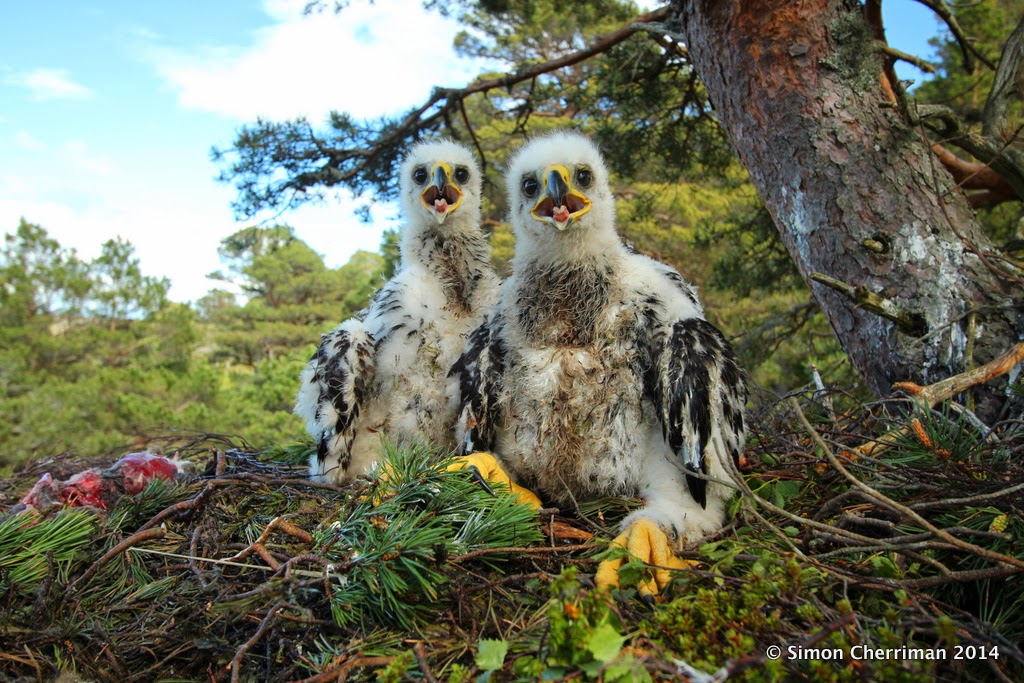