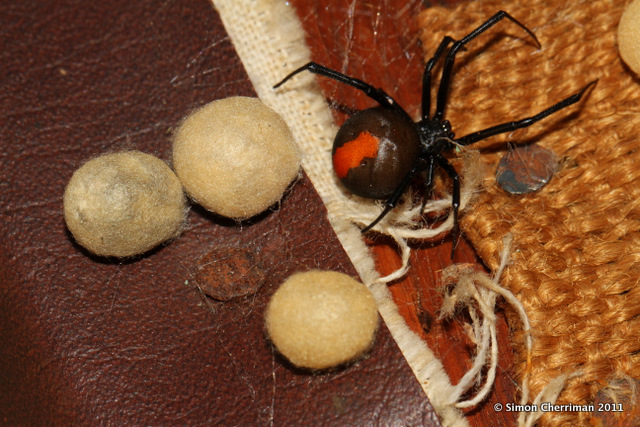 I found this Red-backed Spider (Latrodectus hasselti) underneath a chair that my mum’s friend gave us. Even though I know these creatures are dangerous, I was fascinated to be able to look at it closely and get photos of its egg-sacs, neatly suspended from the leather of the chair’s underside. It made me feel quite alarmed that only yesterday, I’d sat on the chair while chatting to a friend on the phone without even knowing! It also made me think that the spider has probably been in the shed for weeks, happily living its life in there without bothering us.

A find like this often prompts me to do some research and I found out that the female Red-back can store sperm from the male and use it over a 2 year period after mating! Each egg-sac contains about 250 eggs, and the spiderlings take 2-4 weeks to hatch. Only female spiders develop the red markings, they grow much larger than males and can live for 2-3 years. The most interesting fact I read was that since development of Red-back anti-venom, no human deaths have occurred. Reading this made me firmly decide not to squash the spider, but to be aware of its presence and carry on observing it. I might even get some photos of the young spiderlings - how exciting! More information on Red-backed Spiders can be found here.

A visit to my parent’s place the day after had me checking the progress of my wetland seedlings planted around my dam. In a thick shrub I found a large female Golden Orb Spider (Nephila sp.), sitting beautifully in the middle of its web with the tiny male poised just a few centimetres away. What an amazing sight hey! 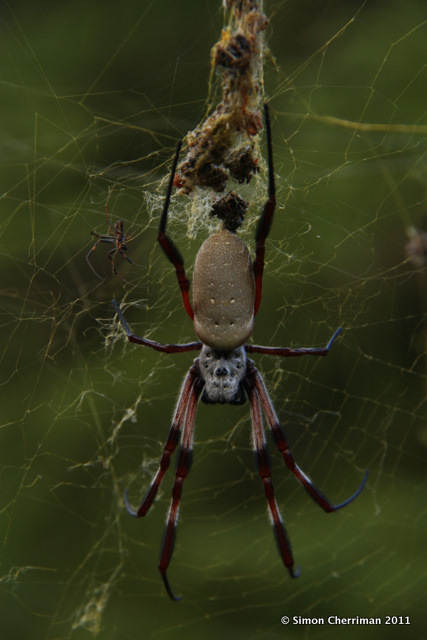 I then noticed another female Golden Orb hanging not-so-delicately in her web nearby, and closer inspection revealed she was dead. Stuck in the sticky silk next to her was a Honey Bee (Apis melifera) with its sting missing, and as I looked even more closely I could see poison-sac of the bee-sting protruding from the spider’s abdomen. In the photo below you can see the bee, and its sting marked with an arrow. Amazing! She had caught a bee and been killed in the battle while trying to wrap it in silk. The first time I’d ever seen this before. Yet another fascinating insight into the natural world. 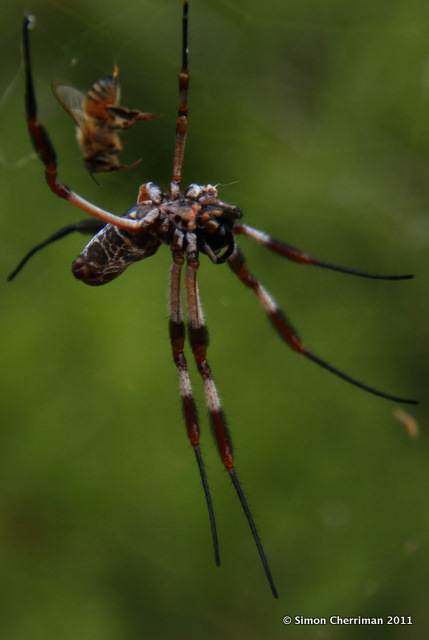