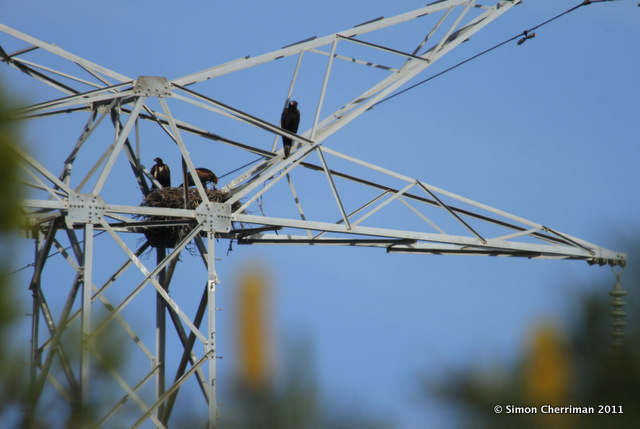 Another southward journey took me past the Pylon Eagles early this morning, but the nest appeared empty. This seemed to confirm the observations of another eagle enthusiast Glenn (who had also been keep tabs on this amazing nesting event) that a young eagle he had seen on the nest has now fledged.

On my way home this afternoon I stopped again to have a better look, and noticed THREE eagles at the nest! Closer observation revealed that two of the eagles were in fact juveniles, being watched closely by one parent as they fed on a fresh kill on the nest platform. This told me that the Pylon Eagles have indeed been successful, rearing two young to fledge for the 2011 breeding season! This behaviour is part of the normal ‘post fledging period’, where newly fledged eaglets remain close to the nest and spend several months with their parents learning how to hunt. During this time, the eagles will often return to the nest and use it as a feeding platform, and sometimes to roost there at night.

I do have records of newly fledged eagles that live close to overhead wires being electrocuted (in fact I still have one carcass in my freezer), as their sometimes clumsy landings lead to wings touching two wires. This really emphasises the fragile balance that such ‘urban eagles’ are living. Let’s hope these two young birds (pictured below) do not suffer the same fate. 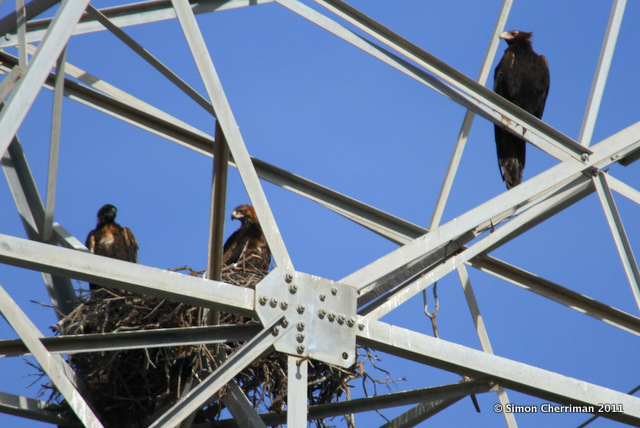