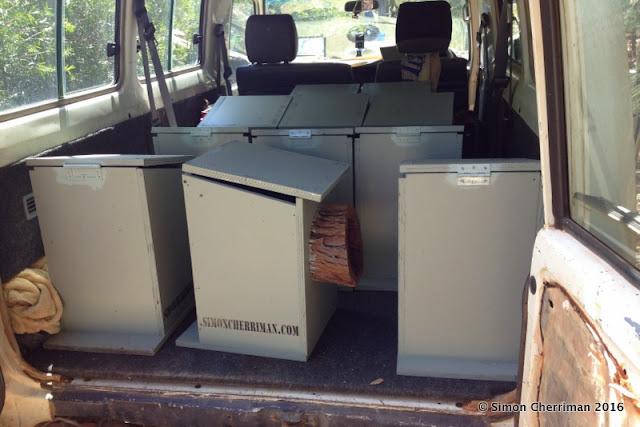 Over the past few weeks I've been lucky to be involved in a nest-box project for my friend Mike Lohr, who is currently conducting a PhD project researching the impacts of habitat fragmentation on one of our most beautiful nocturnal birds, the Gookamit or Southern Boobook Owl (Ninox boobook). Part of Mike's research is looking at the availability of nest hollows, which, in our highly modified landscape of housing estates, parks, cleared agricultural land and farm buildings, are becoming an increasingly scarce resource for many animals.


With diverse native plants and a suite of insects as a potential food source, many patches of bushland at two of Mike's study sites (the Perth metropolitan area and the Wheatbelt region, near Kellerberrin) are potentially suitable to support pairs of breeding boobooks, but the lack of tree-hollows large enough for owls to nest in may be the limiting factor. To test whether the addition of nest-boxes might encourage boobooks to breed at sites where previous surveys have failed to detect them, Mike kindly engaged me to supply and install 30 owl boxes - 15 for each study area. I spent much of January designing boxes, based the measurements of some natural tree-hollow nests from my local area in the Perth Hills, and over the past week it's been great to get out and install them! 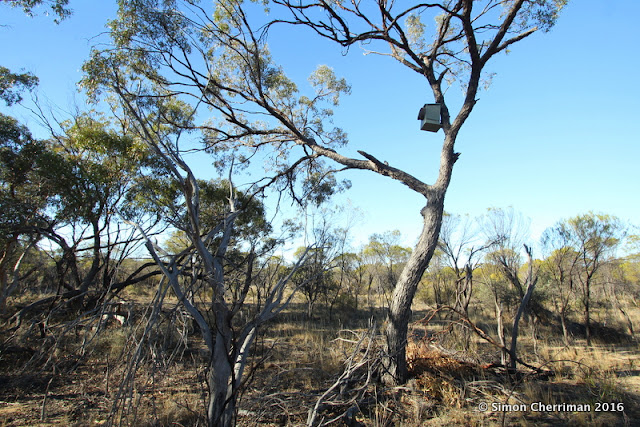 The above photo shows a typical installation site for an owl-box at the Wheatbelt site. This York Gum (Eucalyptus loxophleba), which is only a very young tree and one that will not form suitable owl-sized hollows for several hundred years, has now had its life increased substantially with the addition of a nest-box! 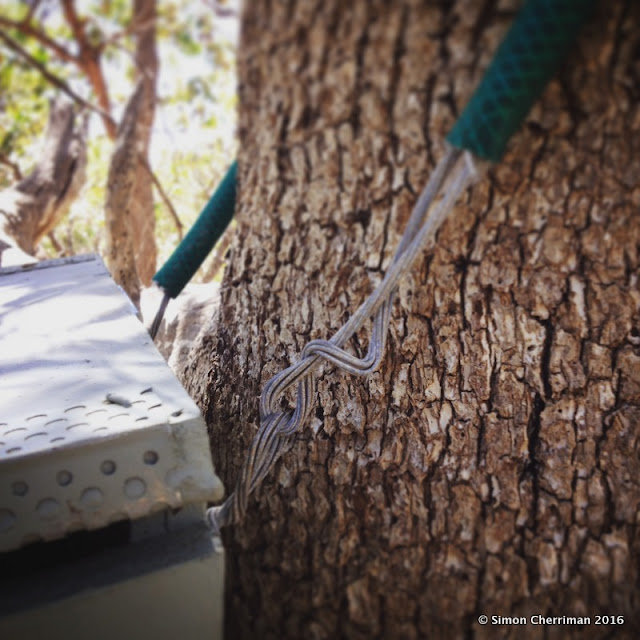 Each box is installed using a length of multi-strand, galvanised wire, threaded through a piece of old garden hose to protect the tree's bark. A loop is twisted in one end of the wire, and the other end is pushed through holes drilled in the back of the box, and passed around the trunk above a forked branch. Then the loose end can be threaded through the loop and twisted to secure it in place, and finally tucked away into the hose. This method follows the idea of Alan and Stacey Franks whose book 'Nest Boxes for Australian Wildlife: A Practical Guide' has been a valuable reference to me since I began building boxes as a teenager, and as I have found over years of nest-boxing since, there are many benefits of using it. It is quick and easy, requires only a few basic tools, ensures virtually no damage to the tree is caused, and it allows the box to be moved or taken down easily if necessary. Alternative methods used to mount nest-boxes which involve drilling and bolting into the sapwood are short-term, because as the tree trunk thickens, the box is gradually pushed outwards and will eventually fall off. These practices also cause unnecessary damage to our precious trees, which are already under enough pressure with climate-stress, disease and insect attacks. 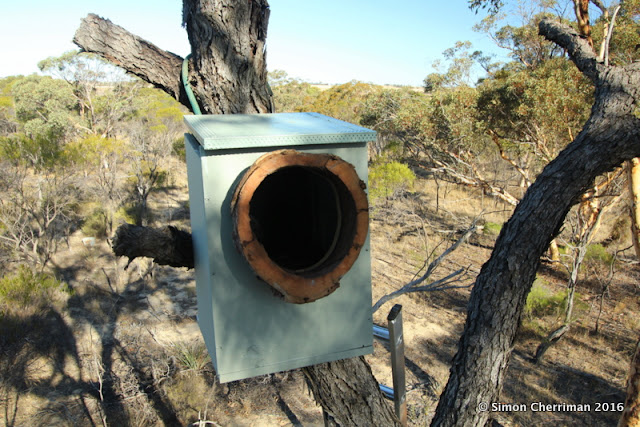 Once the box is in position, it is easy to observe some of the design features I used for this particular batch of boxes. The entrance diameter is about 200 mm and the length of hollow branch (sourced from firewood piles) is relatively short - only about 150 mm. 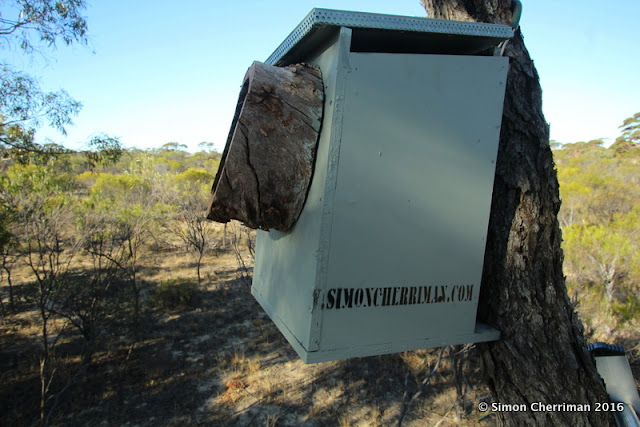 The natural Gookamit nest-hollows I've recorded have all been quite shallow and with a mostly horizontal orientation, so while constructing these boxes, I decided to keep the depth of the nest-chamber less than 150 mm. This will hopefully assist deterring unwanted species like Galahs, which prefer a deeper, vertically-oriented nest chamber. Once installed, the inside floor of each box is filled with a natural substrate (mostly decayed bark or termite excreta, and a few leaves) gathered from the base of the nest tree. As with all nest-boxes, coarse, well-drained material is best as it closely replicates the substrate inside a natural tree-hollow. 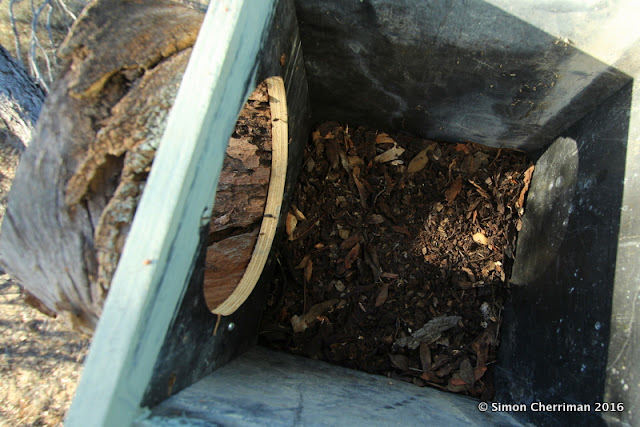 Most of the Wheatbelt sites we visited were composed almost entirely of stands of very young trees (like the one mentioned above), but there were some places with several mature eucalypts. Although large enough and having the potential to have lost limbs and hollowed out, however, these trees still either lacked large hollows, or had a few smaller ones that were being aggressively defended by Galahs. 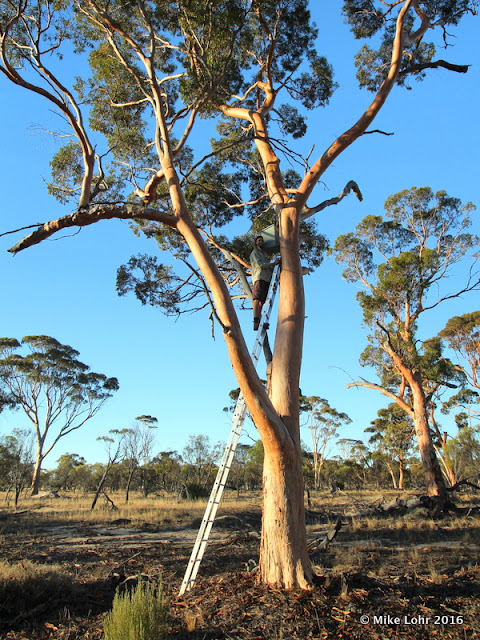 One spectacular stand of Salmon Gums (E. salmonophloia) was particularly memorable as the trees were so tall and captivating! Mike and I chose the above specimen for the owl-box, and it was beautiful to see the the box's hollow front (made from a faded piece of Wandoo E. wandoo) matched the stunning pink of the Salmon Gum's bark perfectly. It was obviously meant to hang here!! 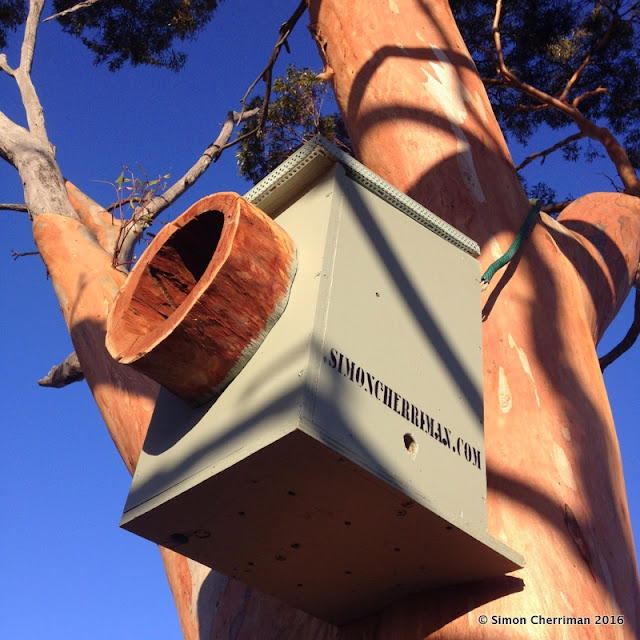 Despite the difference in vegetation composition at Mike's Perth metropolitan area study sites, being patches of Jarrah (E. marginata), Tuart (E. gomphocephala) and Marri (Corymbia calophylla) among the Swan Coastal Plain's beautiful Banksia woodland, the theme of younger trees lacking hollows was consistent. Local Jarrahs, whose particularly hard 'termite resistant' timber was extensively logged during the 20th century, are still in the process of recovery and maturation following the cessation of logging. Research has shown that it takes more than 500 years for a Jarrah to form a hollow with an internal diameter of 300 mm, so many individuals remaining in our bushland are a long way from becoming habitat trees.


It was therefore a wonderful feeling to know that the artificial hollows Mike's study was providing would be very useful habitat for wildlife in general, not necessarily just the boobooks we were targeting. As I like to emphasise in my nest-box building workshops, the provision of any box in an area lacking tree hollows will create habitat for some wildlife, even if it is not a conspicuous vertebrate like an owl. It is easy to assume that a box has not worked if the target species doesn't use it - however, with this 'inside the box' thinking, we tend to forget it will still likely benefit smaller wildlife like skinks, geckoes, cockroaches, moths and spiders, all of which play a role in keeping our environment healthy.

Mike will be monitoring the owl boxes during the breeding season later in the year to check their occupancy. To keep track of the project, please visit his Boobook Research Facebook page. I can't wait to see who (hoo, hoo!) takes up residence! :-) 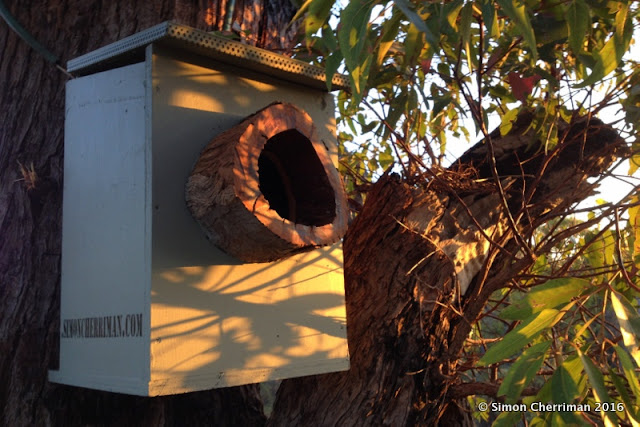