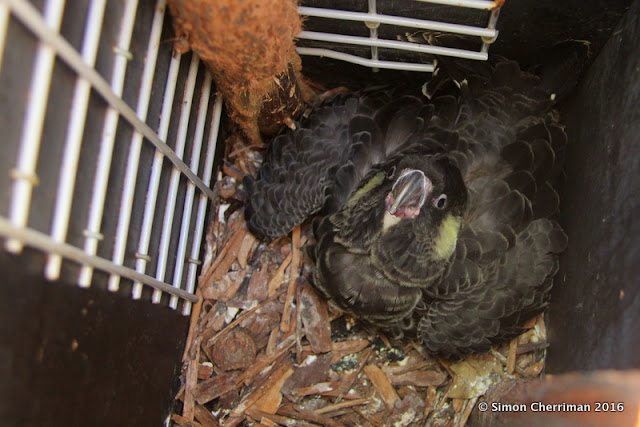 When you last checked in for an update on the Ngolyenok (Carnaby's Cockatoo) nest-box in the Mundaring Shire a nearly 2 months ago, you might remember that it contained 2 eggs, something I found very surprising given my expectation on that day for the box to contain a large chick. The conclusion was that the first breeding attempt had failed, but the 2 eggs meant a second pair was still incubating and there was a strong chance for a favourable nesting event. Last week I scaled the tree, peered inside the nest-box, and was thrilled to discover the above sight - the eggs were gone, but in their place was a healthy, 6-week-old cockatoo chick! Today, a small community group including WA Museum ornithologists, revisited the bush reserve for the chick to be weighed, measured and banded. 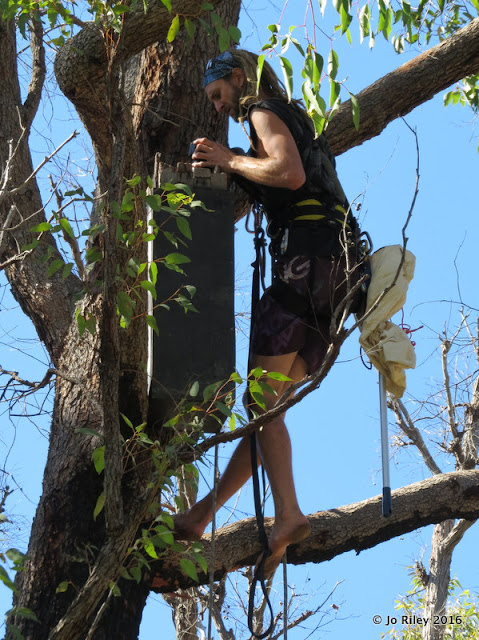 With a special chick-wrangling 'net-pole' hanging from my harness, I ascended my rope to the nest box, a climb that by now was becoming quite a familiar routine! It didn't take long to lift the chick gently into the bag, tie it safely shut, and lower it down to my friends Jeff and Jo on the ground. Ron Johnstone and Tony Kirkby from the WA Museum kindly allowed me to band the chick, which involved placing a specially designed, uniquely numbered aluminium ring on the bird's leg for identification. There was then time for a few photos of the precious nestling before I returned to the canopy and placed him back inside the safety of his (artificial) hollow home.


When I returned to earth I paused for a brief moment to reflect on the situation: this nest box was installed less than 12 months ago and had cockatoos using it within 3 months. Now a beautiful endangered bird had successfully been reared, and another had fledged from a nearby natural tree-hollow that remained a secret until the nest-boxes inspired us to begin monitoring cockatoo behaviour during Kambarang (spring). Now, there was the start of a potential breeding population, right here in the magic Mundaring! What will this year's breeding season bring?

Visit this link to read the ABC's news story on this exciting day in the Perth Hills.
Posted by Simon Cherriman