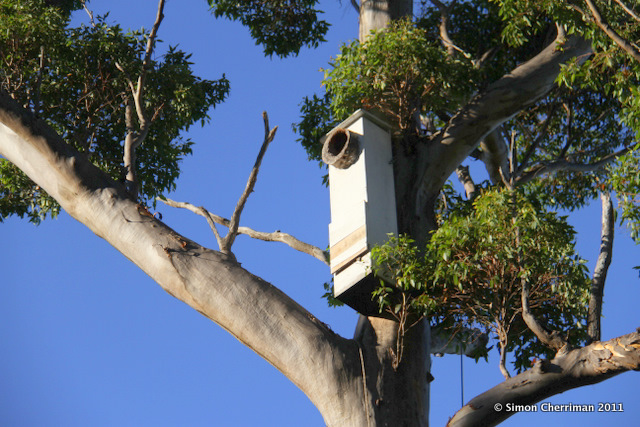 Three years ago I spent a day hoisting a nest-box designed for Black-Cockatoos high into a Karri tree at my friend Jeff’s block near the Porongurup Range. The box was made partly from Form Ply scavenged from a skip bin, partly from Jeff’s Nanna’s old wardrobe, and was over a metre deep. On that day back in November 2008, just as I’d fixed the box in place, a pair of Carnaby’s Cockatoos flew in, passed the box and landed in a nearby Karri. Then one of them climbed down and entered a vertical slit-shaped hollow in the side, and it turned out to have a chick inside! I was worried that ‘my’ new box was too close to an existing nest, and would never be used.

A trip back to Jeff’s block was on the cards for New Year’s Eve 2011. A friend of ours who owns another bush block nearby had reported seeing a pair of Carnaby’s Cockatoos (Calyptorhynchus latirostris) perched near the box and chewing its hollow front a year earlier. Jeff arrived yesterday and gave me a call to say that he had also seen a pair of cockies roosting above the box. They arrived just after sunset and were very vocal early the next morning. I was itching with excitement! 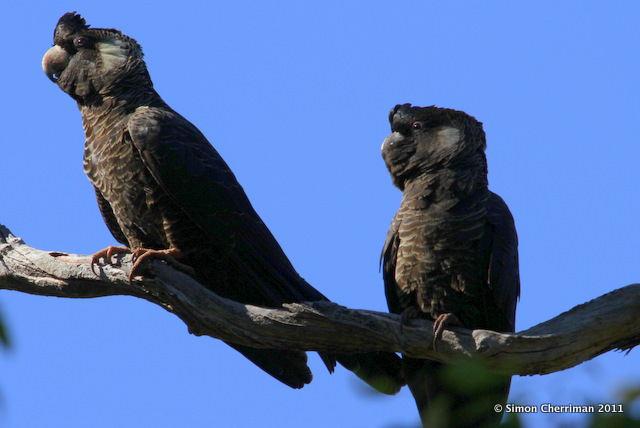 We arrived down at the block about lunchtime today, and I soon got out my climbing gear and set up a rope to the first big limb, below the nest box. I ignored the bark-scrapes to my legs as I began the climb, eager to reach the box. I made it to the first limb but still needed to throw a rope over the limb above the box in order to reach it safely. This took about ten attempts and nearly made my arm collapse with tiredness! Eventually the coil hit the spot and I changed ropes and carried on upwards. I was now level with the box. I then stepped onto a thick limb, feeling the cool sensation of Karri bark on my bare foot, and reached around the main trunk with my safety line. It wouldn’t reach, so I glanced down to gather more slack.

Something was crawling on my foot. At first I just experienced the sensation of six little legs touching my soul, but then, as I pivoted my foot upwards, the body shape of the insect was clear. It was a BULL ANT! I’d copped many a bite from these critters before, not the sort of welcome to the canopy I wanted! I flicked my foot, and he clung on. He walked down toward my toes. I rolled my foot sideways, hoping he would fall of the side, but he climbed around the edge of my foot and carried on across my soul. I flicked again, and he moved over my heel. Get OFF!! My hands weren’t free and there was no way of flicking him off. I pressed my leg up against the tree and he climbed off onto the bark. Wheeeew! Nearly got a bite there! Now for the box.

The instant I opened the lid I just knew there was something exciting to find. I heard a raucous, irritated gargle shoot up at me from within the box. I peered in... and there she was. Deep inside her nest-box home, a Carnaby’s Cockatoo chick. THRILLING! The pale bill told me she was a female. The joys of making homes for wildlife out of human rubbish... and having an endangered species move in.

What a perfect way to end the year :-) 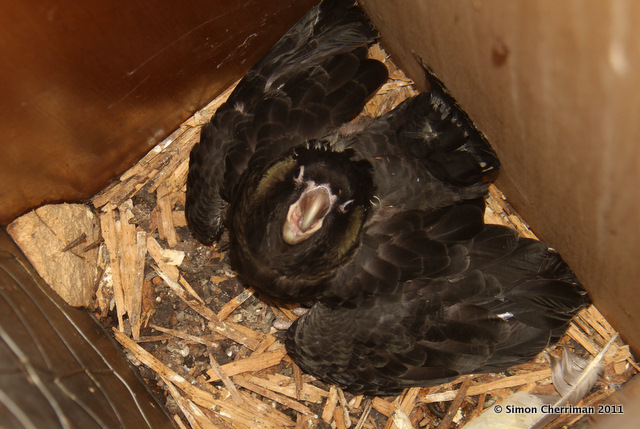