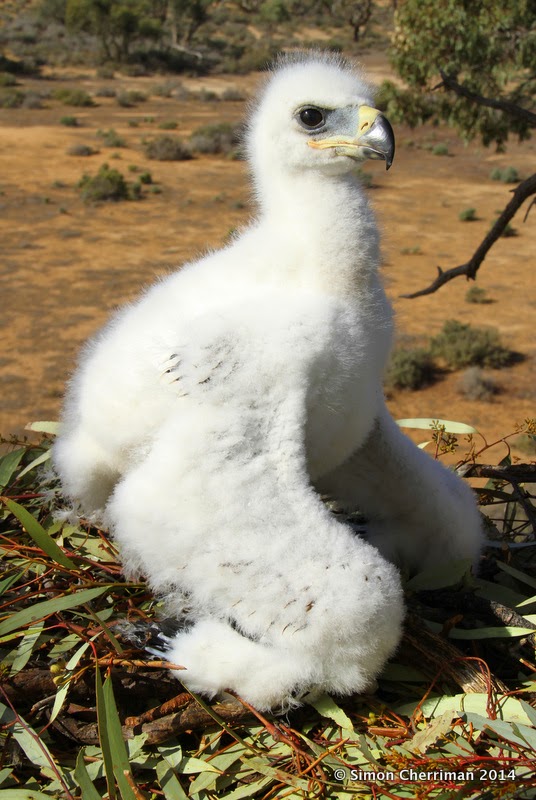 During the last few weeks of travel from Mudgee to Perth (5840 km) I've found 55 Wedge-tailed Eagle nests, 12 of which have been active. I thought I'd write a few stories about what I've seen, and of course share a few photos!

Above you can see one of the first wedge-tail chicks of 2014, taken in western NSW. This eaglet is just starting to pin (have its wing feather emerge) which puts it at about 4 weeks old, and means the eggs on this nest were laid in early May, a very early breeding attempt for this pair. The other active nests I've seen this month have all had females still sitting tight on eggs. Although their is some variation depending on local conditions, the majority of wedge-tail eggs are laid in June and July right across Australia, so it was exciting to unexpectedly come across a fluffy white chick!

It was interesting to find that another nest located only about 5 km away still had eggs being incubated, perhaps an indicator of how influential conditions in the exact eagle territory really are on the timing of breeding. I climbed the nest and found a freshly killed Emu chick on the edge, probably brought in by the male earlier that morning (we actually observed a male Emu, with three similar-sized chicks, only a few hundred metres from the eagle nest!).

These eggs might've been due to hatch any moment, as after circling for a short time, the female returned to brood her eggs while we were still walking back to the car. You can make out her silhouette in this photo: 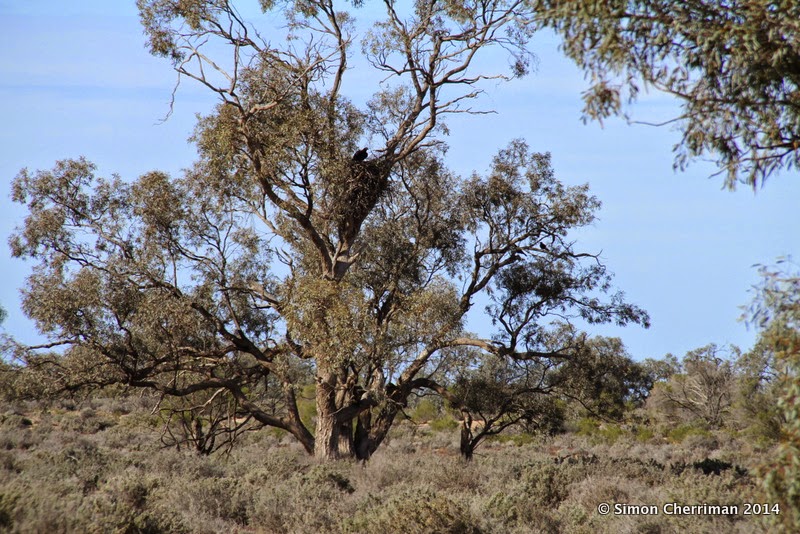 This was the start of better things to come. In relation to brooding females, a real point of interest to me this month has been the adult eagles' tolerance to human presence near their nest site, a stark contrast to behaviour I've observed for many years in Western Australia. It's not abnormal for a wedgie to flush when it sees a person approaching several hundred metres or more from its nest. But at three sites in arid NSW and SA, the eagles' response (or should I say 'lack of response') has been astounding. Here's a 'Where's Wally' shot to begin with. You can just make out the brooding female eagle's head, eyes looking right at me, peering out from behind the curtain of gumleaves covering her eyrie. 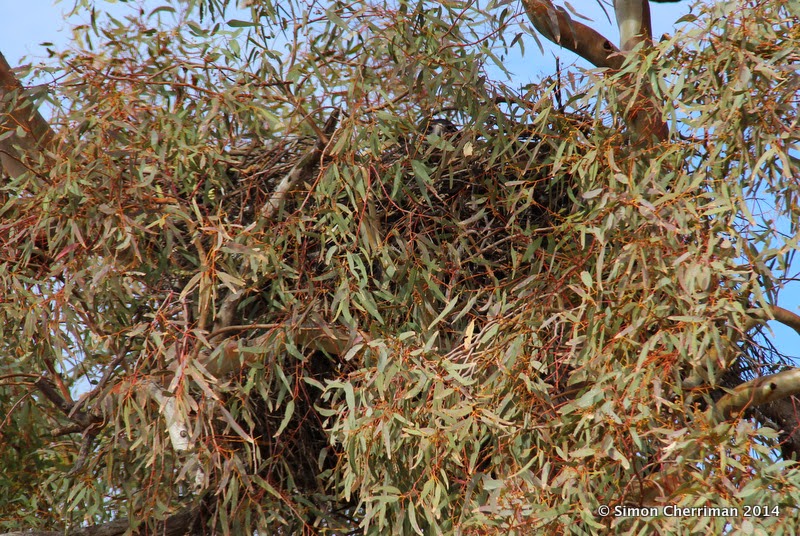 This wedgie didn't budge while I wandered around under her nest for a few minutes, and she kept up her piercing stare as we climbed back into the car to leave. It was amazing... but I met an even more tolerant female a few days afterwards, who peered down at me in a similar fashion as I stood beneath the nest tree and took photos. Her nest was probably the smallest I have seen, and barely seemed to be big enough to accommodate the sitting wedge-tail. I spotted it 50 m in from the dirt track we were driving on, and my first interpretation was a crow nest with a large plastic garbage bag flapping in the breeze - this turned out to be the eagle's massive tail feathers! 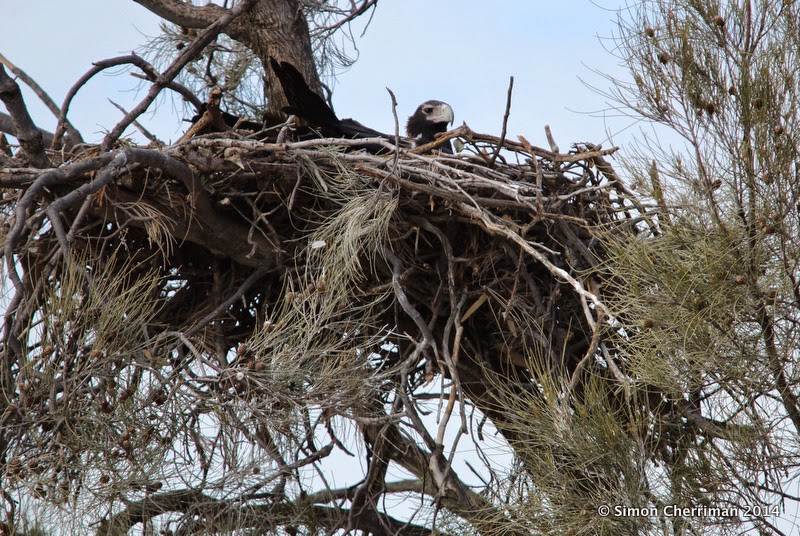 As if the above encounters weren't enough, my visit to the third site in question really was something else. I was fortunate to be shown this location along a seasonal watercourse in arid SA by good friend Kylie Piper, who visited the area last year. You can see the eagle eyrie, which has a gorgeous surrounding of fresh plant growth and desert wildflowers, in the top of the tallest tree in this photo: 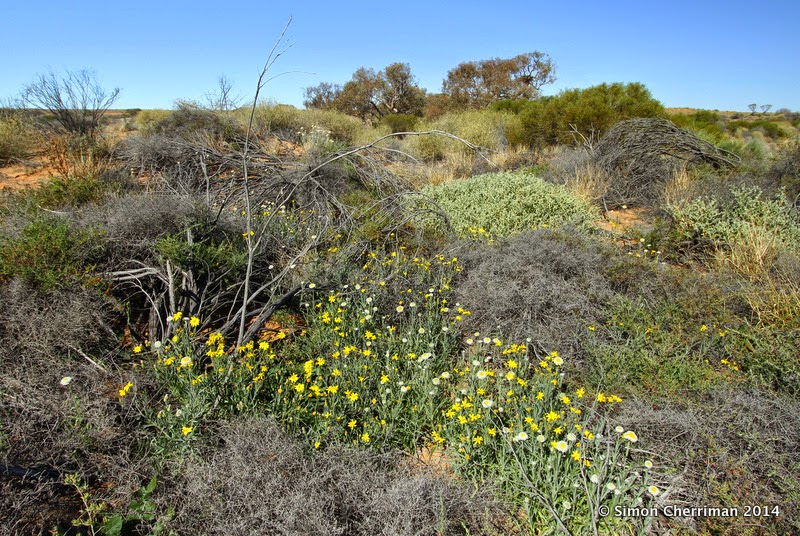 As we approached the nest I could make out the shape of a bird sitting. It was the female, judging by the size of her bill, and the nest on which she sat was clearly a new one, being quite shallow and having plenty of loosely piled branches, not heavily compressed and faded like those of a nest years old. Despite its freshness the local Zebra Finches clearly hadn't taken long to find the eagle nest - several pairs had already constructed their neat, grassy domes into the side and the birds buzzed around like little flies. Can you spot the two finches in this photo? 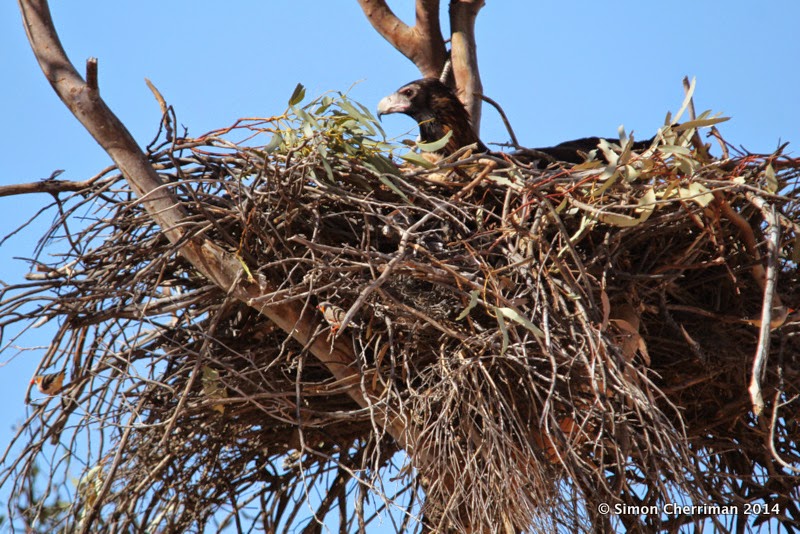 The male eagle suddenly flushed from a low perch beneath the nest, and to my surprise, he flew very near to me and landed on a sand dune only ~30 m from the nest. He stood guard as I walked slowly along the sandy river bed and allowed me some very close photos. The sitting female remained incubating and looked right through me as though I was invisible. I didn't know which way to look! Two of the most beautiful eagles were within only 20 m of me, and they could see me, but they had an air of tolerance that was incredible. I turned to walk away and the male launched himself from the dune just as I pressed the shutter, resulting in the below photo.

Never before had I encountered eagles at such close quarters for so long, without being concealed in a hide for hours and hours. The wedge-tail is in my experience a species that takes so much time and effort to obtain pictures of, and at the nest it is normally quite unapproachable. But this pair had allowed me into their world, albeit for a few minutes. It was certainly a day I would never forget! 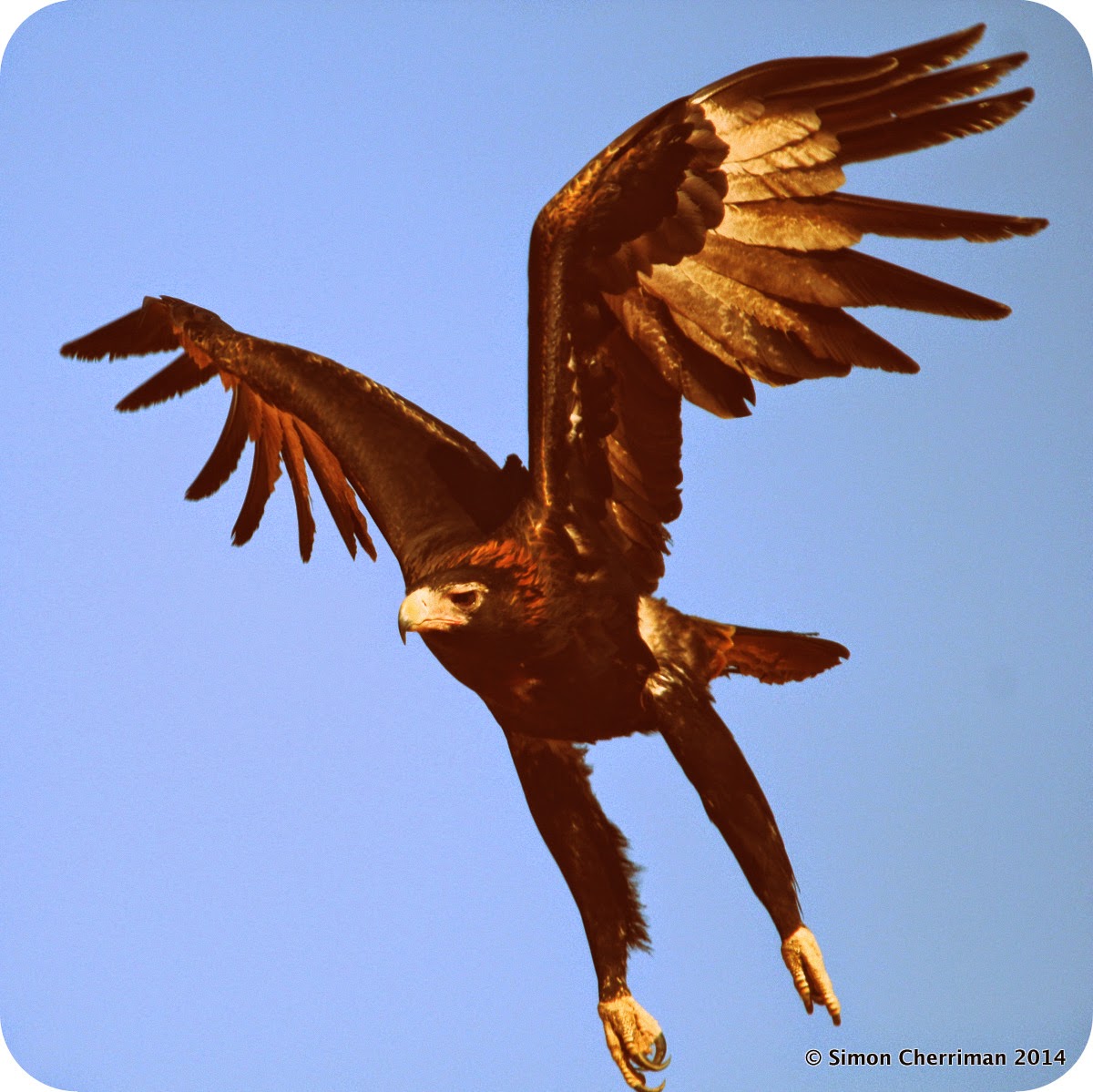