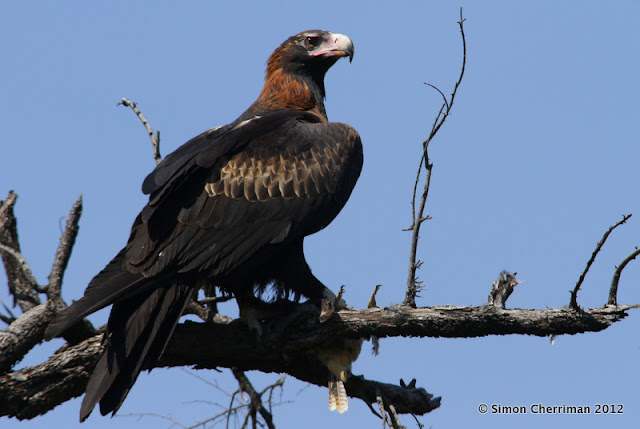 If you look carefully, you can see something grasped firmly in this majestic-looking Wedge-tailed Eagle’s talons. The victim, whose lower bill I recovered from beneath the tree, was an iconic bird of the Kimberley - a Blue-winged Kookaburra (Daecelo leachii). This was one less bird that would wake us campers up at dawn! He (I knew the kookaburra was male from discarded tail feathers) was almost certainly caught live by either this eagle or her mate this morning at El Questro Wilderness Park.

When Gavin Scott (an El Questro Ranger) excitedly rushed over to tell me about seeing an eagle feeding, I didn’t expect we would return to the scene and find the bird still there. But as we drove slowly along the dusty road and I glanced out the window eagerly, I focused instantly on a dark shape perched on the highest limb of a Bauhinia tree, only 20m from us. An adult male Wedge-tailed Eagle! Gavin quickly pointed out that it was not the bird he’d just seen feeding. Then we saw movement and noticed the female was perched just below him - not one eagle but TWO!!

I shot some footage of her ripping the kookaburra to pieces and even filmed her eating the whole top of the skull! She didn’t seem fazed by me as I snuck out of the car, so I circled around to her north-western side to have the sun at my back. Just the right lighting for a good photo. I snapped a few of the male (below), then started approaching her. She stopped feeding when I got to about 10m, then flew shortly afterwards. 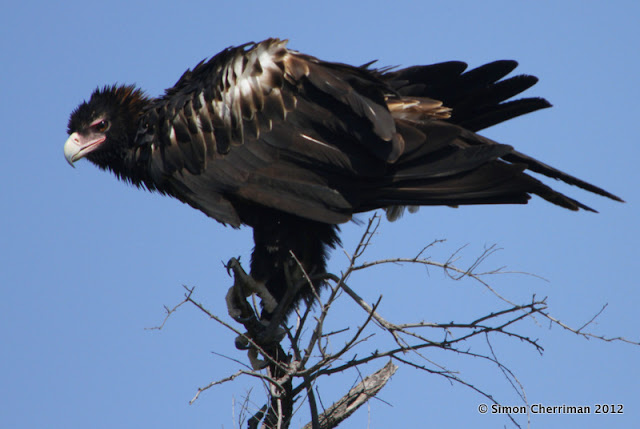 Many doubt the Wedge-tail’s capability at hunting birds on the wing but I firmly believe that the smaller and swifter male finds it easy. A few weeks ago I observed a family trio of  wedgies hunting black cockatoos and their agility astounded me - they flapped furiously and split a flock up to single out just one bird, staying low to the ground, flapping upwards and plummeting to gain momentum, before disappearing below the treeline. Combined with their sheer patience, skill at ambush and manoeuvrability, it wouldn’t have surprised me if the male eagle had captured this kookaburra after a pursuit (albeit a short one) through the air. My instinct also told me he had captured it for his mate because she was about to lay eggs.

I found their nest, pictured below, in a stunning Boab tree, high up on a rocky escarpment during my visit to El Questro last year. This year I’d checked it again and it was freshly lined in preparation for breeding very soon. The female eagle needs peak body condition in order to produce eggs and it is quite possible that some extra snacks are provided by her soulmate, whose loyalty to her during the breeding season is immeasurable. I’ve watched eagle behaviour for countless hours and when you see a male perform aerial courtship, bring prey to the nest or take over an incubation shift, you can see how dedicated he is.

I’m really looking forward to hearing updates from Gavin Scott about the breeding progress of this pair of eagles. Keep watching this News section for updates! 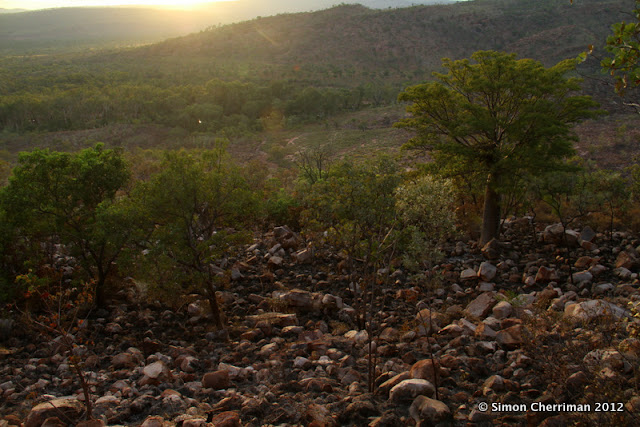