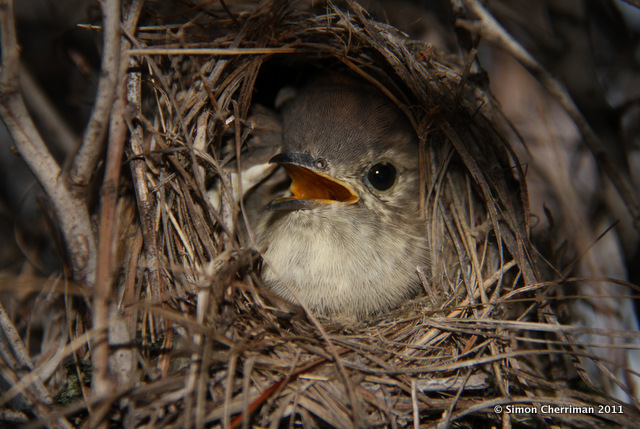 Does this baby bird look too big for its nest? That’s because it is!

I had a quiet afternoon stroll along the bridal trail between Parkerville and Stoneville yesterday, and there were birds everywhere! Honeyeaters, wrens, thornbills, parrots, ravens, magpies, whistlers. The air was alive with their song. As I walked I glanced into nearby shrubs, keeping my eyes peeled for birds’ nests. And then I spotted this one: a tiny, domed nest with a side-entrance which I knew straight away belonged to an Inland Thornbill (Acanthiza apicalis). When I peered in closer to inspect the nest, I noticed its occupant was HUGE! And I realised it was a baby Bronze-cuckoo, probably a Shining. I snapped this photo of it eagerly poking out the entrance awaiting the next meal, when something amazing happened.

The cuckoo’s ‘parents’ suddenly appeared and began the most incredible performance of warning and alarm calls... but what made them amazing was that they mimicked. I already knew this species was a clever mimic, but these two individuals really showed their capabilities when they rattled off the alarms and songs of about 10 species: Grey Fantail cheep, Yellow-rumped Thornbill tinkle, Red-capped Parrot squawk, Western Gerygone tweet, Brown and New Holland Honeyeater trill, Magpie warble, Rufous Whistler whistle, to name just a few. They really wanted me away from their nest!

What happened next made this little event even more special. The young cuckoo, alarmed by his parents’ fuss, thought “That’s it, I’m fledging!”, and s q u e e z e d  himself out of the nest like a cork out of a bottle! The adult thornbills then came in to his rescue as he fluttered into the neighbouring shrub, all the time their persistent mimicking alarm song filling the air. I snapped a couple of pictures of the newly fledged ‘Cuckoo- Thornbill’ before leaving the birds in peace. The Inlands finished their song with a couple of brisk cheeps, then preened in satisfaction of their 10cm forms fending off a 201cm giant!

Here is the newly fledged Bronze-cuckoo (you can really see where the name ‘bronze’ comes from: note the sheen on his wing and back feathers. Cuckoos have a reputation of being ‘mean’ because of their parasitic behaviour. Is parasitism any ‘meaner’ than a lion killing a newly born zebra? Can something this cute really be considered mean? Nature works in weird and wonderful ways. 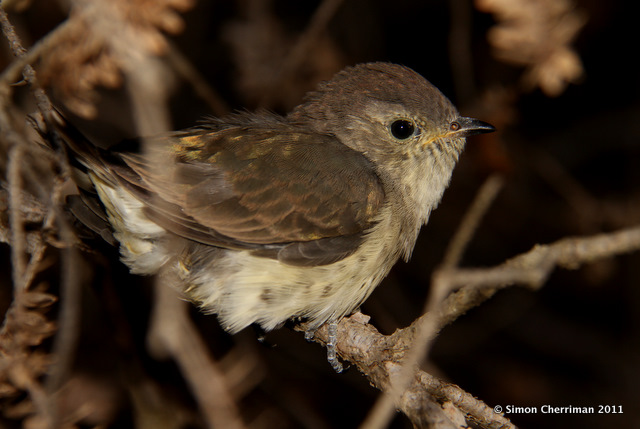