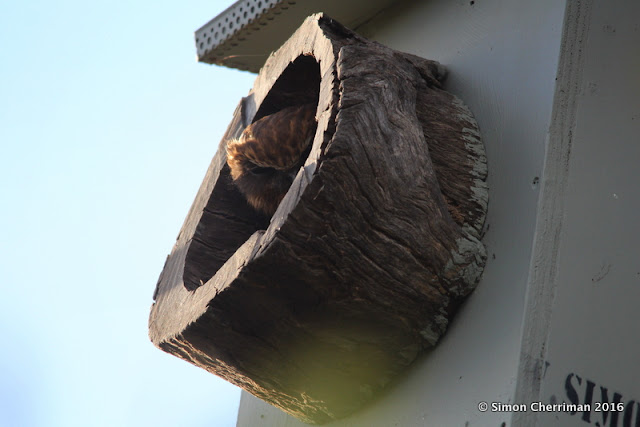 When Mike Lohr rang me with the good news that he'd found a Googamit / Southern Boobook (Ninox boobook) breeding in one of the owl nest-boxes we installed earlier this year, I nearly jumped out of my skin! I could hardly contain my excitement as I tied the ladder onto my roof-rack and packed some camera gear into the car. Bill Brown, a friend from Tasmania who had just arrived to help me with eagle research at Matuwa, was also excited to come along and we chatted about our past experiences with owls during the drive down to meet Mike at a bush reserve in the Perth suburbs.

As we approached the nest tree, an adult boobook peered out from inside the nest-box, keeping a half-closed but watchful eye on us. Leaning the ladder against the tree trunk was enough to cause her to launch from the box and swoop in a silent glide to perch in a nearby Banksia. As I slowly scaled the rungs, I was very excited about what I might find, and still tingling with excitement that the target species had nested in a box designed especially for it! This was the first record of owls using one of my nest-boxes, and it is always interesting to be able to have a intimate insight into the nesting habits of a less-common, nocturnal species. 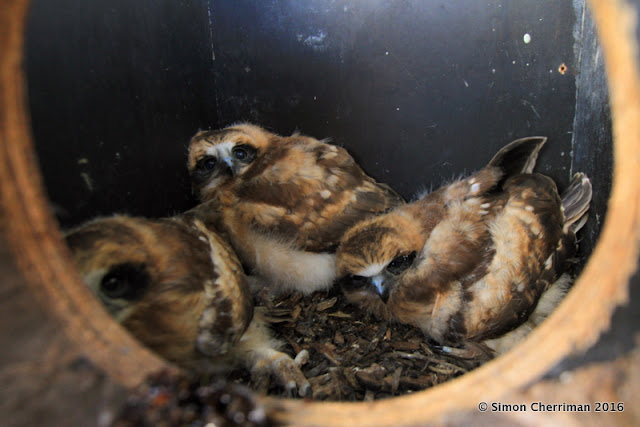 What an amazing sight! THREE juvenile boobooks sat low in the nest chamber. As I snapped a few photos, the owlets gave me occasional winks and made clicking noises with their bills, warning me to keep back. It was interesting to note several regurgitated pellets on the floor of the nest-box's hollow entrance, which mostly contained insect exoskeletons, and also, to my surprise, a scatter of green, orange, yellow and blue body feathers belonging to a Rainbow Lorikeet (Tachyglossus haematodus). Several bright green and yellow tail-feathers, also belong to this species, lay on the floor of the nest box chamber.


After lowing the owlets down in a calico bag to Mike, I watched while he weighed, measured and banded them, took a blood sample for health analysis and collected parasites. This work is part of Mike's PhD research investigating the impacts of fragmentation on the Southern Boobook, which has been recorded as declining for the past decade or so. I was very fortunate to be given the opportunity to supply and install nest-boxes for a part Mike's project testing whether nest sites are limiting their presence in urban and agricultural areas. Breeding records inside easily accessible boxes like this one allow broods of owlets to be given health checks and marked to help collect information on factors affecting their survival - and they also allow an up-close look at some of the most beautiful young birds one can find in the bush! 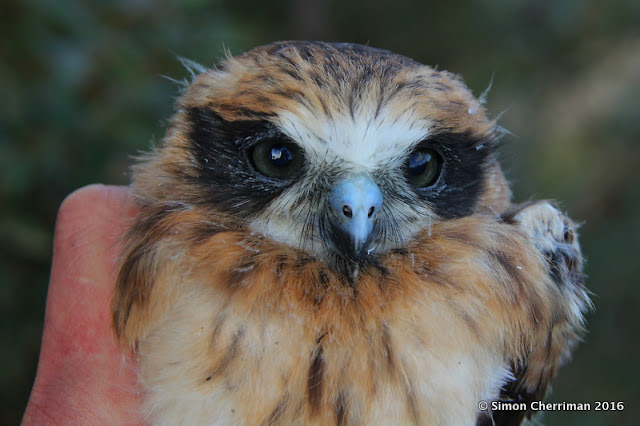 When all the data had been collected, it was time to return the owlets to their nest. I scaled the ladder, hauled the calico bag and its precious contents back into the canopy, and gently lifted each bird out, one at a time, and lowed it inside. As I leaned inside the box, a pungent odour of ammonia filled my lungs, a result of the bed of decaying regurgitated pellets which had accumulated during the past few weeks. Seemingly oblivious to the smell, the owlet trio peered up at me and continued to blink their wonderful, wide eyes. It would only be a week or so before they would begin putting these to use, making their first flight from the nest box into the nocturnal world. 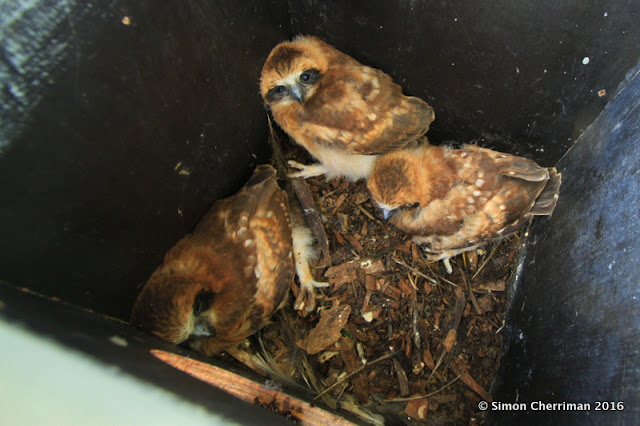