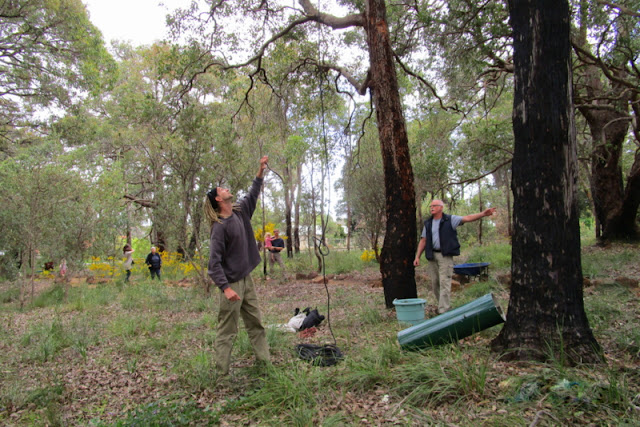 A stones throw from the house where I spent the first 6 years of my life, in the beautiful Perth Hills suburb of Lesmurdie, is a small patch of remnant Jarrah and Marri forest managed by a group of friendly locals. Among them is David Ryder, an old family friend who I've known for over 25 years and someone who shares my passion for collecting materials that many would deem 'rubbish,' and turning them into something more useful (like the wildlife habitat we make in Re-Cyc-Ology Project workshops!). David has recently been obtaining old pieces of PVC storm-water pipe and turning them into nesting boxes for threatened Black Cockatoos, similar to the 'Cockatubes' designed and manufactured by Serpentine-Jarrahdale Landcare. Today I had the privilege of visiting David, Darrell and other members of the Friends of Vernallen Reserve, who were keen to have a couple of the cocky boxes installed, and who had agreed to swap some of my tree-climbing skills for some delightful afternoon tea!

The group had spent the morning busily raking leaves and collecting twigs to reduce the flammable fuel load in preparation for the upcoming bushfire season. Such work was coordinated by the local community and it was fantastic to see a friendly bunch of people combining forces to output such an efficient work-rate. It made me wonder why more energy isn't spent on pushing for this type of 'grass-roots' approach to fire management in other parts of the Perth Hills. Instead, we seem in many places to have a feeling that government authorities should manage public lands, even though we all live in and benefit from a lifestyle among the forest.


I chose two suitable trees in which to install the nest-boxes - one Jarrah and one large Marri - and enjoyed showing the group a safe method of hoisting them up and hanging them in the canopy, while at the same time answering questions about the plight of our endangered cockatoos, and what is being done to help their cause. You can read more about the success of my wooden cockatoo nest-boxes in the Mundaring Shire at this news post.

It was wonderful to see the boxes go up, and know a great group of locals is interested in doing their bit to help.