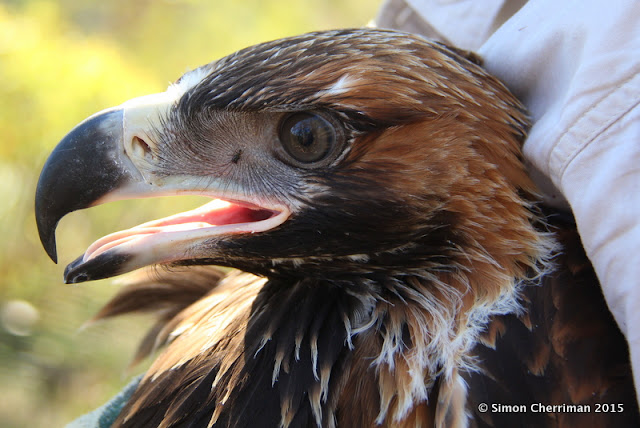 Setting off towards a speck in the distance that is a giant Wedge-tailed Eagle nest always evokes a feeling of excitement, especially when you have visited it two months prior and know the chick you saw then will now be fully-grown and nearly ready to fly. With my mum and sister leading the way, I began the descent into the rugged Perth Hills valley, clutching the straps of my backpack to ease the load of heavy climbing gear, ropes, cameras, lenses and eagle-banding equipment on my shoulders. 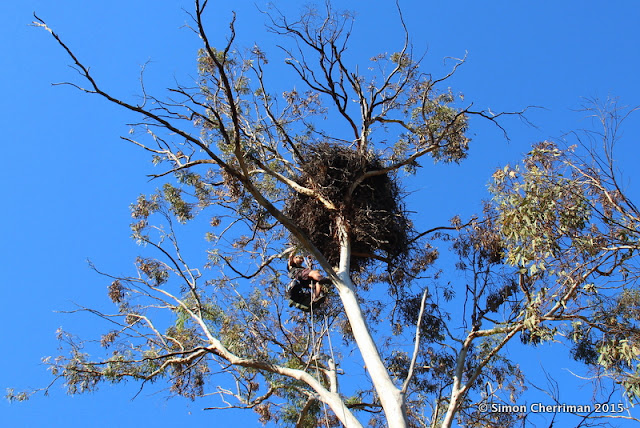 An hour later, the three of us stopped in the shade of the Wandoo nest tree, which was now quite a bit taller than when I first climbed this particular eagle nest 16 years ago. The nest, too, had increased substantially in size, being more than 2 m deep and just as wide, making me look like a midget as I ascended my rope to just below the nest, and peered over the edge. I was delighted to see not one but two eagle chicks, an indicator that food supply in this territory had been ample this season, and that the adult eagles were probably experienced breeders. It was an extra special feeling after making a similar discovery at Matuwa (Lorna Glen) just a few weeks prior – 2015 must be a lucky year for ‘twins’!).

As part of a long-term study on Wedge-tailed Eagle ecology in the Perth region, I have this year obtained the relevant State and Federal licenses to commence marking individual fledgling (juvenile) eagles with leg-rings (bands). A stainless steel ring from the Australian Bird and Bat Banding Scheme (ABBBS) is placed on the right leg, and a yellow colour-ring (custom made by IO Mekaniska in Sweden) with a 3-digit number is placed on the birds’ left leg. The only other colour rings being used on Wedge-tailed Eagles in Australia are the blue ones at Matuwa in the WA Arid Zone, where I have also been researching wedge-tail movements. The idea is that the colour-rings are highly visible and will allow any marked eagles, if they are re-sighted in the future, to be identified as a juvenile from one of the two study areas: Perth (yellow) or Matuwa (blue). If the number can be read, we can then tell exactly which nest site the eagle came from. And yes, you are right: I have chosen these two colours to match those of the Aussie Rules football team whose mascot is the majestic eagle from the West Coast ;-)

While mum held onto one eagle, my sister and I recorded measurements from the other, then we swapped over. Apart from standard morphometrics like weight, wing length, tarsal (lower leg) length and head-bill length, another measurement being taken is the length of the rear talon, and it was amazing to record the female eagle had a rear talon of just over 40mm, quite a weapon! Imagine being a small animal on the receiving end of that one day! 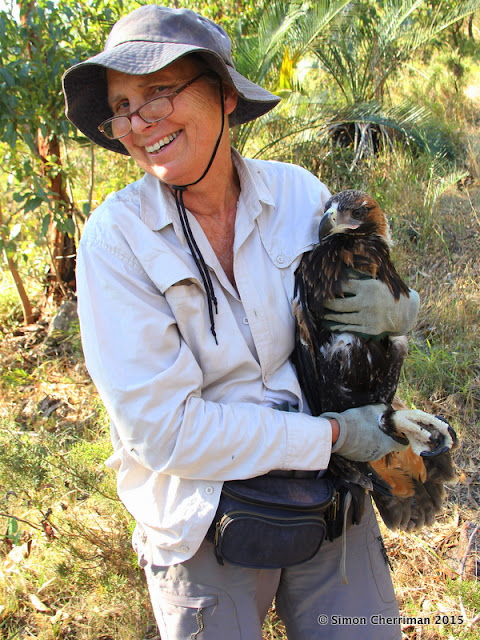 When both eagles had been ringed and processed, I ascended my ropes again to return them to their nest. With such well-developed wings, one has to be careful that eagles do not 'fledge early' and fly from their nest in an escape manoeuvre prompted by a person releasing them. My trick is to hang from my climbing rope just below the rim of the eagle nest, remove each bird, one at a time, from the handling bag, then release them upwards onto their nest. I find as soon as the birds' wings are out, they hold them up and flap slightly, and when their legs are released, the birds basically flap themselves back onto the eyrie. By hanging below the nest one is effectively out of sight, and not causing the looming threat that a person would if they were hanging level with or above the nest and towering over the eaglets.

It was wonderful to look back across the valley and see both juvenile eagles standing on their eyrie, exercising their very well-developed wings and peering out across the valley, and probably watching my every footstep, just as they had been earlier in the afternoon. The adult birds, highly alert to every movement in the vicinity of their nest site, were also watching with piercing eyes as three small specks of human ascended the opposite hill and climbed into their car. What an exciting afternoon - for all seven of us. 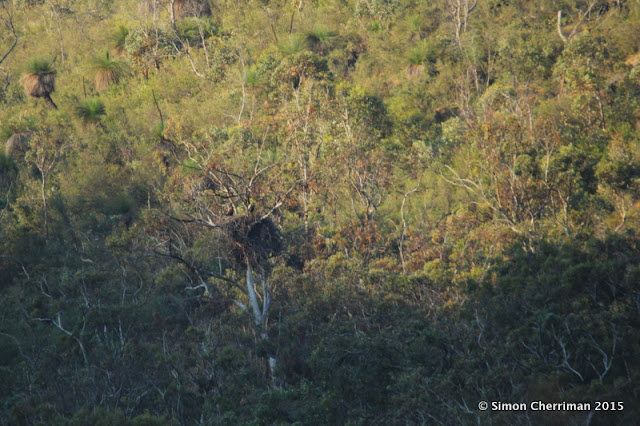 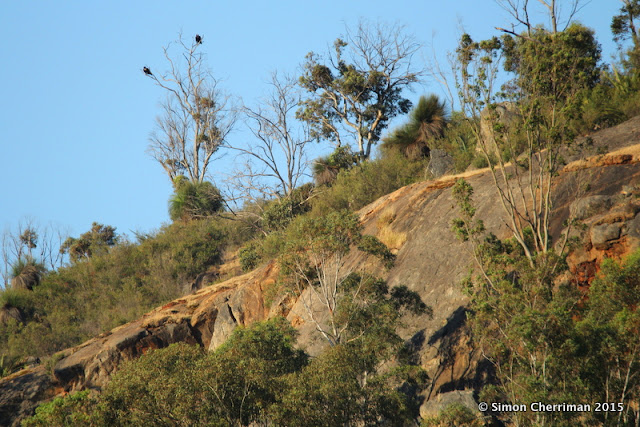