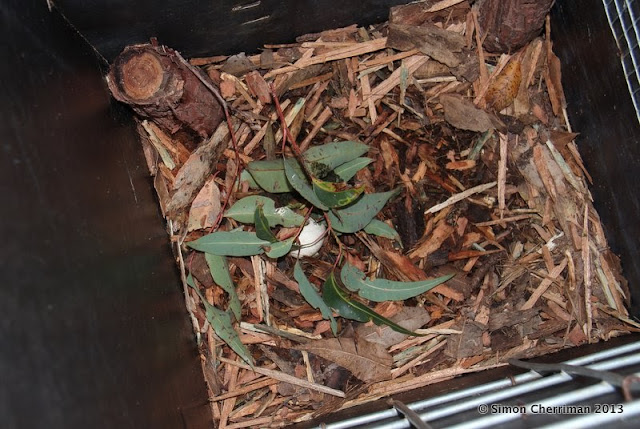 Not every nest box story ends in success, as we found out today in Sawyers Valley. You might have read this post about a Red-tailed Black Cockatoo occupying a local nest box. It was a really exciting discovery but sadly the egg failed to hatch.

In the above picture you can see a cold, abandoned Red-tail egg, covered with a fresh sprig of gumleaves. This may hold the evidence to what the likely cause of failure was: the over-abundant Galah. Also known as 'Pink and Greys', Galahs are the only cockatoo species which use any form of lining inside their tree-hollow nests, bringing in dozens of sprigs throughout the year to adorn their permanent home. The owner of this nest box, Brad Mitchell, had unfortunately observed Galahs harassing the female cockatoo during her incubation shifts for several weeks. The birds would sit on the top of the box, noisily squawking at her and chew at the entrance. Even though she had put up with this for nearly 3 weeks, perhaps there was only so much of this persistent pestering she could take. Once driven away, the Galahs could commence their occupancy and begin to line the nest for their own use.

Another option is the week of very heavy rainfall (we've had over 70 mm in the last 7 days) was too much for the cockatoo nest, and being a vertically oriented box with an open top, perhaps the bird became too wet or the egg chilled.

Whichever the case, this story provides a good example of the impacts of an over-abundant bird on a threatened species. If biodiversity conservation (preservation of as wide a variety of native plants and animals as possible), the Galah really should be culled on a landscape scale to reduce its population size. You can read more about Galah impacts in my previous blog post here.
Posted by Simon Cherriman