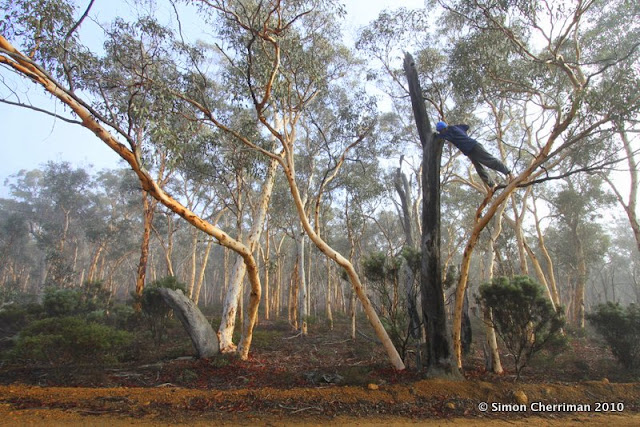 After more than 10 hours concealed in a wildlife hide, Adam and I struck wildlife photography gold today when we were lucky enough to film a family of Australian Shelducks (Tadorna tadornoides) emerging from their nest hollow. This marks the highlight of my year so far making A Wedged Tale and one of the highlights of my life!

During a misty morning in WA's south-west we were driving along a small dirt track when a male Shelduck caught my attention. He was walking around at the base of a Powderbark tree which had a large dead trunk and a couple of smaller regrown saplings. Ducks are normally found near water and I knew the only reason one would be in the middle of the forest was for nesting. Like several native Australian ducks, Shelducks often choose a large hollow inside a tree in which to lay their eggs. I stopped the car and climbed out to investigate, and sure enough the dead tree contained a nice hollow spout about 5 metres above the ground. Closer inspection not only revealed a nest inside the hollow, but a female duck sitting on her eggs! As I took a photograph of her, I heard faint cheeping sounds which told me she was in fact sitting on a brood of newly hatched ducklings. This meant only one thing: the ducklings were due to emerge and we had to film them!

Adam and I sprang into action and constructed 2 hides within 20 metres of the nest tree, one directly facing the hollow and another off to one side. This would give us two positions from which to shoot different camera angles. 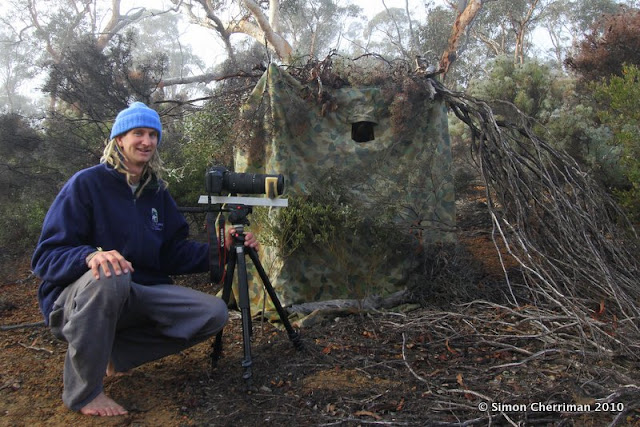 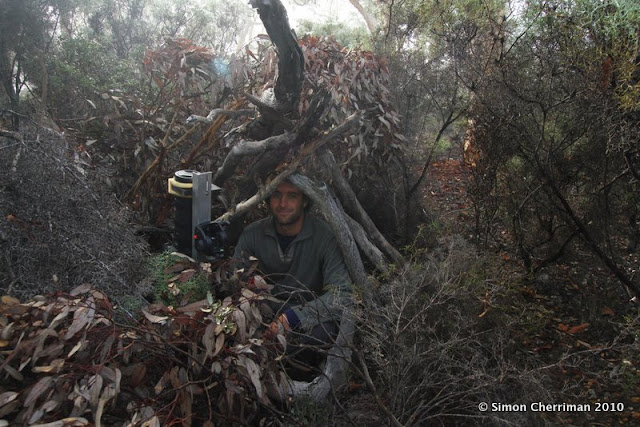 A six hour wait ended in disappointment, however, when the day passed and nothing exciting happened. The male duck returned (we had disturbed him on arrival) and perched in a tree for a while (a sitting duck!), but there was no sign of the female. Feeling like we'd missed out, we returned to our camp with sore bums and imagining the ducklings coming out under the cover of darkness, conditions not suitable for filming.

We decided to return before sunrise the next morning and were very excited to find the male at the base of the nest tree, and the female still inside brooding. We had a second chance! Adam and I dived into our hides again and after a short wait the female began emerging and investigating the scene before here. We hoped the family would hold off their annual event until light conditions improved enough for our cameras to work properly, and for the low-lying mist of Day 2 to subside and stop fogging up our lenses at those critical moments. Thankfully, the sun penetrated the forest, the fog lifted and the timing couldn't have been better for the big moment.

Here's the clip to share with you this wonderful moment: